Also, Toys For Bob totally wants to bring the game to Wii U (and everything else under the sun). 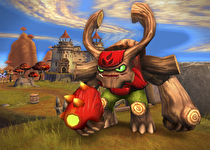 Skylanders Giants is 100% coming to 3DS, according to Toys For Bob's Alex Ness in an interview with ONM. Activision also confirmed that Vicarious Visions, the developers of the first game on 3DS, is returning to make the sequel.

Ness also proclaimed "I love the idea of bringing the Skylanders franchise to everything!" when questioned about Skylanders coming to Wii U and making use of the controller's use of near-field technology, which is what the Skylanders' portal uses.

Much like the previously developed Vicarious Visions Skylanders 3DS game, the title will be "completely different game than the Wii version," according to Ness.

Vicarious Visions just finished Skylanders Cloud Patrol for iOS. They are well known for making Nintendo-exclusive games, such as the Wii and DS versions of Guitar Hero, which added unique functionality.

Skylanders Giants is adding 20 news characters, including eight Giants. Additionally, every character from the original will be re-released in a new pose. Some characters even light up when they are on the portal now, too.

All the figures from the original will work with the new game, but only the new figures will be able to reach the new level cap, which is currently unspecified.

The game is due out this fall.

Good thing level doesn't mean much in the main game.

Awesome news about the new 3DS game.  I hope its not going to try to mimic the console game but instead be a continuation of the 3DS game.  Which is better then the Console game even though it has less replay value.