How Nintendo Does Freemium Business

Why is the Darumeshi Sports Shop owner an Osaka-dialect-speaking Dalmatian?

Until recently many said that Nintendo, focusing only on retail and downloadable digital games at the time, would not be able to survive in the age of the online micro-transaction business model. However, very popular DLC in Fire Emblem Awakening and other recent Nintendo games have proven Nintendo has what it takes. Also worth noting is the sales-rabbit announcing new StreetPass games, which gave us a glimpse of how Nintendo is going to sell games online in an interactive and less impersonal way. Next up is Darumeshi Sport Shop, a Japan exclusive “freemium” 3DS game released in August. This game fully presented a new approach to selling games online, showing Nintendo’s ingenious business model. Not only have they caught up with the times, but they also, to the best of my knowledge, have innovated this brand new business model.

Darumeshi Sport Shop is also the name of the in-game shop run by a middle-aged Osaka-dialect-speaking Dalmatian, Torazi Darumeshi. This is not a shop simulator though. You, or your Mii, are a real customer. When you first download this free game in the eShop, the demo of a mini-game is available. You can play it as well as other purchased games in your in-game house as much as you want. All games I played so far are as simple as microgames in WarioWare series, yet very addictive. Playing such mini-games is just half of the experience of this game. The other half is about the story of Torazi, which unfolds as you buy mini-games, one by one, with your real money. 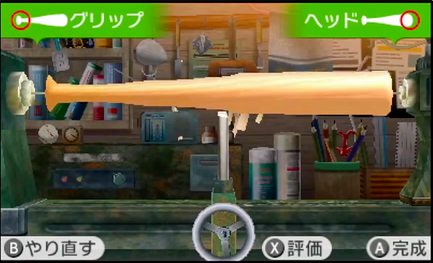 Torazi, a former professional baseball player, sells ten baseball related mini-games and pitches them to the player in a personal way, explaining the aspect of playing baseball that each game focus on. Purchasing some of the games unlocks the next chapter of the story which explains to players why Torazi needs to sell games (i.e., why you, apparently the only customer, are expected to buy mini-games). The reason you repeatedly hear is basically that he has sons to support and that his wife ran out on them. The fact that he has as many as ten children is probably why he is a Dalmatian (likely a homage to 101 Dalmatians). Note that this kind of situation, or having many younger siblings to support but no parents, is a classic excuse for begging for money in Japan. Thus, this game hits you with a good reason to buy mini-games in this shop.

The story, presented in still pictures and texts, is always comical and somewhat interesting. It is not, however, recommended to just buy the mini-games only to see how the story progresses on without playing them. Each of the mini-games is priced at 400 yen, which is, as a son of his says in the official website, pretty expensive for its volume and simplicity. However, Nintendo seems to have no intention to sell them at this regular price. The point is that you can, and are strongly encouraged to, haggle over their price. When you get it right the mini-games can be greatly discounted by more than half. Furthermore, the cheapest price of the games that unlock the next story segment seems to be gradually lowered. When you haggle over a game as much as possible it is always a little cheaper than the one you bought last time. Considering their length and simplicity, they are still not steals, but after the successful haggling you are very likely to feel you got a bargain. 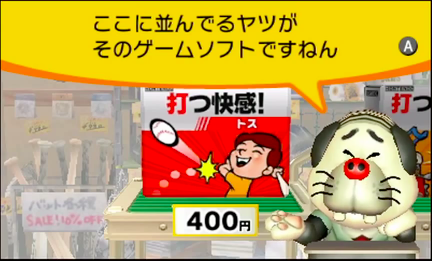 How the game lets you haggle is the most innovative part of this game. All mini-games are mission-based. When you clear a mission you get a few stamps. When you accumulate enough of them you get items for haggling. Items such as boiled eggs (Torazi’s favorite food), one of which is required to start haggling, and key items you need to make the shopkeeper feel like giving a discount. This is probably the first game where haggling over stuff you buy for your real money is an integral part of the gameplay. The haggling process is like a simplified version of the trials in Ace Attorney. You need to choose an appropriate item and what you are going to say to Torazi. Since a son of his serves as an adviser this part is by no means difficult, but a unique gaming experience of haggling over something you are about to spend your real cash on.

The point here is before you buy a mini-game at a discounted price you need to use limited items. This leads you to think you should not miss out on the opportunity to buy games at lower prices. Up until this point you're only ever using your free items in the game at zero monetary cost, but the rarity of the items you're giving away for free encourages you to use real money in the end. I was actually willing to spend real money every time the negotiations ended. The concept of haggling is said to be common, and even an enjoyable, activity in Osaka, but to those who were born and raised in Tokyo like me, haggling is a “foreign” custom. In a way, haggling over games and buying them in Darumeshi Sport Shop felt like I had a virtual shopping tour to Osaka. 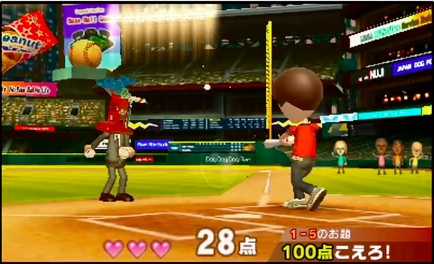 Interestingly enough, this game seems to go about things in the opposite way of other freemium games. For example, the Darumeshi shop does not sell any cheat items that make challenges easier. Additionally, typical Japanese freemium games, and even some recent full price retail games, stop people from playing them by emptying a “stamina gauge” or something similar. The stamina based games then try to sell players an item that replenishes it so they can continue playing sooner. In contrast, the more you play Darumeshi Sport Shop, the more discounted the items get. You're still motivated to buy more games because of the discount, but this typically makes players pay more in the long run!

Typical freemium games tend to avoid mentioning money as best they can until it comes time to make a microtransation, and the sudden sales pitch often breaks the immersion of the in-game universe and tends to piss off players. In Darumeshi Sports Shop, however, Nintendo takes an opposite approach. The shop owner hurts for money and is always mentioning it, so the transition to real money purchases is a smooth progression. Also interesting is the fact that, when you reach a high score, you sometimes get a new uniform for free. This is unlike many other freemium games that make serious efforts to sell purely cosmetic items. Even the simple touch of the game's BGM continuing during the purchase process helps keep the suspension of disbelief alive.

All mini-games are for a fictional game system, Hontendo 4DS, which your avatar jumps into to play games. When you end the mini-game, your avatar jumps out of the system and discounted items pop out alongside him. This nicely represents what is going here. Playing mini-games gives you discount items. This scheme seems to work very well making Torazi, players, and Nintendo happy.