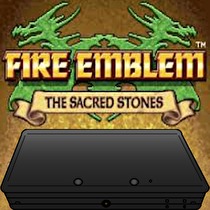 With the release of Fire Emblem Awakening still fresh, I thought I’d share something. Though I have played far more games than any sane person would be comfortable with, I’ve never played Fire Emblem. Any of them.

The first I heard of its existence was back in good ol’ Super Smash Bros. Melee when I unlocked Marth and Roy, to my utter confusion. Where are their powers? They have a sword, and they… swordfight. OK, so do I (modern fencing, that is). Moving on… hello Falco!

(I always play as Falco, don’t know why…)

Anywho, last month I heard a new Fire Emblem was coming out. “What is that?” I asked my friends, and they laughed in my face. The end.

So yesterday I decided to try out this so-called super-awesome amazing series once and for all by playing… the free one on my 3DS, because right now I’m cheap like that. To be honest, I didn’t even realize I had a Fire Emblem game on my 3DS from the Ambassador Program until two weeks ago. Yes, I know, start yelling now. Apparently I just glazed over the games I hadn’t heard of and promptly forgot anything else existed once I got my hands on a new Pokémon game.

It’s been one day of playing Fire Emblem: The Sacred Stones now, and I’m on Chapter 5: The Empire’s Reach. So, I’ve decided to look back on my experience so far.

First off, the main character is a girl? Whoa, I’m a girl too! This game just got way more interesting. Instead of running and cowering in fear, Eirika is able to fight enemies just like her paladin protector, Seth. This is so cool! She has a sword, I have a sword. She uses hers to fight for the honor of her fallen kingdom and find her brother, and I… wear copious amounts of protection and hit other people in hopes that a buzzer will go off and I’ll get a point. Hmm, OK, not as impressive, but still, it’s a girl! I promptly try to kill as many people with her as I can, especially the bosses. She rocks. So do Vanessa and Lute. I’m not biased, I swear.

Secondly, this setup is pretty amazing. When the instructions first started, and went on, and on, I was getting pretty frustrated. Just how many things did I need to know? Kill the guys in red, end of story, right? Nope, apparently there is a weapon triangle, neutral characters, villages, special movements, and special attacks. Walls crack, characters have support conversations, story elements are crucial when I decide who should talk to someone new, etc. Holy cow there is a lot—so much, in fact, that there is a permanent guide link on the menu. I really thought this was going to be the end of the game for me, that I was going to be bored out of my mind and never pick up the game again. Amazingly, though, I had work I wanted to procrastinate from. So I stuck with it, and I am insanely glad I did. All these elements work great together! This is like a far more entertaining version of chess! (OK, that sounded way less lame in my head.) I found myself eagerly looking forward to the next map so I could scope out my plan, strategically placing my allies in the best spot for them to strike the enemy, slowly closing in on their overconfident leader. I can’t believe how much fun I’m having with this power. For these past few chapters, I’ve felt god-like, ordering around my tiny minions and sending anyone with the audacity to wear red to their inescapable grave.

Which leads me to my third, and last, discovery.

People die?? Like, straight up die and never come back? I was not prepared for that! Let’s backtrack a little to Chapter 4: Ancient Horrors. Apparently, hell has decided this war has provided the perfect opportunity for everyone to catch some sun and party up on Earth. OK, I can dig it. Enter Artur and Lute, my first introduction to magical people, or people with magic. Whatever, I’m jealous; it’s Harry Potter all over again. Lute, I will admit, is cute. He has perfect wavy red hair and wears an outfit I once saw in a Bollywood film. Predictably, I am absolutely psyched when he joins my team after demonstrating his insane light magic by blowing up a gigantic floating eyeball.

Finally, the introductions end, the enemies line up, and the battle is on! I chose Artur first because his light magic explodes people and he’s awesome. First encounter: scary zombie thing. Bam! Obliterated, ha! I moved everyone else with equal expertise (I’m so obviously a Fire Emblem prodigy) and then it’s the enemy’s turn to wet themselves—they’ve seen the might that is my army. First a skeleton challenges Artur; boom, dead. Then another skeleton challenges… Artur. Dang, maybe I shouldn’t have moved him so close to the other monsters. OK, now a zombie is battling him and he’s not taking it too well.

It suddenly hits me: what happens when they die? Stab! Artur’s health empties. “The rest… is up to you.” What?!? The game fades back to the map and Artur is nowhere to be found. No body to resurrect. Nothing. What the hell??

Wait, what? Where’s Artur? Why is everything just as I—oh my god it auto saved! What kind of sick game kills off characters for good and then auto saves just to make sure I can’t play god? I’m speechless. OK, not true: I immediately yell and rant from the couch just so my whole house and neighborhood can know the injustice that has just befallen me. My boyfriend continues to work; apparently he’s never heard of Fire Emblem either.

I finished the chapter without ending anyone else’s life prematurely, but I felt a little empty inside. This was Artur’s battle, afterall. When I first arrived in this area, Artur risked his life to warn my company of the undead menace lurking ahead. I learned about hiding in the forest from him! So noble and caring, it was he who was tasked with the dangerous mission of protecting the townsfolk, a mission he took with no thought to his own safety!

OK, I’ll admit I might be reading too much into this, but I am seriously considering restarting the game. It’s only five chapters, and another day of my life. It’s a tough call, actually. So here’s my question: should I restart the game, or just get over it? Maybe this happens all the time, and this game is teaching me life lessons here. What do you think?

I don't know how you did it, but you managed to express hyperventilation through text without describing it.

Does it really auto save? I played through this for retroactive and I seem to recall turning it off and replaying certain chapters because I lost a specific character. I might be thinking of Radiant Dawn though, because I've played that within the last year as well.

It does auto-save after each character moves/attacks, but you can always choose the Restart Chapter option if you want to "revive" a character that has died.


Of course, if you saved after completing the chapter and didn't keep a backup save file... well, in that case the character is really and truly gone.

You'll probably be happier once you get Awakening.
You get to make YOUR OWN GIRL.

If you're finding Sacred Stones hard, you'll piss your pants over the other ones.

And by that model, FE5 will likely cause you kidney failure.

I feel like an old man watching my grandkid discover stuff in my backyard. "I remember my first death, yessiree bob. Don't touch that, Kim. It's diseased."