What remains is two GameCube games, a Nintendo 64 game, and a Wii U game. Cheers if you predicted it. 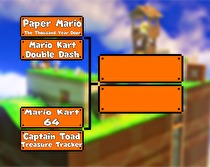 Another round, another culling. We are now down to four games. Let's go over how they all got here.

So, who you got? Will a Mario Kart game win out? Can Paper Mario live again? Will Captain Toad complete the surprising run? Vote now!

The Final Four is set! What game will win Mario Spinoff Madness?!?
Will it be Paper Mario: The Thousand-Year Door? Mario Kart: Double Dash? Mario Kart 64? Captain Toad? Vote now in this thread! The polls close late on 4/24! pic.twitter.com/6kdCIFzoB9