We halved our game total in one fell swoop. See what upsets happened, what series have the most left, and what trends can be drawn from Mario spinoff voting. 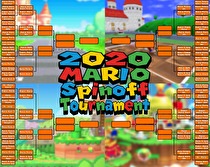 Round one is in the books. 64 games entered, and 32 left. Note to self: putting up 32 polls on Twitter sucks. The first round was mostly chalk, but a few upsets shined a light on a trend that is interesting. If you want to cut to the chase, the updated brackets are attached and the votes for round two are below. But for now: stats!

It's time for round 2 of the Mario Spinoff Madness Tournament. Vote for all of the remaining match-ups in this thread. https://t.co/zPnnyaArCF pic.twitter.com/pfdm9TG6YB