A pair of top seeds fall and the competition gets fierce. 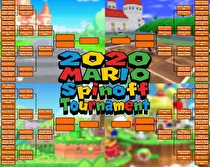 16 more Mario spinoffs were voted off the island, and now we're down to just 16 games. Two top seeds (Mario Kart Super Circuit and Mario Tennis 64) were knocked out by Super Mario Strikers and Mario Party 2. Every second and third seed is still alive, and the seismic activity from Paper Mario: The Thousand-Year Door and Mario Kart 8 might knock the Earth off its axis.

Vote below, and enjoy the factoids.

Our Mario Spinoff Madness Tournament is done to 16 games! Vote to see who goes on to our Spinoff Elite Eight! Voting is in this thread and ends late on 4/20! https://t.co/Ge0stgPTJl pic.twitter.com/uU9mUSBGCG

Elite Eight Round of 32