Titans fall and we set the stage for a Kart and RPG final battle (maybe with a Captain's interference?). 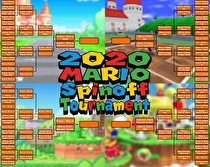 While the match-ups were settled coming into the final hours of voting, things got wild for a minute there as we had three tight duels between RPGs and Karts. With that, one of the presumptive favorites (Mario Kart 8) is eliminated, setting the stage for one guaranteed RPG in the final four, with the likes of Mario Kart 64, DS, and Double Dash trying to avenge their fallen brother. It's also time to reveal the behind-the-scenes staff predictions, of which we have one staffers who picked all eight of the remaining games!

Vote below, and enjoy the factoids.

Here we go! We're down to eight games to determine the winner of our Mario Spinoff Madness Tournament! Vote now in this thread! Polls close the night of 4/22! https://t.co/DtfnnmafKq pic.twitter.com/FfEPniGiqX