I honestly didn't think it was possible, but it's actually happening. The big game of the week is Xenoblade Chronicles 2, the last first party retail class title on Switch for the first insane calendar year for the console. If you haven't read John's review yet or checked out the video, he kinda liked it.

An unsurprising but welcome announcement.

Although Tokyo is going to get wrecked again in the Shin Megami Tensei universe, the world will witness the destruction.

Nintendo and Atlus posted a new trailer for the title today which confirmed the game would release outside Japan. No release timeframe was given, and Atlus is still reporting "TBD", nor do we know if there will be a delay between Japan's release and the rest of the world.

Like Mario and Pat Boone before him, Spring Man went metal.

ARMS's newest update has put a new twist on an existing character.

Version 4.1 has added the metallic Springtron to the character lineup. The robotic version of Spring Man will utilize the same initial arms as its carbon based counterpart, while also gaining access to the other ARMS Spring Man gets.

With the telethon days away, the NWR staff is taking to streaming to get the festivities started early. UPDATE: new stream added!

If you haven't heard, this Saturday is Nintendo World Report's annual telethon in support of Child's Play Charity. It's a big deal for us. In fact, we've decided to start our just a little bit early with four nights of live streaming. Starting Tuesday, and running through Friday, we'll be doing live streams to get word out for Saturday, and to start getting some donations early.

Yooka-Laylee Takes Off On December 14 Switch 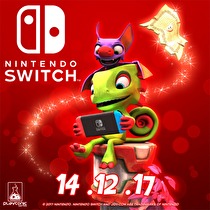 After some additional tweaking, Yooka-Laylee will land on Switch in a couple of weeks.

The tribute to N64 platformers will release on Switch on December 14, with a preload available on the 7th. The Switch version will include all of the tweaks made to the game since its launch on the PlayStation 4 and Xbox One including camera tweaks, modified controls and additional music options.

The Switch game onslaught doesn't even take the holidays off, it seems.

Another week, another sixteen games for the Switch for your eShopping pleasure. The bigger games of the bunch are still indie - no Bethesda/2K/Nintendo this week. The ones that have my personal attention are Superbeat: XONiC, which I've been playing for a review, and Adult Swim Games's debut on the Switch, Battle Chef Brigade which we loved this week.

Nintendo has announced today some major additions coming to Splatoon 2 on the Nintendo Switch. In a free update that will be available on November 23 the following will be added:

Four New Battle Stages: The first new stage will be MakoMart, a giant superstore-style stage that will fittingly be... Read more...

Put down the petitions folks, this one WILL happen in the West.

The Valkyria Chronicles series of strategy RPGs will make its full Nintendo debut next year on Switch.

Sega has announced that Valkyria Chronicles 4 will launch worldwide on the Switch in 2018, as well as on PlayStation 4 and Xbox One outside Japan. No specific release dates has been nailed down outside Japan, but the Switch version will launch in Japan in summer 2018.

No longer will Australia have all the fun.

NIntendo has announced that Animal Crossing: Pocket Camp will release worldwide this Wednesday (November 22). The free-to-start title has been available in Australia since the game was unveiled last month.

The sales charts are doing the Odyssey.

The Switch has had another banner month of sales.

The October US sales survey for the video game industry is out, and Nintendo had the two best selling units of hardware in the country in October with the Switch and the SNES Classic Mini. Combined with 3DS family sales, Nintendo reported more than 667,000 units of hardware were sold in the US in October as the game industry crossed the million mark for the first October since 2011.

There's a dragon capable of destroying everything in sight, and I don't think Dovakhim can stop Garchomp.

It's 3rd Party Week on Switch, with more games out on store shelves this week alone than were on the system at launch. There's the epic adventure of The Elder Scrolls V: Skyrim, the gritty crime drama of L. A. Noire and the Batman, and some more Lego for your perusal. The "indies on card" crowd is also well represented with Ittle Dew 2+ and RIME. But the biggest sellers of the week are in the multiplayer realm.

The Switch has gotten a mess of updates in addition to a packed new release schedule this week.

by Adam Abou-Nasr - 10:30 am EST
Discuss in talkback! Source: Atlus

A new trailer, too.

Radiant Historia: Perfect Chronology for 3DS will launch in North America on Feb. 13 and Europe on Feb. 16, Atlus announced today.

Launch copies will come with an art book and decals in North America and an in-case art book in Europe.

Including a fancy "Multiverse Edition."

Axiom Verge for Switch is getting two physical editions in North America on November 21.

The Multiverse Edition goes for US$39.99/C$54.99 and includes a 5-hour documentary Blu-ray, an art book, a poster and a soundtrack CD.

The standard edition goes for US$29.99. Information for the Wii U edition is coming later.

Adult Swim Games will be cooking up a storm on the Switch in a couple of weeks.

Battle Chef Brigade, the action game that combines eleements of competitive cooking, brawlers, and match-3 puzzle games, will be served up on November 20 for Switch. The US price for the game will be $19.99.

One of your streaming apps down.

The Switch has its first North American streaming service.

The streaming service Hulu is now available to download in the Switch eShop in North America. A co-operative service of the major United States broadcast networks, a subscription is required to fully enjoy the programming of the over 50 networks on the service.

Free Update For Fire Emblem Warriors Due Next Week Switch3DS

Armor piercing and other quality of life improvements are reinforcing the musou.

The paid DLC will come in December, but free updates to Fire Emblem Warriors will begin next week.

Coming to both the New 3DS and Switch next Thursday (November 16), the update will add a new weapon attribute that breaks armor and other in-battle Blessings. The ability to sell multiple weapons at once is also incoming.

Penguins Go To War On Switch Next Year Switch

In fairness, they've been at it for a while.

Among the wars being waged on the Switch, there will soon be penguins.

Dispatch Games has announced a remake of the 1985 game Penguin Wars will launch on Switch early next year. The base game features penguins flinging balls in combat, though an ingame story mode will allow for buffing of your chosen birds.

Three hundred bucks in retail Switch games and yet I just want to buy LORDS OF THUNDER.

Circumstances have conspired to bring us a new section of the report this week, as the "Switch Preloads" heading will come up now for games that come up with the 4.0 feature but aren't out this week. And the lineup is thick with those kind of games this week with the LA Noire port, LEGO Marvel Super... Read more...

Other regions and the 3DS version are not affected. UPDATE: Resolved 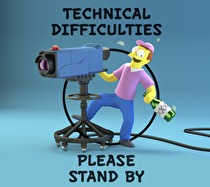 UPDATE: The update released at 2 a.m. Eastern time, standard update time for the game. No compensation has been announced. Original story follows.

Pokémon Shuffle's traditional Tuesday update has gone a bit sideways for mobile players in the West.

The bi-weekly data update has not generated... Read more...

Switch Reminiscence in the Night Oct 22