Everything old is new again in this magnificent Mario title....

Nintendo fans, old and new, can all unite behind this fantastic entry in the Mario series....

HANDS-ON: This game may have a similar art style to the DS game, but it uses the Wii hardware to good effect....

HANDS-ON: We have hands-on impressions of Mario's four-player foray to 2D gameplay on the Wii....


NWR 15th Birthday: The Best Game of the Past 15 Years: Round 1 - Mushroom Kingdom Region Part 2

This region's top games are older, with Advance Wars and Prince of Persia leading the field....

Combine the style of 3D Land with the multiplayer of New Super Mario Bros. and then dream for the exploration of Galaxy....

This week is completely dedicated to newly released Mario toys....

These capsule toys give Kinder Surprise a run for their money....

Despite two official reviews, NWR staffers still have a hard time agreeing on whether the game is great fun, disappointing, or both....

The eternal darkness has finally subsided. ...


Getting to Know Your New Super Mario Bros. 2 Directors

Who are these young dudes making our new Mario game?...


Mario Does Not Wear Suits; He Transforms

According to Nintendo, Mario transforms into his outfits, he doesn't wear them....


Gotta Find 'em All: The Evolution of the Nintendo Platformer

Just where did all those bananas come from?...


BLOG: When Nintendo and the Wii Invade Commercials


BLOG: Video Footage Showing the Return of a Koopa Kid

Mario's return to 2D platforming on a home console lands on our Top 10....

The RFN crew talks about hopes and expectations for the Wii U launch details....


NEWSCAST: Episode 62: What Have Wii Done for Me Lately?

The bad puns never stop as the Newscast strolls down memor-Wii lane....

When I think about you, I teach myself....

Are we approaching Mario fatigue? ... 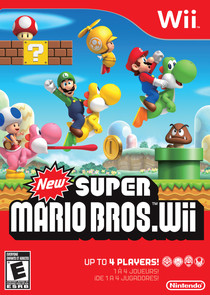