Iwata - So Inuzuka-san, you’ve been working with Horii-san for 20 years now, but I’m wondering how you first met?

Inuzuka - That’s a rather simple story. I had entered Enix (※11) as a new graduate, and was assigned to the “Dragon Quest” department. So when it came time to go to meetings, Horii-san was there.

※11 Enix＝ Established in 1975. Released titles such as the “Dragon Quest” series of games, and merged with Square in 2003 to form what’s currently known as Square-Enix.

Iwata - That is incredibly simple (laughs). Why did you decide to enter Enix?

Inuzuka - Enix was the only company with an interesting introduction. It didn’t take itself too seriously, with things like “Level 1 Slime” written in it (laughs). That’s what piqued my interest and made me decide to apply. Plus I loved “Dragon Quest.”

Iwata - Of course, playing games as a player and making games are completely different things. 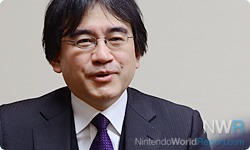 Iwata - What were your feelings standing on the development side and watching that “Dragon Quest” that you loved so much as it went through the process of getting made?

Inuzuka - Well… More than “that ‘Dragon Quest’ that I loved so much,” it was seeing Horii-san, Sugiyama-sensei (※12), Toriyama-sensei, the programmers (Manabu) Yamana-san (※13) and (Kouichi) Nakamura-san (※14)…Getting to actually meet them all and talk with them, that amazing talent they all had almost became tangible. That’s how I personally felt back then, anyhow.

※12 Sugiyama-sensei＝ Kouichi Sugiyama, the composer. Has written hit songs such as “Towhead Maiden” and “Fugue of Love.” He has also handled the music for all of the titles in the “Dragon Quest” series. He has appeared in the previous Iwata Asks for “Dragon Quest IX.”

※13 Manabu Yamana-san＝ Has been involved in the “Dragon Quest” series as a programmer. Currently the representative of “Genius Sonority.” Other main works include “Pokemon Typing DS” and “The Denpa Men RPG.” He has appeared in the previous Iwata Asks for “Pokemon Typing DS.”

※14 Kouichi Nakamura-san＝ Involved in the “Dragon Quest” series up through “Dragon Quest IV” as a programmer. Currently the CEO of Spike Chunsoft. Main works include “Torneko’s Adventure” and “Mystery Dungeon: Shiren the Wanderer.”

Iwata - Did it feel like that talent was some kind of aura burning bright?

Inuzuka - It did. That’s why it was so much fun just getting to be a part of that, and from a rather early stage I felt that “As long as I get to work helping these people, I’ll always be happy.”

Iwata - As a worker that is a really happy thing to have.

Inuzuka - I think so.

Horii - But you know, he’s actually been through some tough times. Back then you worked on the Super Famicom port of “I & II” (※15), right?

Inuzuka - Yes, that was about my second year in the company.

Horii - When he joined he was quite the looker, and even though he looks like this now, back then he resembled the actor Atsuro Watabe (laughs).

Iwata - “Even though he looks like this now.” (laughs)

Horii - But when making “I & II” we got holed up finishing it for a couple months. And then when development finished, he came in one day and was bald - I thought “WHAT?!” Ha ha ha (laughs). 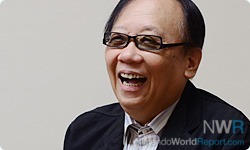 Inuzuka - But it was fun (laughs).

Iwata - So did he transform into this as the result of all the agony?

Horii - Right, it was this kind of transformation (laughs). And he’s a serious gamer, having played a ton of “Pokemon.”

Inuzuka - Yes. I have all of the Pokemon in my Pokemon Center.

※16 “Black/White”＝”Pokemon Black” and “Pokemon White.” RPG released for the Nintendo DS in September 2010. Includes over 640 different breeds of Pokemon including the original set of 151 from “Pokemon Red/Blue” (released in February 1996).

Horii - He loves to raise them and collect them.

Inuzuka - Yeaaaah (laughs). That’s why even among our company’s titles I play “Monsters” the most. But Horii-san just breezes through, don’t you.

Iwata - Everyone plays those games in completely different ways, don’t they? There are people who won’t feel satisfied until they’ve filled up all of the spots of Pokemon to collect, and there are also people who are the happiest when they can just see the end of the game.

Horii - I’m all about efficiency. Like, just how fast, easy and logically can I beat this game?

Inuzuka - That’s why you’re pretty knowledgeable about which monsters are the best to use in the middle of the game.

Iwata - What was the reaction to the first “Terry’s Wonderland” when it was released?

Inuzuka - At first it wasn’t received well at all. But starting from about the month after release, we had preliminaries for a national competition between players at stores around the country, and starting with that player reactions began to improve more and more. 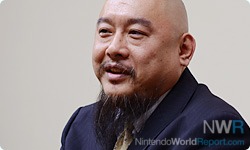 Iwata - So more and more people began to understand its appeal?

Horii - Clearly it’s just fun to battle against other people. In the end it sold over two million copies, which made me think “that power of battle is really something.”

Iwata - And how did you come up with the monster designs, their personalities and settings for “Monsters?” Even though the monsters appear in the mainline series I feel like they’re represented in a more comprehensive way here.

Inuzuka - In order to achieve that representation we’ve created monsters original to this series as well. For the mainline games Horii-san first draws storyboards, and the monsters are constructed from there. We then take those we think would be good from there, re-construct them, and fill in the holes with new monsters.

Inuzuka - Yes. Including the mainline titles, and the spinoffs like “Swords” (※17) and “Torneko” we have over 1,600 monsters - so it’s really “all you can play.”

Iwata - That’s an incredibly fleshed out library. I’m wondering if you ever have any debates about things like whether or not it’s ok to put the last bosses from previous mainline games in “Monsters” though?

Inuzuka - Originally Horii-san was kind of against it, weren’t you?

Horii - Yes. But it was strongly requested from the dev team, and since it’s kind of a party title - a celebration of Dragon Quest - I thought, “What the heck?” It’s kind of like…a free service in a way.