Nintendo is hoping to increase their brand awareness by spreading their beloved characters to new places.

“In order to flexibly deal with the developments of the Internet and social media as well as the changes in the people’s lifestyles, we will start strategic endeavors so that Nintendo can maximize the value of our IP that we have used primarily for our own dedicated game platforms.” – Iwata (March 2015)

For over a year now, Nintendo President Satoru Iwata has been discussing how he wishes to further take advantage of one of Nintendo’s biggest assets: their vast portfolio of recognizable characters and worlds. Iwata seems to want to do this in order to spread brand awareness and to raise interest in Nintendo’s products.

As far as the short term goes, I think Amiibo has, to some degree, helped to achieve this goal. While only a start, Nintendo’s NFC figures have gotten Nintendo’s famous characters to sit right next to popular Disney characters on store shelves around the world.

The effectiveness of Amiibo works both ways too. Nintendo fans who already own Nintendo hardware may buy Amiibo to use in their games. There are also people out there who buy Amiibo because they like Nintendo characters, but don’t currently own Nintendo’s latest hardware. There is a strong possibility that they buy an Amiibo because they enjoy that particular character, and then later decide to get Nintendo hardware because they have that constant reminder sitting around that they have a toy that is compatible with some software they may be interested in. Either way, it’s a win for Nintendo.

Amiibo is only the tip of the iceberg for Nintendo when it comes to spreading their franchises. 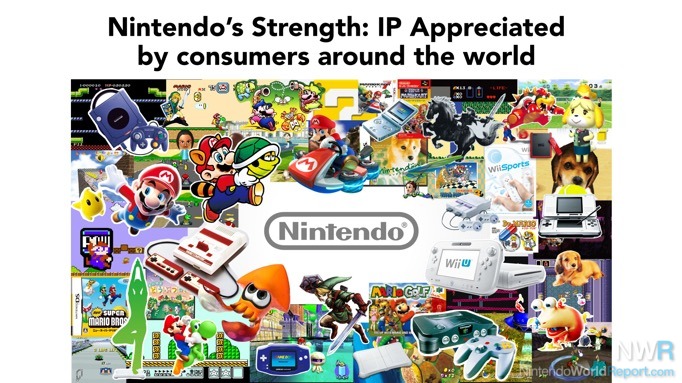 “…we are making progress in our efforts to maximize the value of Nintendo IP for our consumers via a variety of different communication methods, including licensing our IP to visual content and a range of other character merchandising products.” – Iwata (March 2015)

Based on Iwata’s comment above, it really does look like Nintendo is looking to help spread their brand awareness by having some of their characters possibly appear in movies and TV shows. Maybe the Pikmin animated shorts last year were a test of such an idea. Iwata also reiterates here that he would like to have more licensed character merchandise. This confuses me slightly since there is already a ton of it out there (trust me).

Also, who knows, maybe that long rumored Nintendo theme park could come about as part of this initiative.

Other comments lead me to believe that Iwata is also very careful about how Nintendo’s characters will be utilized. He is open to all sorts of ideas, but is also cautious.

“Also, we will be flexible about forming licensing relationships in areas we did not license in the past, such as digital fields, provided we are not in direct competition and we can form win-win relationships.” – Iwata (Jan. 2014)

In the end, this new push to increase brand awareness through the utilization of their world-famous characters seems to be the right way to go, especially if they are successful in helping to drive people to their core business model. Increasing brand awareness in an effort to do so is one of the reasons they are bringing their characters to mobile devices, but more on that a little later.

I enjoyed the speculation on the NX platform. While others were thinking whether it would be one hybrid device or two devices, few would have guessed a digital platform that could support three or more dedicated video game consoles.

Well researched & thought out article. Most detailed analysis I've read.  Could this be a cloud based platform viz a vi what's been announced by competitors? Pushing out content to multiple devices. Maybe a set top box connecting a handheld to the tv?


Do you envision any attempt by N to get into the VR space?


I think what you said is what's going to happen.  Tbh as a physical medium advocate, I feared this day would come.  It's inevitable, I know, to go down this route.  As long as this keeps them strong, I guess that's the way to go.  So yes, conclusion is they're most likely going down the IOS and Android route.  One platform for all, different devices to play on using the one account.  The better the hardware, the better the experience, obviously.  And this is why, imo, the Wii U isn't dead.

I"m with TLZ.  I have a feeling they are going to start releasing yearly or bi-annual hardware that gets obsoleted every 4-5 years or so.  So each game that is created is scaled to whatever hardware is being run, just like how iOS platforms are configured.

I'm not sure how I feel about that, but if the entry price for the new hardware is not too expensive, I could get used to it.

I"m with TLZ.  I have a feeling they are going to start releasing yearly or bi-annual hardware that gets obsoleted every 4-5 years or so.  So each game that is created is scaled to whatever hardware is being run, just like how iOS platforms are configured.

I'm not sure how I feel about that, but if the entry price for the new hardware is not too expensive, I could get used to it.

If they do that why are we bothering with a dedicated videogame system?  I have to deal with that kind of crap with computers and phones and I already own those things for non-gaming reasons.  If hardware updates every year then I'll just become a PC gamer.  I already own a PC and will always own one so I have to play catch-up with hardware all the time I might as well do it there.  The whole selling point of dedicated videogame systems - the whole reason they have ever been successful at all - is that you buy it once and every game works the same on it for the next five years or so.  If you remove that then a console is just a restrictive PC and a handheld is just a restrictive mobile device.

In the age of smartphones the future sustainability of dedicated videogame systems relies on them being an alternative to phones - for a gamer that wants something more tailored specifically for videogames.  Making game systems MORE like phones makes no sense.  They need to be different to justify their separate existence.

Phenomenal read. Almost sounds like the author dug through garbage to find these Iwata quotes from way back. Good job.

Great article.  I totally agree with NX basically being an OS/archtecture.  To me this is a really good thing.  We should be able to upgrade our Nintendo device but be able to seamlessly keep playing our games with our current save data on them.  I don't think this will mean that Nintendo will release replacement hardware every 1-2 years.  Nintendo makes games that are meant to last for years and years, unlike Call of Duty and most current developers where they actually want you to stop playing after 1 year.  Nintendo's games age well.  I feel that Ice Climbers is more highly regarded now than when it was originally released.  Nintendo knows that playing their backlog is a huge strength and having the NX be an OS/architecture will allow consumers to experience a great many games day one of new hardware releases.  Nintendo thinks in the 5 year and longer span when they design games; they don't want their games to feel old after just a few years, instead they want them to feel like classics and keep their charm.  Nintendo won't need to upgrade their hardware every 1-2 years because they don't ride the hype bubble like other developers.  A similar 5 year window should still do Nintendo fine.


However, we might see them launch more varieties of hardware with a staggered release every year: small handheld (phone like / DS), large handheld (tablet like), small home console (Wii like), large home console (PS4 like).  Buy the system that meets your current gaming needs and you should still have access to a large number of excellent games that were made on the NX platform.  This will also allow Nintendo to compete against iOS, Android, and other gaming systems with strength.

However, we might see them launch more varieties of hardware with a staggered release every year: small handheld (phone like / DS), large handheld (tablet like), small home console (Wii like), large home console (PS4 like).  Buy the system that meets your current gaming needs and you should still have access to a large number of excellent games that were made on the NX platform.  This will also allow Nintendo to compete against iOS, Android, and other gaming systems with strength.

Four platforms?  That would certainly surprise me if Nintendo did that!  So I guess the idea is that they make one game and it scales down depending on the platform?

I'm concerned that such an idea would result in games being designed primarily for the lowest-hardware with only superficial improvements for the "enhanced" versions.  New hardware doesn't just make for prettier graphics.  You can have larger areas, improved AI, improved physics, more items on screen at once.  Those things affect gameplay so you can't just remove them from the lesser hardware and expect it all to work right.  The new SSB doesn't have Ice Climbers because Nintendo admitted they had issues with making them work on the 3DS.  Considering they could work on the Gamecube they clearly could work on the Wii U but because of the limitations of the 3DS the game on the superior hardware was compromised.  An NX game that works on all platforms is effectively a handheld game, unless you make multiple different games which goes against the whole point of the idea.  You could cut loose on a console game but then make it exclusive.

Depending on what course of action Nintendo takes that could also make certain platforms appear to lack value.  Let's assume it's just a console and handheld to keep it simple.  So Nintendo makes every game with the handheld primarily in mind so the console just gives you prettier versions of the same game.  That's not useless but it isn't THAT great of a selling point.  Okay, so let's assume Nintendo makes console exclusives that really push the hardware and cannot be scaled down?  Well then the handheld has less value because it's basically the exact same games but less and relies entirely on the portable nature to give it value.  Neither option is completely worthless and if all the saves and such are shared between all the devices it is very cool for someone that owns both.  But I think less people will own both than they do now where they might do so entirely go play the Nintendo exclusives on each platform.  One of the two platforms will be the fringe product.  They won't be able to give each one enough value to expect both to be popular, like the DS and Wii were.

My fear is that Nintendo would go with the handheld as their base platform and their console games will feel "small" but with good graphics.

I have scoured the web and this is by far the most insightful analysys I've read on Nintendo's future, Well worthy of clicking through. I believe congratulations is in place.