Nintendo's upcoming symphony orchestra will include a fan favorite and a medley. 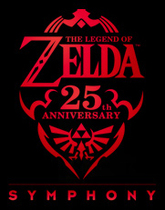 The first song announced is fan favorite Gerudo Valley from Ocarina of Time. Yokota noted, "This was a really popular choice from the surveys. I'm really looking forward to how this passionate, rhythmical song is going to sound coming from a live orchestra."

The second arrangement will be a medley of boss battle music from multiple games in the Zelda series. Yokota explained, "We got a lot of requests saying, 'I want to hear XXX's boss battle theme!' There are many different colors and variations regarding what series and boss corresponds to the XXX. It's even hard for us to sit down and try to decide which boss battle song would be the best to play. That being the case, we've decided to arrange several of them into a medley.We hope you look forward to finding out which ones once the concert begins!"

Three international performances are currently scheduled, with more to follow. The first is October 10 in Tokyo, followed by performances on October 21 in Los Angeles and October 25 in London.