Guys, you know I like me some fanservice-heavy anime girl video games. I haven’t played a good one in awhile, though, and Senran Kagura: Peach Ball barely counts. I was hoping that this little number, Azur Lane: Crosswave would fill my quota, but alas, ‘twas not to be. I’ll just have to wait until Pyra & Mythra hit Super Smash Bros. Ultimate next month. As for Azur Lane, the concept is a bit of a mystery to me, but there’s just not much in the way of actual gameplay.

The Azur Lane franchise is kind of a strange beast: it takes real-world naval vessels from around the globe and reimagines them as…“Shipgirls.” While the original Chinese mobile game apparently used the Boatbroads to teach World War II history, Crosswave has its own story which imagines the Dinghydames inhabiting their own world, being attacked by alien Lifeboatlassies called “Sirens.” The Terran Catamarancougars (okay, I'll stop) are divided among four nations based on the United States, Britain, Japan, and Germany. They’re all named after real world naval ships which, if nothing else, has taken me down an incredibly interesting Wikipedia rabbit hole as I both learn about these vessels and struggle to understand why the associated Shipgirls look nothing like their real-world counterparts.

There’s probably more to the story, which is a shame because I cannot be bothered to sit and read through all of it. Azur Lane: Crosswave is 75% visual novel, 10% menu navigation, and 15% actual gameplay. I will occasionally groan at how chatty the Senran Kagura games get, but they’ve got nothing on the extended conversations between multiple characters in any given Crosswave sequence. The game really needed fewer characters and/or a more impactful storyline; I will admit that at a certain point, I just started fast-forwarding through the dialogue, pausing only to look at whatever new Shipgirls were introduced (there are a lot of them). 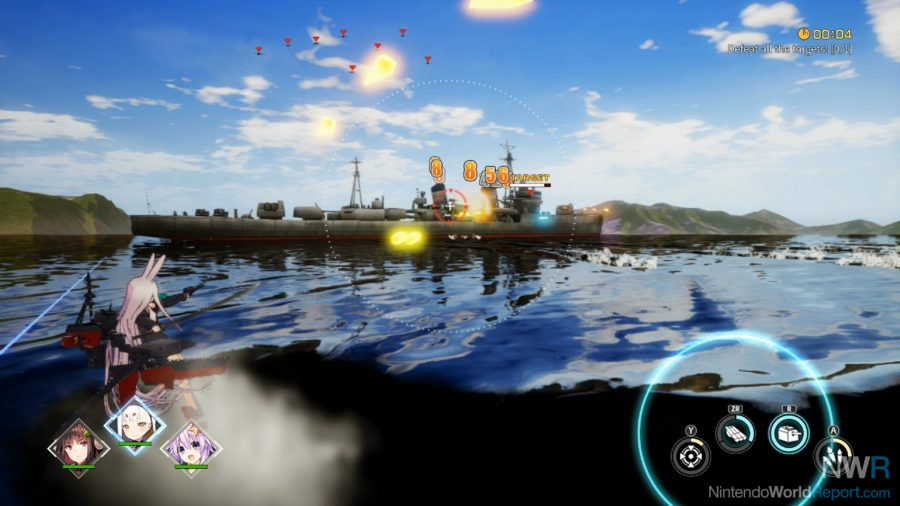 It’s a real shame that there’s so little gameplay, because the gameplay is actually pretty fun. You recruit a team of Shipgirls (the roster expands as you go) and arrange them into a “front” group, whom you control directly, and a “rear” group, who apply buffs. When a combat encounter starts, you control your three front ships as though you were playing a third-person action game, activating attacks as your weapon reload timers fill up, aiming at large background vessels (which are actual battleships), smaller attack boats, and aircraft. Different classes of Shipgirls (battle cruiser, aircraft carrier, etc.) have different weapons—some specialize in torpedoes, others on aircraft, and still others in fast, but low-damage guns. You’ll usually also encounter between one and three rival Shipgirls to take out.

However, most encounters last less than two minutes. In fact, you’ll get a better grade if you can win an encounter within 120 seconds—a goal that is never out of reach. Winning matches earns you points to spend on the recruitment of new Shipgirls and materials which you’ll use to improve your arsenal. You can also replay fights in order to grind for loot. By grinding, you can severely overpower your characters, which will make you wish there were more fights and that they lasted longer.

When you’re not listening to never-ending conversations or engaging in Shipgirl skirmishes, you’ll spend a lot of time navigating menus. You can spend zenni and blueprints on new weapons at a store or power up your existing weaponry using parts earned in fights. I found this process largely frictionless, although the game doesn’t always give you a good idea of what some of these items ARE. Weapon titles within the same class are often difficult to tell apart at a glance. I realized that if you’re going to swap your Shipgirls in and out of your front line roster, you’ll probably need multiple copies of most weapons so that you’re not constantly swapping equipment.. 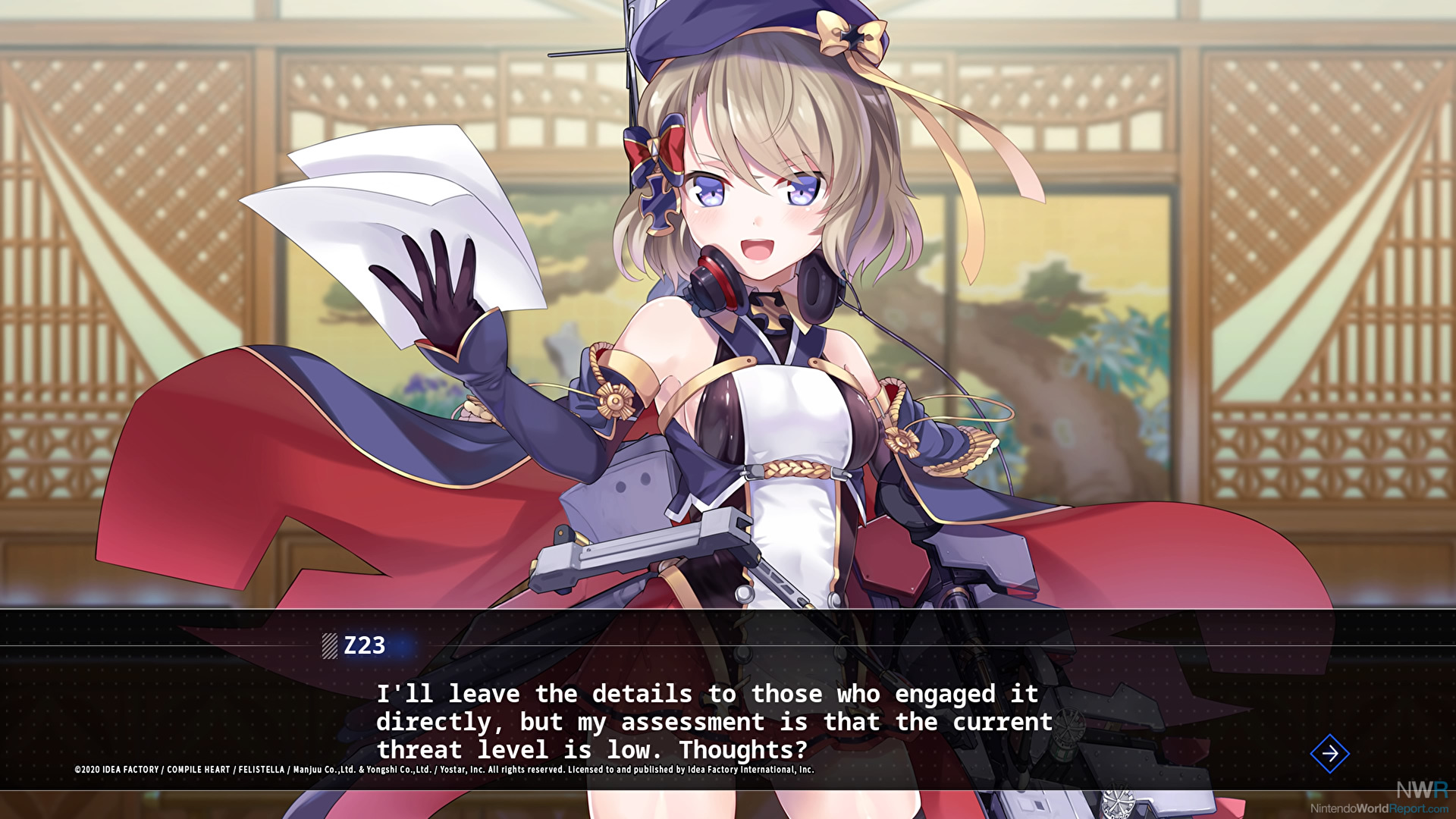 Crosswave, however, doesn’t exactly encourage you to utilize your full Shipgirl fleet. You can run the whole game with three Shipgirls who you like (although it helps if the three are of different classes). Shipgirls level up upon winning battles, but experience is given so readily that you can swap in a low-level Shipgirl and she’ll be on par with her higher-level peers in just a few fights. In between conversations, you can scroll around the “world map,” which changes between story chapters, to find containers full of materials, optional story sequences, and optional fights. And that’s the whole game, folks. It’d be nice if the Shipgirl fights were more visually interesting, but Crosswave looks a little too much like a mid-tier Playstation Vita game for my tastes. All of the dialogue is fully voiced...in Japanese, which is something (and also diagnostic of most Vita games).

On the other hand, Crosswave already features Neptune from the Neptunia franchise--and I have to assume that the other Goddesses will move in eventually. That’s probably not enough to keep me coming back, though. If you like anime-based visual novels, you might get something out of Azur Lane: Crosswave. For me, though? I like a little more “game” in my video games.

Yeah, the story is just insipid. It could be vaguely interesting if the aliens were more present but instead it's all some no stakes competition and constant character introductions. Also it stars the worst character design in the game, god damn Shimakaze is terrible.