This pinball game is fun, but extremely light on content.

I think I have to do these Review FAQs for every Senran Kagura game now since I did it for Reflexions.

Hey, weird voice in my head, I got a new game to review. Want to hear about it?

Sure, though I’m still going through Super Neptunia RPG.

Yeah it is. Very charming. But okay: what’cha playin’?

Oh god. I still have nightmares about that “little sister” crap in Reflexions.

So do I. Thankfully, Peach Ball is not nearly as creepy; it’s a pinball game, and I have a long history of enjoying video game pinball.

Well that’s good. So is it like Elvira and the Party Monsters and/or Elvira: Scared Stiff?*

Kind of. So there’s a paper-thin story about Haruka accidentally exposing five of the Senran girls (who, coincidentally, I’m sure, were already featured in Reflexions) to a potion that makes them transform into animals. In reality, this means they’re wearing animal-themed outfits. The only way to change them back is apparently to stick them inside a giant pinball machine and paddle them with balls while trying to score (please send help).

How long has THAT joke been bouncing around your head?

I actually just came up with it; pretty proud of myself.

You may have read Donald’s E3 preview of this game a few weeks ago. He was able to sample two tables, but what he didn’t know was that he actually sampled the entire game. There are only two tables in Peach Ball.

Yes, two tables. Oh, but you can pretend there are MORE tables because each of the two tables has different selectable lighting based on time of day or season.

That’s because it is.

You get three tables in a typical Pinball FX3 DLC pack, and those cost maybe $10.

Metroid Prime Pinball has seven tables (note: one is multiplayer-only).

Are they? Are they, though? 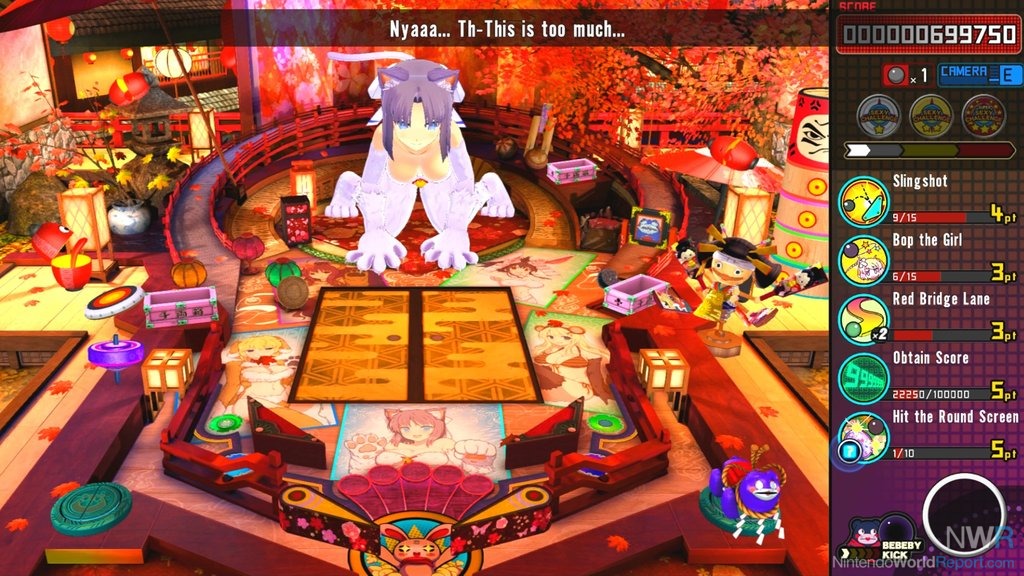 I mean, they are unusually proportioned tables which makes hitting certain targets surprisingly difficult and, like Donald, I also had a tough time finding an ideal camera angle. There’s no TATE mode, which I’m genuinely surprised at, especially because the game recommends playing with the Joy-Cons detached for, I guess, HD Rumble stuff. The two tables have similar layouts. The second table has way more to do, including a lot of “mini-tables” where you try to hit specific targets. However, its layout is the most confounding. Part of the problem is the gigantic girl sitting in the top-center of each table.

Isn’t she sort of the point?

Yeah, and it’s cute that she reacts to what’s going on around her, but she takes up a lot of real estate and, in my experience at least, kind of distracts from hitting the loops and targets you’re trying to hit. Bopping her with the ball is also not particularly score-boosting unless you’ve entered Fever Mode or Super Fever Mode or whatever other mode gets the lights flashing.

Are there pinball-style “missions?”

Yes. In Story Mode, you’re trying to get enough points to fill your “Peach Meter,” which I never really paid attention to. This triggers a “Sexy Challenge,” where you’re taken to a small table and asked to hit random-ass things with the ball, like rubber duckies or an ice-cream cart. Getting a high score there (which is hard not to accomplish) gets you closer to curing the girl. Your third Sexy Challenge is a “Super Sexy Challenge” (sigh) in which…you…

Come on, after Reflexions nothing can stun me anymore. 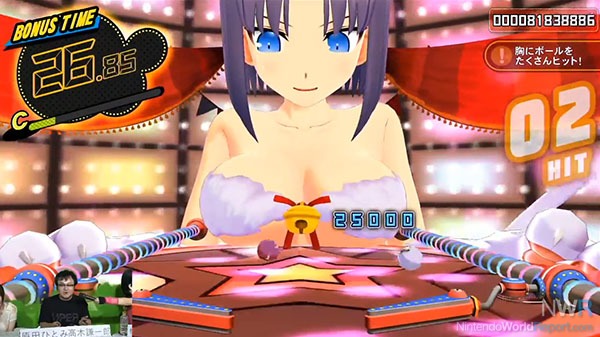 Good point. In the “Super Sexy Challenge,” your target is the girl’s bosom or posterior. And the more you bop them, the larger they get (closer to the flippers). And THEN you basically play a Reflexions game where you press the triggers in rhythm to multiply your score, and while this is happening, the Peach Ball is bouncing between the girl’s breasts or buns. After you do that for a while, the Peach Ball “cures” her by removing her animal clothes and she’s back to normal.

Then, assuming you’re still playing Story Mode, you move on to the next girl and repeat the whole process until all five are cured. This whole process takes roughly an hour.

Now, there is some incentive to replay Story Mode using all five characters: each time you go through the game, playing “as” somebody (I assume the one using the pinball machine), you unlock an image of them at the end, and that image is a puzzle piece of a larger, five-piece picture. Also, throughout Story Mode, you’re constantly unlocking Dressing Room accessories and things to buy from the in-game shop. Unfortunately, the earned-moolah-to-store-pricing ratio is extremely wonky, so expect to replay Story Mode a bunch just to buy some stuff. Or, you know, retain your sanity and just play freeplay mode.

I was going to ask if there was a freeplay mode.

Yep, and it’s the best way to learn the intricacies of both tables. 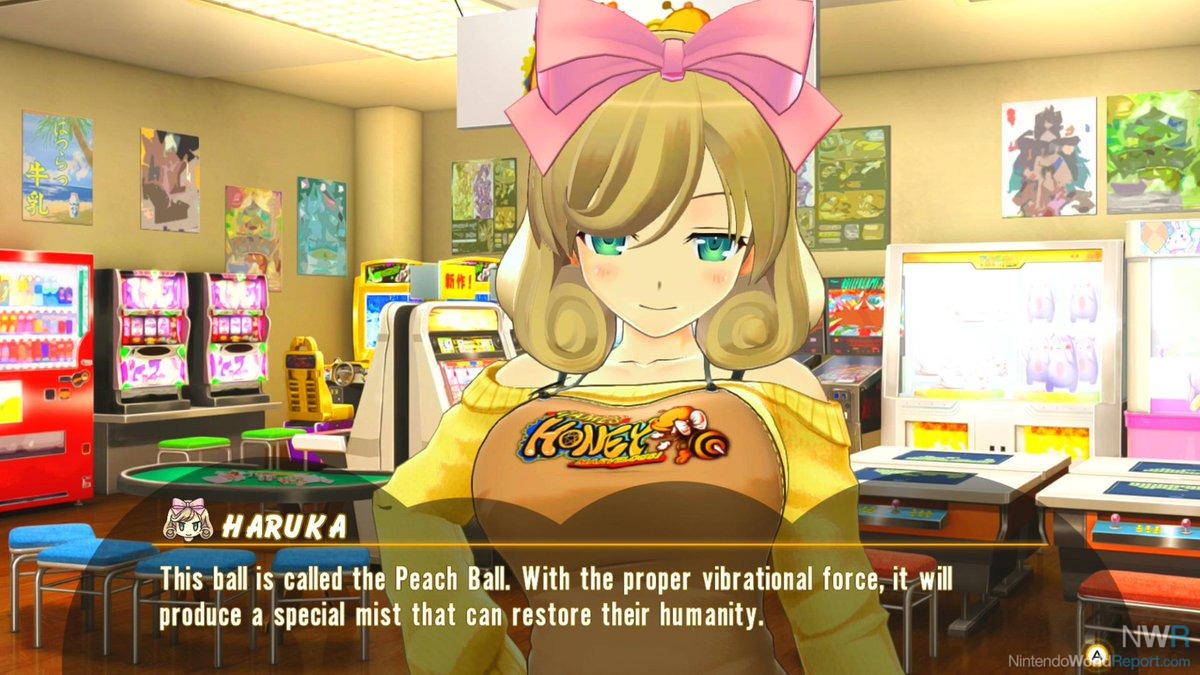 Because this seems to be running on the Reflexions engine, you also get a dressing room and Intimacy Mode, which is the part of Reflexions where you’re bopping the girl’s boobs and colorful circles appear. You know, the part that’s super questionable. Now, there is one interesting thing about the dressing room. In the options menu, you can toggle whether a girl’s dressing room outfit shows up during pinball, so you’re not just limited to Asuka & Co. in animal costumes.

There’s also a store, and as in Refexions it’s divided between the in-game store and Nintendo eShop for DLC.

Are we getting any good DLC?

If you look at what the Japanese version got, it consists of costumes, accessories, diorama poses, and background music from previous games in the series that you’ve already paid for a bunch of times but doesn’t transfer over because god forbid. Typical Senran stuff.

But no additional tables.

I find both pinball tables enjoyable, especially in freeplay mode, but it’s true that there’s not a lot of pinball action here; you’re showing up for the localization and general Senran silliness filtered through a pinball lens. I like it when I’m playing it, how about that?

Not a ringing endorsement.

It’s pretty clear that Honey Parade isn’t putting their A team on the Switch stuff. If you’re a Senran fanboy like myself, Peach Ball is probably worth it. If you just like video game pinball, there are better, more cost-effective options out there.

Anything else before I get back to Nep-Nep?

Haruka still doesn’t have a good figure and I don’t understand how that’s possible.

*These are actual Bally pinball tables that Zen Studios is too chicken to release for Pinball FX3.

I have been looking forward to this ever since it was announced. Im importing a physical copy from Amazon USA.
Im not expecting the game to be amazing, I just want it to be weird and fun.

Thank you for being on the boob beat, Zac!