Is it a good game, or a good Nep-Nep game?

I’m going back to the Review FAQ format for this one, as I did with this game’s predecessor, Superdimension Neptunia RPG. Check that link if you’re not familiar with the back-and-forth style, but I think that a meta-analysis of a game known for its meta-humor is appropriate.

Well, you were right about Neptune games coming to Switch.

Of course I was. This series, which blossomed—for better or for worse—on the PlayStation Vita had to find a new home after the death of that handheld, and I predicted that they’d land on the Nintendo Switch. Once Superdimension Neptunia RPG hit, I knew it was only a matter of time before the back-catalogue found its way here, and so we now have Megadimension Neptunia VII, which came out on the PS4 back in 2016.

Okay, so what is Megadimension Neptunia VII?

This series is nothing if not convoluted. Just go with it.

And that previous game…V Generation…is not on the Switch? How will I know what’s going on?

None of the previous Hyperdimension games are on the Switch, but I would welcome (to some degree) the Re;Birth remasters. That said, you probably won’t be too confused, as Megadimension is a self-contained story that actually does a pretty decent job of reintroducing all the major characters. If you’ve already played Superdimension Neptunia RPG, you’ll already have a pretty good understanding of heroines Neptune, Noire, Blanc, and Vert. Here, you’re joined by their siblings, Nepgear, Uni, and Rem & Rom. Vert doesn’t have a sibling (since she represents the Xbox).

Remember? The Hyperdimension games take place in a world called Gameindustri, which contain four areas: Planeptune (Sega), Lastastion (Playstation), Lowee (Nintendo), and Leanbox (Microsoft). They’re filled with meta-references to games, characters, and hardware—a lot of it doesn’t land, but it’s half the fun of this series. 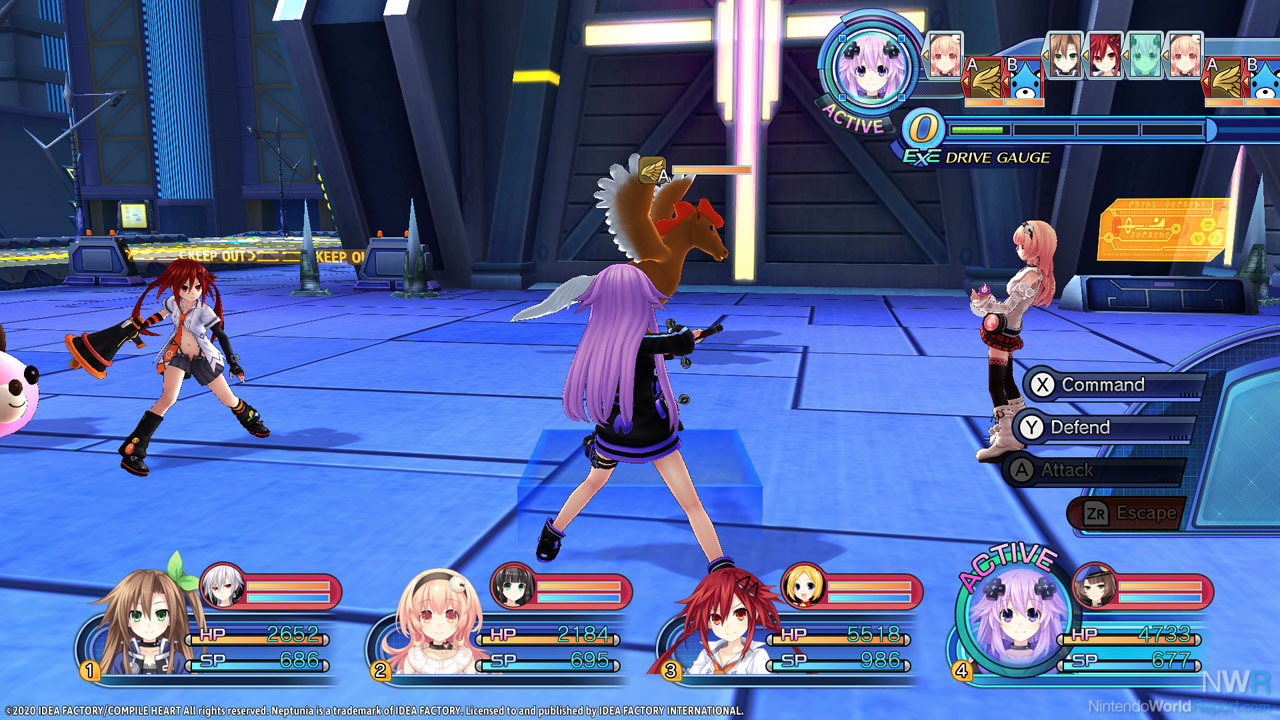 How many words has your word processor marked as “misspelled” so far?

How does Megadimension differ from Superdimension?

The gameplay is completely different. The one thing that’s similar is that half the game is a visual novel, and a large percentage of the visual novel portion is fully voiced. In terms of gameplay, your party (the makeup of which changes constantly) explores 3D dungeon-like environments, fighting enemies, finding items, and usually battling a boss or two. As in Superdimension, you can jump and swing your sword. Attacking enemies in the field with your sword before they attack you gives you the first turn in the ensuing battle. During battles, you can position your characters to a limited extent but you generally want to be in a position that lets you hit the enemies with melee attacks, or close to other characters to heal/buff them.

Do you rotate characters into formations, as in Superdimension?

There is a rotate mechanic, but it’s much more limited and doesn’t come into play until much, much later in the game: you can pair with another character, and that pairing results in a stat boost. You can swap characters on the battlefield but they can’t both be out at the same time. But like I said, you won’t get to that until very far in. In general, your characters have “attack zones” in front of them that are dictated by their equipped weapons, and once that zone is positioned over an enemy, you attack them with the face buttons.

There’s some strategy here. As your characters level up, they learn new “combo” moves, which can be set in the menu. There are three kinds of attacks—Rush, Power, and Standard. Different weapons allow different attack patterns. You select moves from a list and slot them into the pattern slots. Your goal is generally to use patterns that result in combos, which increases that pattern’s power. It sounds abstract, but you’ll understand it pretty quickly once you get into the system. I liked it, and it’s much more fluid than previous Hyperdimension games. 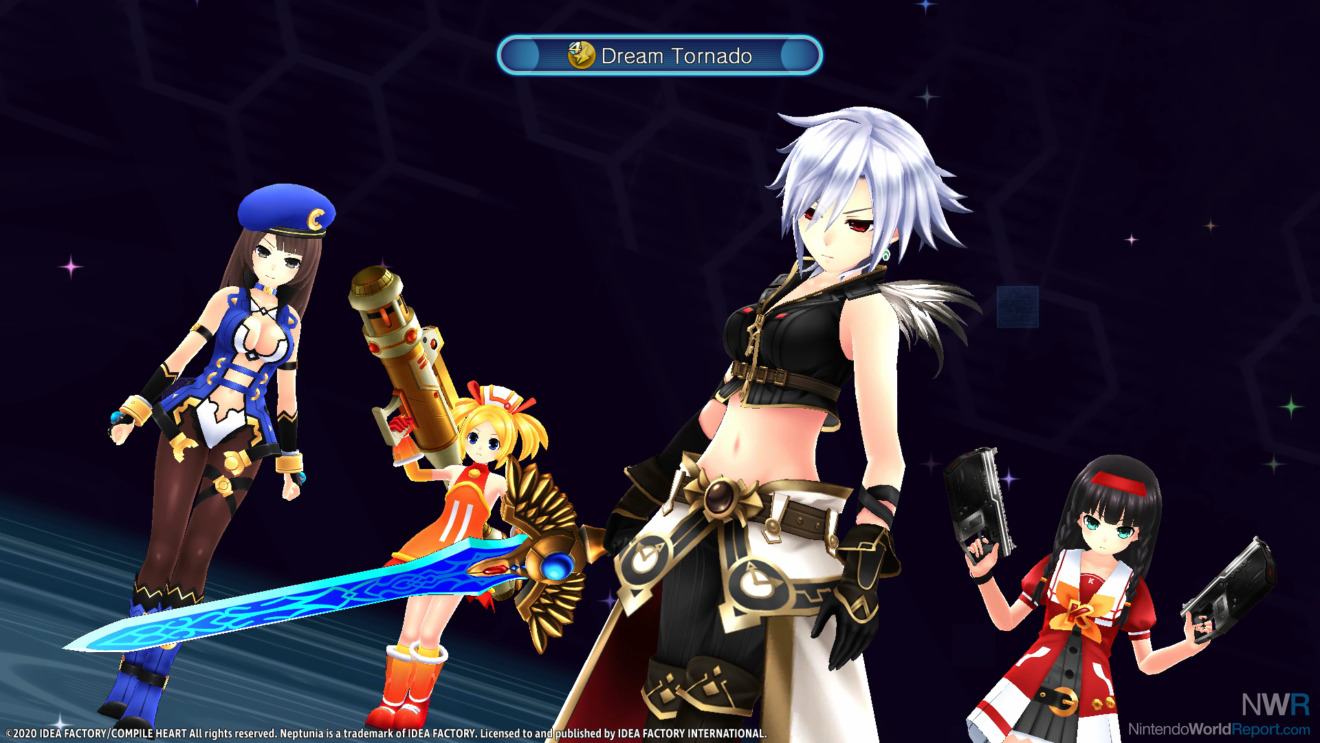 Are there still magic attacks and HDD transformations?

Yes, magic attacks are “Skills,” which cost SP to use. HDD transformations are not always available (they’re heavily scenario-dependent) but—when they are—can be activated by draining one bar of your EXE meter, which replenishes as you attack enemies (for best results, use Rush attacks). New to the series are Formation Attacks that require one or more bars of your EXE meter and certain positioning of your characters around a target. Much later in the game, the four main characters will get upgraded (“NEXT”) transformations that look pretty badass.

The unfortunate thing about Formation Attacks is that everyone has to be in the same transformation state to use them. Early in the game, you’ll be joined by a “grown-up” version of Neptune who can’t transform, so if you want to use a cooperative attack, Nepgear and Uzume have to de-power to use a cooperative attack. This is largely in service of the story, which is, in a word, bananapants.

I think you said before that the Nep-Nep games are notable not for their gameplay, but for their localizations.

That is absolutely true, although I really did like the combat in Superdimension. The story in Megadimension is a lot of fun, if overly convoluted and filled with stereotypical anime characters and tropes. The game’s second part at least does something interesting with the four main characters and their younger siblings. Nep games are lighthearted and typically humorous, and the voice cast (especially Neptune) has a good handle on the characters. I still love it whenever Neptune jumps and says "Like a kangaroo!"

I’m not as big a fan here, for a lot of reasons. You have to crowd around enemies to attack them, which leaves you wide open for retribution. Encounters can have a seemingly randomized number of enemies in them. Some have one or two while others may have eight, and if it’s a tougher area, you might get punched in the gut by high-level grunts and drain your resources trying to survive (PROTIP: do some grinding, try to get your characters up to Lv. 30 in the second part of the game). Thankfully, enemies in older areas don’t level up with you, so backtracking—which will happen often—is a walk in the park. I still can’t figure out how attack order is orchestrated. Skills or standard weapons that can target multiple enemies are extremely rare, so fights tend to go on longer than they should.

I should also say that putting even a short amount of time into grinding often results in you dominating your opponents, although there’s still the occasional difficulty spike. If you grind your characters into the low 20's in the first part of the game, you'll dominate the opposition. Additionally, the second section gives you access to “Scouts,” which will patrol dungeons on their own and, once you have a decent group of them, automate much of the loot grinding. Also, should you limp all the way to New Game+, subsequent playthroughs are MUCH more enjoyable.

How does it look?

The story sequences look fine but pretty cheap; each character portrait has three or four different poses that are repeated forever. Backgrounds are similarly economical and sometimes don’t really match what’s being discussed. Every once and awhile you’ll hit an illustration that’s pure fanservice, and given how old (or young) some of the characters are, they can be great or borderline creepy. You’ll at least meet a bunch of new characters, including C-Sha (Capcom), S-Sha (Square-Enix), B-Sha (Bandai-Namco), and K-Sha (Konami). Character models look clean but pretty simplistic, and you’ll see a lot of recycled enemies and bosses.

And the gameplay sections?

They generally look bad, and in fact were initially so choppy that I got seasick. That’s not a joke. The solution was to go into the system menu and turn off as many graphical “effects” as I could, which at least got the framerate to a place where I wasn’t feeling ill. For some reason it performs better in Handheld mode than docked, so I played it that way most of the time. Even so, Megadimension looks rough. We’re talking PS2-era environments and textures, lots of invisible walls, and a good amount of jank when trying to navigate certain structures (all you have is a jump). Character models look okay but nothing that I hadn’t already seen on the Vita. If anything, everything in the Vita series looks better and runs smoother than Megadimension. On more thing I’ll mention--it’s extremely easy to get turned around in the dungeons. It happened to me way too often. 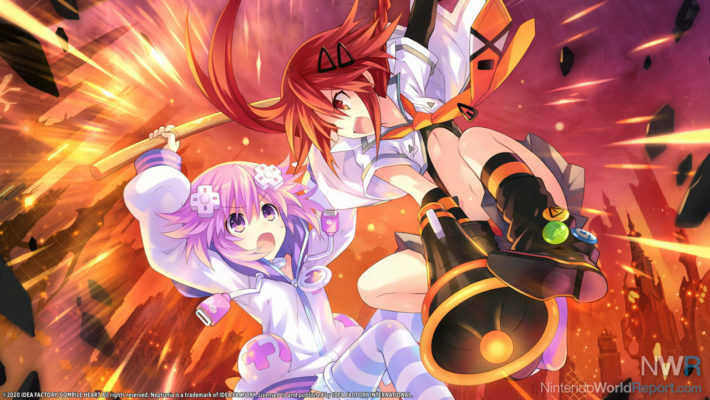 The game is also divided into three distinct sections, complete with title screens. The first third could be called a tutorial, but it goes on way too long, and the second part introduces so many new mechanics it’s a little overwhelming (although Hyperdimension veterans will have an easier time). The final third is where everything comes together, but by the time you get there, you’ll be so burned out on the gameplay that you’ll probably just watch a YouTube video of the story segments and say good riddance. Part of the issue is that you essentially play the second third of the game four times—once with each of the main characters.

It’s not my favorite Nep-Nep game, that’s for sure. The combat isn’t interesting enough to sustain a game this long, it’s pretty abysmal from a technical perspective, and I can’t shake the feeling that there was no budget. The story is typical Neptunia fluff, and if you liked previous adventures in this series, it’s enjoyable. It’s just a shame you can’t skip the gameplay parts and watch the story sequences by themselves.

I mean you probably can on YouTube or something.

That’s true. At the very least, wait for a sale. Superdimension is the better Nep Nep game. Now, all of that said, I actually can't stop playing Megadimension. I don't know why. It's the Nep Nep fan in me.

No. My one daki is from Freezing, thank you very much. I'll let you guess who it is.