The Deadpool of waifu games.

Since the Hyperdimension Neptunia series might be unfamiliar to those of you who don't own a PS Vita system (the output of which eventually amounted to nothing but Neptunia games), I thought a FAQ would be a good way to review the series' latest outing. For another example of this form, try this, and from there, other examples are found. Let's go!

What the heck is “Hyperdimension Neptunia?”

Okay but what are they? The Internet makes them look like waifu games.

They are absolutely waifu games. Really the only consistent thread through all of these games is the four main characters: Neptune, Noire, Blanc, and Vert, who each rule a region/city called, respectively, Planeptune, Lastation, Lowee, and Leanbox. The world itself is called Gamindustri.

This can’t be real.

Oh, it is. The series is incredibly meta; each game pokes fun at the genre conventions of whatever genre it’s occupying while also throwing in parody versions of popular video game icons as enemies. The “core” games—and I won’t even get into what constitutes the “core” games—are typically 3D JRPGs in the tradition of something like the Tales series but with a weirdly complex, and some might say obtuse, battle system. But if that’s not your cup of tea, don’t worry, the series also has entries in the rhythm, dating sim, turn-based tactics, musou, character action, and now throwback 2D JRPG genres. 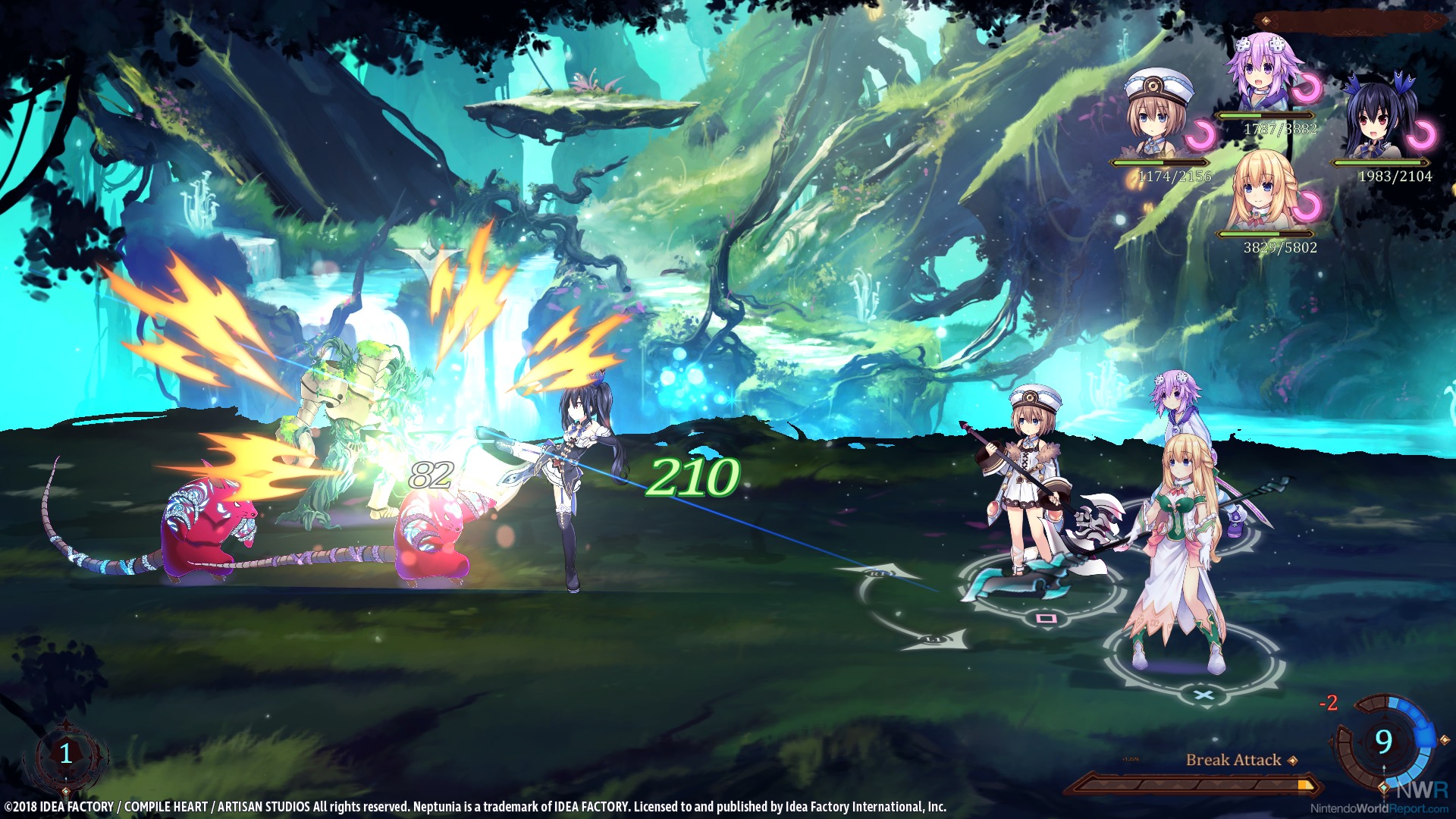 Most people make the assumption that the Hyperdimension games are nothing but fanservice, but I don’t think that’s true. While there is some fanservice, it’s not anything like Senran Kagura or (shudder) Gal*Gun. You play these games mostly for the excellent localization and meta-commentary.

Okay, let’s just…which of these are you actually reviewing?

I’ve been playing Super Neptunia RPG, from Canadian developer Artisan Studios, the first Nep-Nep game to be developed by a western studio. Remember how I said that the “core” Nep-Nep games are 3D JRPGs? This one is a more old-school 2D affair with some light platforming, lots of dungeon-crawling, and a heavy focus on fetch-quests. It also features an interesting combat system that takes some getting used to but winds up being surprisingly flexible.

Super Neptunia is a side-scroller where you control Neptune as she jumps and dashes through “dungeons,” which are just large maps connecting different areas of Gamindustri. Each area features a unique enemy pool, magic stones, and treasure boxes. You can look at the map at any time (unless you’re in a town or transitional area) with the Minus button. The map is handy in that it shows most, but maybe not all, treasure boxes and enemies, so you can plan your route accordingly. However, while running around, enemies are represented by Dogoos (the Nep-Nep version of Slimes), which are easily avoided. It never hurts to grind, but if your party needs to get to an Inn STAT, the game is happy to let you leap over danger. Some parts of the map will be inaccessible until you upgrade your jumping power.

For the most part, it is. My only issue is that the maps don’t label the exit points. In the Twin Mountains map, for example, there are five exits, but the map only shows you where the exits are (marked with arrows) so you’ll have to memorize where they actually go. This wound up bugging me a lot, and it might not bug you at all, but it just seems like a bizarre thing to leave out.

So aside from running around sidescrolling maps, what do you spend most of your time doing?

Like other Nep-Nep games, Super Neptunia RPG has a big focus on fetch quests. This guy wants you to find and bring him an Elixir, or this girl wants you to bring her 20 pieces of cat fur. Some quest lines require multiple steps and the rewards aren’t always worth the trouble. How the quests are written (in your quest log) is also inconsistent. Sometimes the description will tell you where to report back to the quest-giver, which is handy because there are a lot of quests given by a lot of people, but just as often it does not. It took way too much running around for me to refind the girl who asked for beauty cream ingredients because the description forgot to mention that she’s in Lastation Harbor.

It is, however, still supremely satisfying to complete quests and watch your quest log shrink in size. 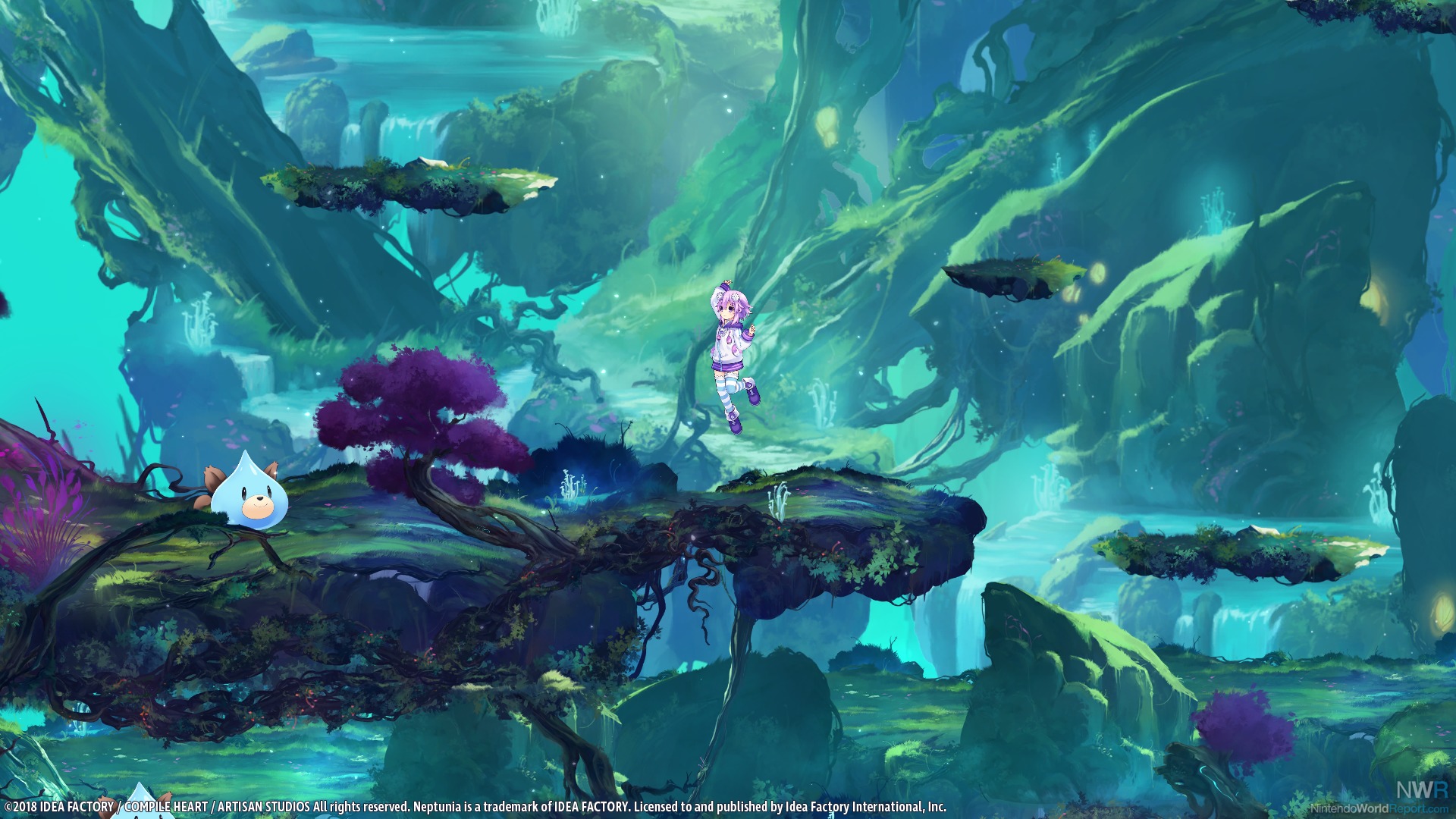 You’ll also be doing a lot of combat. Combat is complicated.

Do you have typical RPG accoutrements like weapons, armor, and accessories?

You do, and they’re usually purchased at weapon shops in towns for increasingly impractical prices. Each character can equip a weapon, wrist brace/glove, and crown/belt. Most equipment can only be worn by one or two characters, which puts a welcome limit to my min/max tendencies. Most equipment comes with skills that unlock after a certain amount of experience points. That is, experience you earn from battles goes towards your character’s level and your equipment’s skills. Once a skill is “mastered,” it is retained by the character even if they’re no longer using that weapon.

Let’s say you equip Noire with a sword that has the “Auto Regen” skill, which requires 99 points to master.

Use that sword in battle until you get 99 experience points while using it, and you’ll “master” Auto Regen and can use it even once you’ve switched to a better sword.

Yes it is, and it encourages you to grind to get dem mad skills. Skills translate to passive skills you can equip to each character or new attacks that can be assigned to that character depending on their position in formations.

This is where Super Neptunia tries to differentiate itself from other RPGs, I think. Once you have more than one character in your party, you can start experimenting with Formations. Pressing L or R during battle swaps Formations, which really just means your characters change places. In the Formation menu outside of combat, you can assign everybody skills (attacks) based on their position. Formations also have “themes,” like melee attacks, magic attacks, etc. that limit a character’s skills in any given position. Neptune, for example, can use her ice-based attack when at the front of the party, but she’s limited to buffs or healing magic when she’s in other positions.

It really does. You’ll want to get as diverse an attack selection as you possibly can since most enemies are weak to one or two attack types. One other wrinkle to combat is that your party spends “Action Points” to use attacks. You have this circular meter filling up during fights, from 1 to 12. Everybody shares the same AP pool, so if Blanc uses an attack that drains 4 AP, suddenly everyone else is limited to 8 AP (but AP is constantly going up). Hitting enemies with attack types that they’re weak against does not drain the AP gauge, which is why it’s important to have a diverse lineup of skills.

And then there are Break Attacks and Goddess Transformations…

This may all sound overwhelming but it eventually clicked with me. The biggest help is that when you switch Formations, little icons flash over each character’s face to remind you what kind of attack they’re set to use. One thing I will say is that once you create a Formation set for a given area’s unique enemy pool, you can zero in on weaknesses and grind for experience and equipment skills very easily. I found myself severely over-leveled in most situations thanks to this strategy. It’s pretty glorious.

How’s it look and sound?

Super Neptunia looks distinct from every other Nep-Nep game, and it looks good. Yeah, there are a lot of canned animations during cutscenes, but that’s more a genre trope than anything else. There’s a ton of voice acting, most of which is fantastic, and the music is subtle but enjoyable. I like the battle theme. Neptune sounds a lot of Quinn Morgendorffer (from Daria) which is probably unintentional but made me chuckle. Unfortunately, the game’s framerate starts to chug during battles involving a lot of animation and/or effects, to the point where input lag becomes a thing. Some of the scene transitions take a weirdly long time as well. Hopefully these things can be addressed in a patch.

Given that this is an RPG, how’s the story?

It doesn’t make a ton of sense but it has its moments.

Yeah, it’s a cute RPG that’s not super demanding and can easily be played while you watch TV or lie in bed. There are a few places where it’s not super clear what you’re supposed to do next (find all the Mysterious Grasses before visiting the fairgrounds, kids, and those Grasses are all in the Twin Mountains) but overall it’s pretty straightforward. And there's swimsuit DLC coming in July, so that's cool.

One more question before I go. Do you have any Neptunia figures?

To my eternal shame, I do not.

But do you have any Neptunia dakis?