Let’s do another one of these. They’re fun and fit certain games better than the normal review format. This game seemed ripe for some back-and-forth.

Oh, dude. Huge fan. You know I like my fanservice games, and Senran is 250% a fanservice game series. I own every Senran Kagura game that’s hit our fair western shores. I have two Senran figures. I have one Senran oppai mousepad. I have an illustration of Asuka behind glass in the hopes of one day getting it autographed by series artist Nan Yaegashi.

Well I assume you want to talk about the latest release in this franchise: Senran Kagura Reflexions?

…I don’t know if I want to anymore. 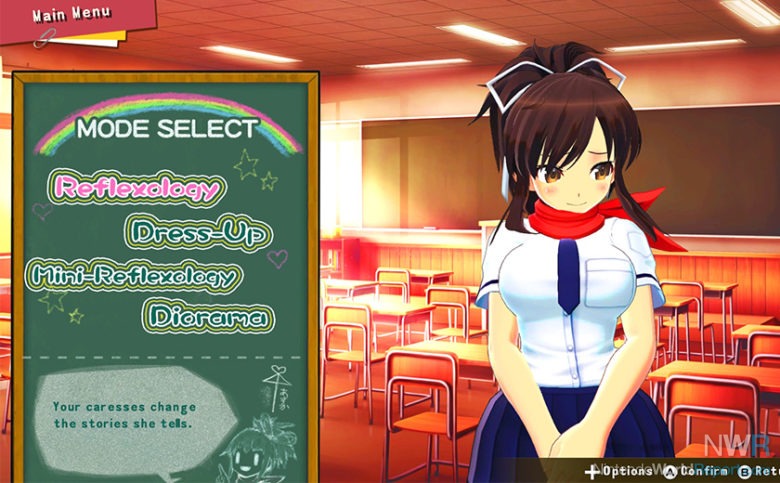 So the story is about series mascot Asuka who wants somebody to give her a massage while she fantasizes about things like being a pop idol or naughty teacher.

Before we go too much farther, what’s it rated M for?

Well this all seems PERFECTLY FINE.

Yeah, I’m not sure I like it either. Here’s the problem: the whole game is mildly pervy.

As the game opens, Asuka tells you she really likes you and asks you to hold her hand and feel her pulse. You do this by selecting an area on her palm or fingers with the sticks and pressing a shoulder button to press down. You feel her pulse through the magic of HD Rumble, and it’s a pretty good effect.

Then she starts having fantasies. 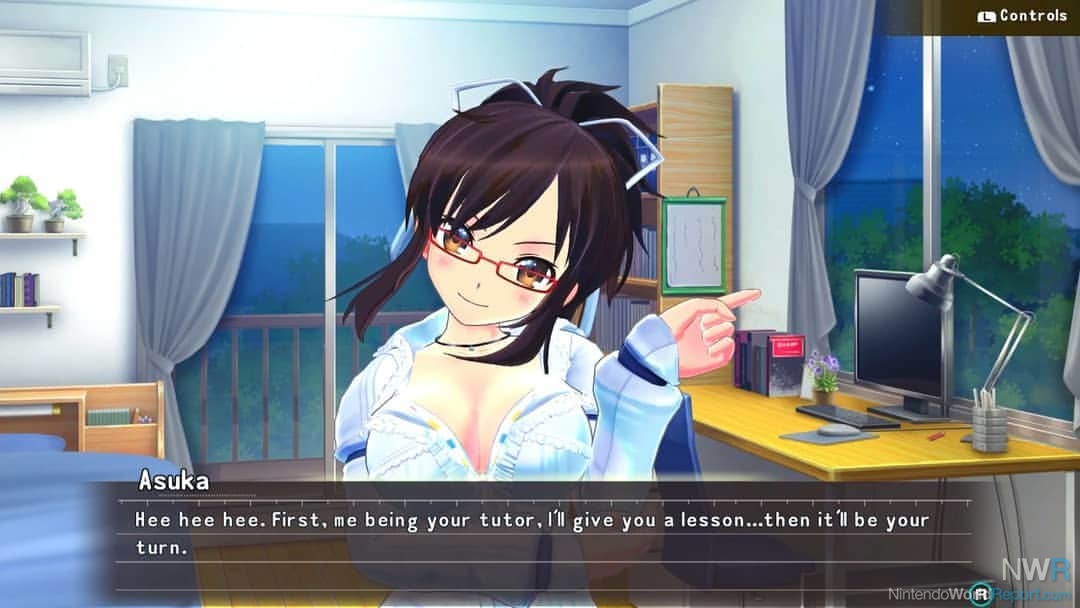 She has several different fantasies depending on where you take her pulse. In one she’s a pop idol, in another she’s a naughty school teacher, and in another she’s…uh…hmmm.

That really does seem like something the localization team could have changed and nobody would have minded.

*sobbing in a corner*

In all these fantasies, she says something like “I’m so nervous, will you calm me down?” And you say sure, because you’re a good friend or, at least, older brother and that’s totally something siblings do for each other.

*rocking back and forth* 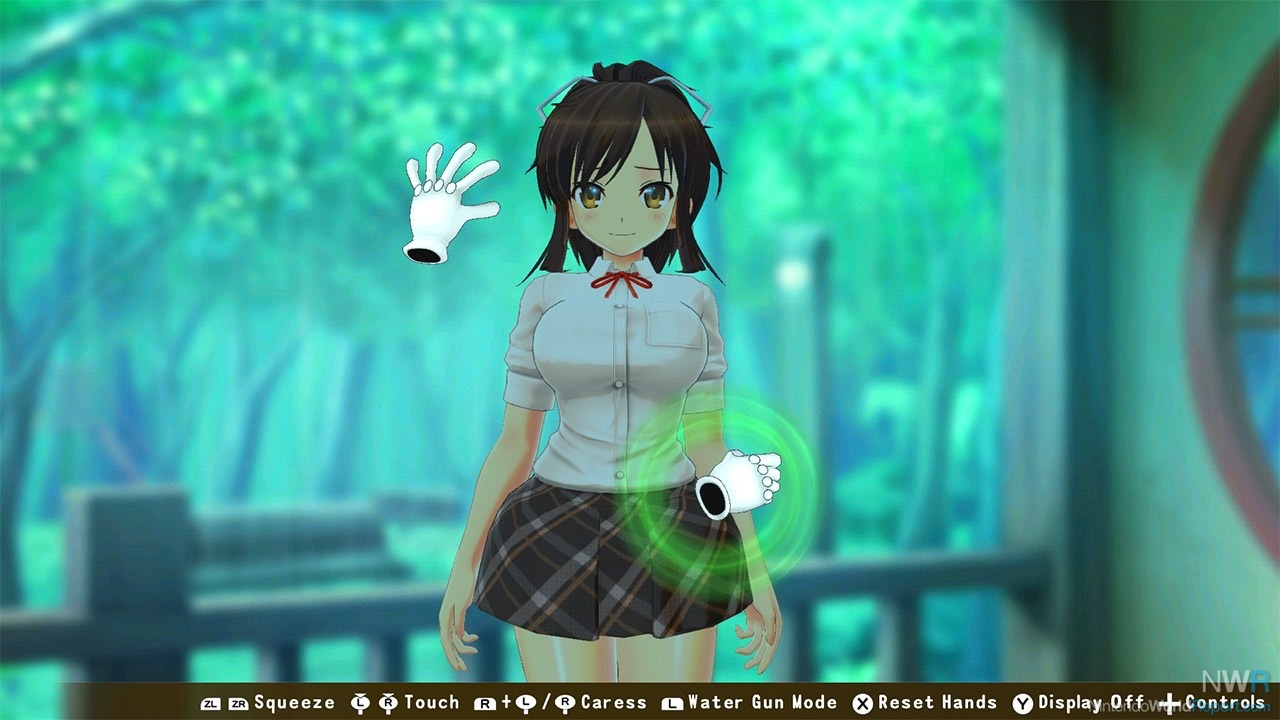 You’re then presented with Asuka in full body view, standing there, and you can rotate her and scroll up and down her body and use the buttons to grope, smack, and rub various parts of her body. And if you really want to, you can literally hose her down with water. They’ve pulled this directly from Peach Beach Splash.

*staring blankly into the distance*

As you grope, smack, and rub her, different parts of her body light up with one of five colors. “Activate” one of those colors enough and you’ll get a massage prompt.

At least…at least it gets better now because you’re doing something that’s not skeevy?

Yes and no. You then use motion controls (or buttons) to knock her inner thigh, take a roller to the back of her knee, use a brush on her arm, or…uh…take a vibrating thingamabob to her abdomen. These actions don’t require use of motion control but it is encouraged. HD Rumble feeds into the entire simulation. Your right Joy-Con is going to get a good workout, especially with the vibrating tool.

Is there anything to this?

You’re trying to keep a certain rhythm to maintain a bar within a certain window of tolerance as you try to get her “love” meter filled prior to time running out, at which point you get a “FINISH” prompt and she collapses in a heap of ecstasy. Like you do.

And then the whole thing repeats. Each time you go through a fantasy, you try to focus on a single color so that you fill up meta-game crystals that correspond to a meta-game puzzle piece (“pieces of her heart”) and then the game just sort of ends but you can replay it whenever. Ultimately, your goal is to complete all the fantasies with all five colors. I guess.

Why would I do that?

To unlock wardrobe options, voice sets, background music, that sort of thing. So if half of Reflexions is mildly pervy massage mini-games, the other half is dress-up, which has become a bigger and bigger part of the series as it’s gone on. You can dress Asuka up in what amounts to a bunch of Peach Beach Splash outfits, including a “transparent” shirt.

Is it actually transparent?

You spray it with water and you eventually can see her bikini top underneath. 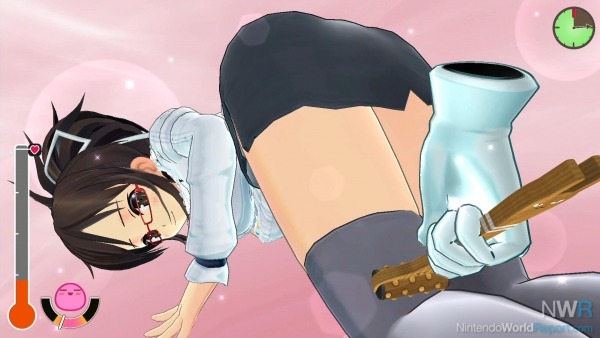 I mean, I know. This series is weirdly puritanical for how over-the-top sexualized it is. In fact, this gets me to an issue I’ve had with the series since, I dunno, probably Estival Versus (PS4/Vita). It’s an issue that really comes to the forefront in Reflexations due entirely to the subject matter: the game is 250% mixed messages.

Hear me out. This is a game that urges you to grope Asuka’s half-naked body while she moans and squirms, then perform sensual massages on her. However, if you grab her oversized boobs or smack her caboose, she reacts with embarrassment or anger, but then later she’s pretty okay with it, saying she’s never been touched like that before and she didn’t know you felt that way.

This series needs to do one of two things: go all the way or scale WAY back on the body-groping mini-games. Just commit to it one way or another. The series’ attitudes regarding sexuality are all over the map and Reflexions is the nadir. Senran has been stripping its fighters of their clothing for a few games now, but Chibi faces or shiny blobs cover up the naughty bits.

It kind of sounds like you just want Asuka to get her top off.

But no, I get it, it’s a weird disconnect.

I’m trying to think of a good analogy. It would be like the instruction manual telling you how to perform Ryu’s Hadouken but when you do it in the game, he just says “nah ah ah!” Don’t offer me a gameplay mechanic that you’re not willing to follow through on. Asuka’s coquettish reluctance also just drives home the creepy voyeuristic angle. It would be one thing if she has some agency regarding her sexuality (like she’s into it) but as it stands, the whole thing becomes super awkward.

By the way, you said three of the massage mini-games use the right Joy-Con. What’s the left one doing?

I’ll tell you when you’re older.

So that’s it? What’s the point? What are you working towards?

Clothing options, music tracks, voice sets, and unlockable front-end images. I can’t figure out exactly how you unlock the images—I got the athletic fantasy one but I don’t know how it happened. But yeah, there’s not a lot here. However, because this is a Senran Kagura game, there will be DLC in the form of other characters to massage.

Do we know who?

Yep: Yumi (who is my waifu), Murasaki, Ryona, and Yomi. The only possible reason you’d jump at this is to see if their reactions differ significantly from Asuka, and more massage mini-games wouldn’t hurt. Now it’s interesting that they’ve chosen Murasaki for this game—she’s been portrayed as emotionally closed off and timid. Ryona could also be a change of pace, as she’s been written as “naughtier” than all the other girls by a country mile. Yumi and Yomi, however, probably won’t diverge much from Asuka’s script. I also wonder if their stories will be wholly separated from Asuka’s or if everybody will be able to swap outfits and accessories.

You pretty quickly unlock a fifth massage mini-game which is just “SKIP,” allowing you to focus exclusively on checking colors off your list. I started doing this the second it became available. They’ve managed to butcher diorama mode and there was already little point to it in the first place. I also want to give credit where credit is due: the character models in this game (and Peach Beach Splash) are aesthetically and technically wonderful. They’ve figured out clothing in a way that no other developer (that I’ve seen) has and the character models are clean and don’t clip.

Bottom line this one for me so we can move on.

Reflexions is not great. There’s not much content, there aren’t enough massage mini-games, there aren’t enough dress-up options (at least, not yet), and the voyeuristic tone is creepy. And then there’s the fantasy involving Asuka being your “little sister,” which almost makes me want to nuke the game from orbit. For the Senran Kagura superfan, it’s probably required reading but everyone else can just wait for Peach Beach Pinball.

Right, and OMG.... bikinis in Tokyo Mirage Sessions are too sexual, we should totally edit those out for American players.

If anyone wants to see gameplay video, I streamed the game yesterday. It sure is weird, but I like it.
https://youtu.be/2uGURx0CYrI

I really enjoyed this back-and-forth format. I could practically hear James' and John's voice in my head! 😁