Did Nintendo's balance sheet have a happy holiday season? 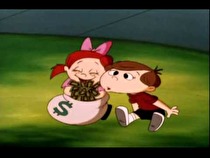 Despite a less than stellar holiday lineup, Nintendo managed to maintain profitability in their 3rd fiscal quarter on the back of strong performance of evergreen titles and amiibo.

Nintendo recorded an operating profit of 33.5bn yen (approximately US$277m) in the quarter, with a net income net of currency of 29.1bn yen ($241mn). Download sales, including DLC, were approximately 30.5bn yen for the nine months since April ($252mn), approximately 16.7% of net sales in that timeframe.

The Wii U sold approximately 1.87mn units in the 3rd quarter, down slightly from last year's Smash Bros-fueled quarter, and is now at 12.6mn units overall.

In more concerning news, the 3DS family of systems was down dramatically over the same time last year due to a lack of a Smash Bros and Pokémon release: 3.6mn units were sold in the quarter, compared to approximately 5mn in the same period last year. The 3DS family is now at 57.94mn sold.

amiibo continues to drive profits for Nintendo, as 9.9mn units were sold worldwide during the quarter. To date, Nintendo has sold approximately 31mn amiibo - including 20 million since April - and 21 million amiibo cards.

On the Wii U front, Splatoon continues to be a stunning success for Nintendo as it sold 4.06 million copies worldwide since its May release, at a roughly 2:1 overseas-Japan split. Super Mario Maker has already shipped 3.34mn copies since September. Mario Kart 8 also continues to pull stunning numbers, with 1.2mn sold in the quarter and 7.24mn overall representing a 57% attach rate for the game. A strong performance in North America saw Yoshi's Woolly World sell 1.31mn units.

The 3DS did have some strong movers as well: Animal Crossing Happy Home Designer has sold 2.93mn copies worldwide as of December 31, while The Legend of Zelda: Tri Force Heroes did reach a million copies sold (1.08mn). Mario Kart 7 has sold 13mn copies, while Pokémon XY has sold 14.46mn copies along with Omega Ruby/Alpha Sapphire selling 11.46mn copies.

Following its reconfirmation in November's Nintendo Direct and subsequent PR, The Legend of Zelda Wii U is listing a 2016 release date, along with Genei Ibunroku #FE and Metroid Prime: Federation Force. The Projects (Guard and Giant Robot) are now listing "TBD" along with the perpetually teased Dr. Kawashima's Devilish Brain Training for Europe. Full charts are available below: 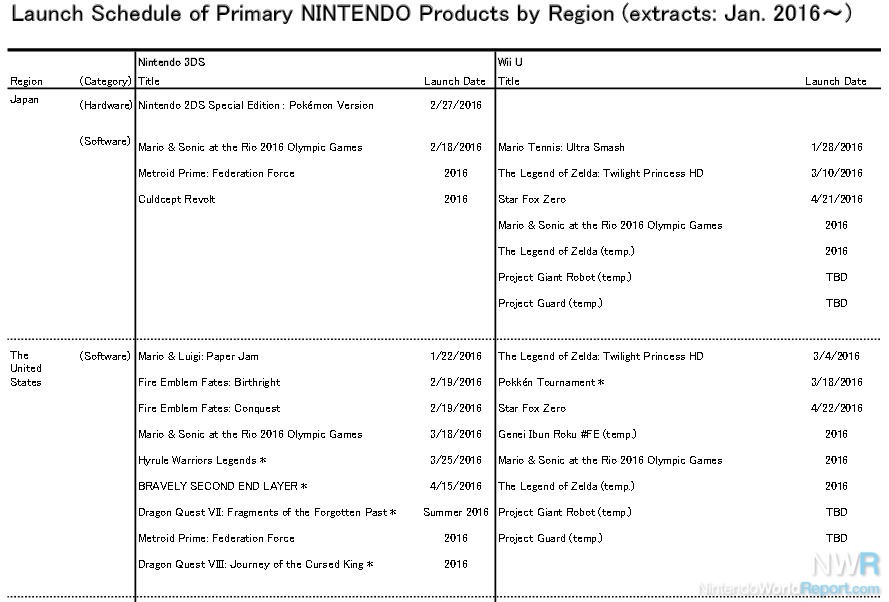 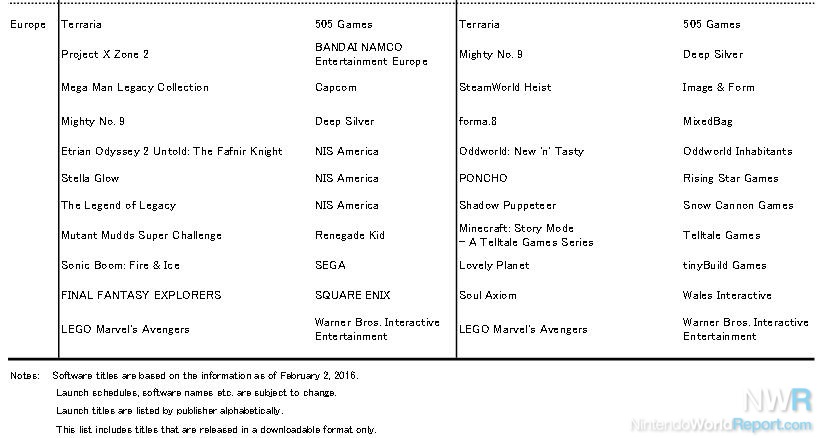 All currency conversions provided by xe.com and are accurate as of the time of the article.

Surprise hit:Yoshi's Woolly World, it's already outsold Wario Land Shake it at 1.06 mn and may even over take Kirby's Epic Yarn at 1.85 mn, both of which were on the Wii.

Surprise hit:Yoshi's Woolly World, it's already outsold Wario Land Shake it at 1.06 mn and may even over take Kirby's Epic Yarn at 1.85 mn, both of which were on the Wii.

It's also sold better then Yoshi's New Island, which is pretty crazy since 3DS games have pretty much universally sold better then their Wii U counterparts.  Hopefully that sends the message to Nintendo to stop letting Artoon or whatever the hell that worthless company calls themselves make games anymore.  Even for something like Yoshi, the fans do care about quality Nintendo.

Are Mario Kart 8 bundles included in those figures?  I own Mario Kart 8 simply because when I found a Wii U on sale it was the only bundle available.  If you bought a Wii U this Christmas you probably "bought" Mario Kart 8.  There have been other bundled games though that don't have the same attach rate so Mario Kart deserves credit still but the figures will be a little skewed by the bundle.  I figure attach rate also is probably higher on big games on underselling consoles due to a lack of competition.  Because the console has weak support there are less options for owners.  Of course you're going to get Melee on the Cube and MK8 on the Wii U because what else are you going to get?  With a  smaller selection to pick from you're going to see more of the userbase buying the same titles.

Even with something like Yoshi, it might have sold better partially because the lineup is so thin that everyone bought it because they either bought it or played nothing until the next notable game came out.  Each Wii U game is going to stand out in a way it wouldn't if the console had better support.  It's weird.  The low userbase will cap the potential sales but the attach rate will be better because of a lack of titles competing.

As for the 3DS, no surprise it didn't sell as well as it had a really weak year in terms of releases.  What did it have besides Monster Hunter and Yo-Kai Watch?  Nintendo pretty much neglected it.

Yoshi also had and amiibo bundle, don't forget that.

I think Nintendo witheld a Pokemon release for the anniversary and to give Yokai Watch some breathing room.  Probably a mistake.

It doesn't sound too bad for the twilight years of their systems.

As for the 3DS, no surprise it didn't sell as well as it had a really weak year in terms of releases.  What did it have besides Monster Hunter and Yo-Kai Watch?  Nintendo pretty much neglected it.

They didn't neglect it. Instead, the bodies of Code Name STEAM, Animal Crossing: Happy Home Designer, and The Legend of Zelda: Tri Force Heroes were thrown at it.

Happy Home designer did nearly 3 mil in like, less than 3 months? 1 month?  Wow.  Guess we'll be seeing more of that spin-off then.

About half a year in Japan (where it sold like chocolate covered crack or Yo-Kai Watch) and about three momths in the rest of the world (...not so much).