So local multiplayer. Such final score....

The emoji icons do work better than Morse code at the very least....

It’s like Weekend at Bernie’s but with two dead Links....

HANDS-ON: A beautifully weird game that excels in its multiplayer elements....


Communication in The Legend of Zelda: Tri Force Heroes Can Be Problematic

HANDS-ON: Whether you're shooting an arrow or blowing hot air, Tri Force Heroes is fun as long as your teammates can read your mind....

Ranking Nintendo's Past 10 Holiday Lineups: Where Might 2015 Wind Up?

A little of everything can be seen here....

I guess this makes Jon the show's Cloud Strife? I'm not comfortable with this analogy....

Who would have thought finding a guest would be as easy as throwing around a letter....

The Famicrew dishes out tips for making Mario and cooperating in Zelda!...

New Yoshi games don't always require his return, as far as he knows....

Splatoon and Zelda: Tri Force Heroes are just the start. Will we have to suffer without voice chat forever?... 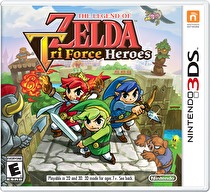