My Nintendo Launching Worldwide In March

And some new details about the expanded service. 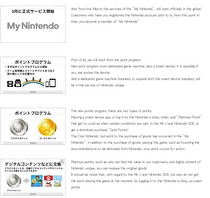 The My Nintendo loyalty program will be launching before the end of the quarter.

Nintendo announced the details of the program at a shareholder's meeting following last night's release of their 3rd quarter financials. The program will launch in all major territories this March, and will feature two classes of points:

The existing Nintendo Network ID structure appears to migrate over to My Nintendo, but the game achievements may not be available for 3DS or Wii U titles - this would begin with the next console/handheld.

Exciting, but a pity it may not apply for 3DS/Wii U achievements. I do hope they come up with a more unique term than achievements in-game. I liked how they were considered stamps in individual titles.

I like how Nintendo put "achievements" in the same tier as browsing the eshop and their websites. I doubt even Nintendo's games could get me re-engaged in the soul-sucking mire that is playing for achievements and trophies. I get why people do it but the practice nearly ruined video games for me. Needless to say, I turn those notifications off and stopped checking the lists.

It's way to early to judge, but I'm not loving the early reports. Just doesn't sound like something that will offer me much value.


But then again, I'm a bit too old-school and don't love where video games are going anyway.  Limited rights due to digital content (with pricing that isn't lower than retail) and forced online play to ensure planned obsolescence just isn't my thing.
:-\

It sounds like there are still details missing here, so I guess we may have to wait until it launches before we see how it all works.