All your favorite Marvel goodies are coming along for the ride. 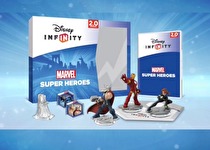 With the initial announcement of Disney Infinity: Marvel Super Heroes, fans gained a glimpse into some of the new figures on their way this fall. A more detailed list of Power Discs has since been made available, and fans will be excited to see just what else is in store.

Power Disc packs include two random Power Discs from a single release series, such as series 1 or series 2, and will continue to be available for $4.99 each.

The starter pack releasing for Marvel Super Heroes will be priced at $74.99 and will include:

oh speaking of on disc DLC,

And this is why Disney Infinity is NOT selling more than their competitors because the game+figures and etc. ARE TOO EXPENSIVE!! Stick with the PC version for a cheaper and better experience. I can deal with Skylanders but not this. I guess that explains why I see the Disney Infinity figures just sitting at stores. I want to love this game but I keep going back to Skylanders for some reason. I just hope that one day, Disney Interactive gets it or this game will become NOTHING, but a sad gimmick that nobody will care about years later along the road. GET IT TOGETHER DISNEY!  :cool;

Actually this article says you're wrong. Disney infinity is #10 and Skylanders was #13 according to this. http://venturebeat.com/2014/04/30/a-toy-story-disney-infinity-is-making-more-money-than-skylanders/

This is the best way to make a quick buck with disney buying marvel... infinity characters are collectable not useless waste of space like Skylanders. .. The base is quality ...the characters are vinyl and displayable. .. anyone who doesn't live under a rock knows 90% of disney characters...the only thing my kids know from Skylanders is the logo...the new base set looks great and like last Christmas every store will have them down to 50 bucks for a starter set...  online pc play would end up being a monthly charge like wow as well as people selling the online cards for money from the figures they bought... oh wait they already do that.
Now if only nintendo would think harder about gamers and where their priorities are pls stop with the novelty crap like a tablet for the adults my kids would never be able to get their hands on that cause I DONT WANT THEM TO BREAK IT... its cheap and wont last...