Folks from Ubisoft Montpelier band together to fight the man. 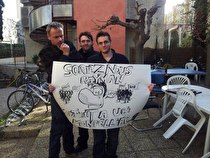 Members from Ubisoft's Montpelier studio have began to protest the company's decision to delay Rayman Legends. Members, including Rayman creator Michel Ancel, have taken to the streets with signs that call for Ubisoft to release Rayman Legends on its originally scheduled launch date.

Legends was recently delayed to September from its scheduled February 26 release date. With the delay came news that the game would also see release alongside a PS3 and Xbox 360 version. Ubisoft has officially commented that the reason behind the delay was to release the game on other platforms, noting that Rayman Legends is complete on Wii U.

I think its a combination of Yes they are and that it allows the developers to vent because ultimately the decision was made and as long as they are working its not doing anymore damage to them from what they've already dropped.

In Europe anything goes.

I believe this picture is misleading. Apperently a fan of rayman went to protest in front of the developers studios, and the creators came and took pictures with him as a nice gesture.

It's worse PR to fire them over this than to ignore it and let them say what everyone else is saying.

Ubisoft could be allowing it because it might win back a few Wii U owners.  It puts the developers back on the side of the gamers, and if you saw Ancel's Twitter the other day he was begging Wii U owners not to boycott the game because it wasn't his teams fault that it was being delayed.  So maybe this is a solidarity ploy to try and help sales later?  But I doubt it's anything that devious.

It's worse PR to fire them over this than to ignore it and let them say what everyone else is saying.

In that case, with the way things have been going, I'm surprised Ubisoft top brass didn't fire all of them then rape their mothers...

Can you imagine what would happen if the game were leaked during this delay?


They seem to have some pretty disgruntled developers over there...

Those workers would get fired and sued, and maybe not get hired by anyone else.

Michel Ancel would be fine. Someone would hire him because of who he is and he could take the others with him. Still, no one in their right mind would do this. I don't think they would mind getting fired because leaking the game is something only those on their way out the door would do, but that lawsuit would be devastating. And it might even be a considered a crime.

Yes, a leak would be a breach of Contract and serious enough that it could black list you from the industry.

What's the point of leaking the game is Wii U isn't hacked yet.

This just keeps getting messier.

That's a good way to stick to your boss in a way that isn't really that damaging.  It isn't like they've sabotaged Ubisoft's business or anything, they've just voiced their displeasure.

It would be silly for Ubisoft to fire them for something so minor plus are you going to fire an entire studio?  It's not good business to make rash decisions based on minor slights.

Of course I've noticed in my life that it's not uncommon for authority figures to consider insubordination to be the ultimate sin.  Ubisoft shouldn't do much about this but I would not be surprised if they did.  "That's dumb" is a good justification to not do something but it won't necessarily prevent it.