Madden's got an all-new Franchise mode with pointer controls and an interactive campus.

Out of the box, Madden NFL 10 was missing a standard game mode that has more or less defined the series over the past decade. That mode was the Franchise mode, which originated in the late '90s, and quickly became the way that a lot of players experienced Madden.

As you might know, Madden NFL 10 was a full-on revamp of Madden on Wii. The graphics engine was built from the ground up and featured a new art style, and there were several new Wii-focused modes. The reason why Franchise was left in the dust was that they ran out of time. They did offer a consolation prize to owners of Madden NFL 10 who expected their dose of strategic management as the Franchise mode, ripped from the previous year's game, was included, but it was under lock and key by a code that was unveiled a few days after the game came out. This happened because the interface didn't match up with the rest of the game, and the development team didn't want the mode to be confused as part of the new interface.

In Madden NFL 11, one of the main goals was to introduce a stronger single-player mode, and this meant making the Franchise mode bigger and better than ever. So, with the idea of making a new Wii-specific version of the classic mode, the team began by asking the question "Why do people love Franchise mode?"

The groundwork was laid, and the idea of a 'legacy score' was developed. In the new Franchise mode, the goal is to slowly move up the ranks of the top 25 teams of all time, with the 1980s San Francisco 49ners at number one, and the 1980s Denver Broncos in the 25th spot.

The list was deliberated on for quite some time. "It was real fun to do," Read said. "A bunch of us got together and we pulled out who we thought were the greatest teams of all time. We looked at stuff like overall popularity, Super Bowl wins and losses, etc. Then we debated amongst ourselves for a couple of months."

Your team's legacy score, which is what is matched up against the others, comes from three different areas: fan support, finances, and team performance. While the three areas can be built up by managing your team well and performing well, they can also receive boosts from scenarios that pop up after every game. These scenarios are often humorous, and depending on how you respond to them, you can bump one or more of the three categories up or down. 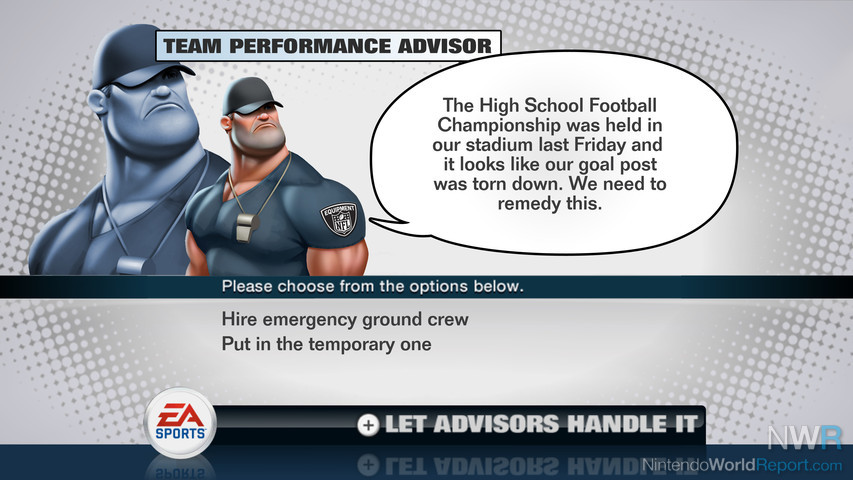 An example of a scenario.

Each year, you're given a set of expectations in each category. If you fail one, you'll get a warning initially, but fail again, and you can actually lose Franchise mode, a first for the series. You can still continue with your team, but you can't move up on the legacy list anymore. Conversely, you can also win franchise mode by surpassing the '80s 49ners as the best team ever.

This new mode also brings about a whole new pointer control method. Instead of the endless onslaught of menus in previous Franchise modes, the new mode features an interactive campus, featuring a front office building, the stadium, and more, that simplifies the menus into a few separate areas that are all clearly labeled and easily accessible. Each campus is tailored for the team, and they all feature a mini version of the team's stadium.

The campus also reflects how your team is performing. Perform well, and the buildings will become made with gold and the locals will erect a larger-than-life statue of your visage. Perform poorly and the campus will look more like a shanty town and fans will picket outside the front office. 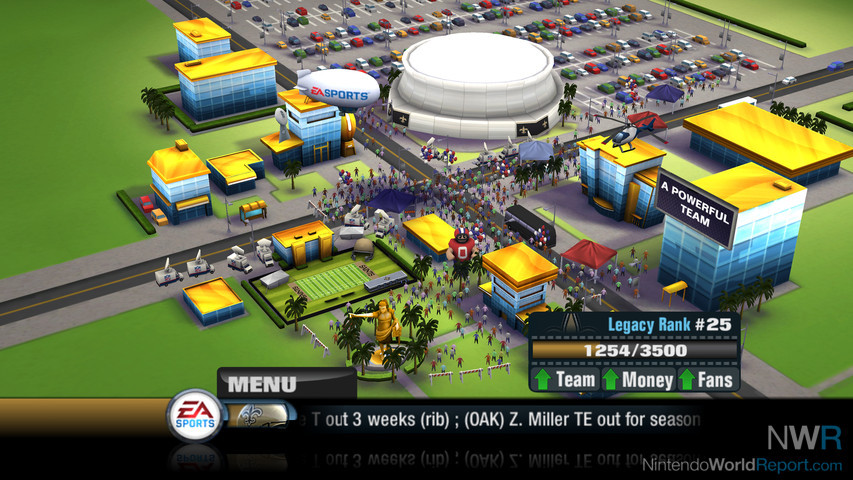 The whole idea behind this mode was to make a new original take on the series staple Franchise mode that fit in with the art style and concept behind the new versions of Madden on Wii. You can find out for yourself if Madden NFL 11's new mode succeeds when the game hits stores on August 10.

It certainly sounds promising with franchise mode, but could you do something with your review that I bet no one else will?

Play through as much as you can, but SIMULATE like 10 seasons worht of franchise mode as best you can. See if over the years like the offensive players seem to receive stat boots more than the defense, or vise versa. Does it seem to skew weird tendencies that aren't likely to happen? Do players retire randomly at weird ages or at about the right time? How good are the rookies, are they overpowered or are they too weak to ever make a difference? Are there weird statistical errors occurring.

I'm sure there is other stuff that I'm forgetting.

Having played the holy heck out of Madden and NCAA 2004, as good of games as they were, these were problems I found as the seasons wore on. I also think of a game like MLB Power Pros for the Wii, which for whatever reason has 75% of the players batting .240 or below. Game works real well, but being a stat guy this bugs the hell out of me.

And knowing about the online structure would be big to know of course too.

I look forward to the review, but again, another good read in this series and I really hope this is a great Madden for Wii.

I'm actually doing something along those lines now. The review should be up tomorrow morning, and I'm giving the warning now that I'm coming away from it a tad disappointed, but it is still a good game overall.

As far as I know, online is just exhibition, but I'll double check.

I've never played a Madden game before. To be honest never been that big on football games at all but this Franchise mode seems interesting. Though I have been thinking of forcing myself to learn more about the game. I pretty much just know the basics for the most part even then I'm iffy on that. Maybe this type of game could help with that. Or maybe not?