This week we examine Madden's cartoony art style, why it happened, and what improvements are being made.

The biggest noticeable change from Madden NFL 09 to Madden NFL 10 was the drastic difference in art style. Madden NFL 09's art design was the same PlayStation 2-originated graphics that had been in Madden games for nearly 10 years, while Madden NFL 10's graphics were new and stylized.

"If you look through year after year, [the graphical style] has largely stayed the same. There haven't been any huge improvements," said Tim Spangler, the game's Art Director. "Instead of doing the same old same old, [we wanted to] create something that can only be found here, that's made specifically for the Wii."

Spangler is no stranger to the old art style. He has been working on the series since the early 2000s, and it is likely that he pushed for this new art style for those very reasons. The seeds for Madden NFL 10's art style seemed to begin in a 2008 Olympics commercial that starred Yao Ming and LeBron James. "[It had] tons of personality, a lot of appeal, very vibrant, lots of life," Spangler said. "I loved it, and pretty much the whole team loved it."

The team also looked at Team Fortress as a prime example of what they refer to as "stylization of genre". Much like football games, first-person shooters were thought of as being shown and made in a standard graphical style. You have your space marines, your drab landscapes, your sci-fi realism. Team Fortress came in and turned the notion of how a first-person shooter should look on its ear, and it was very well received.

Another key inspiration was Pixar's The Incredibles. "Look at each family member. Their silhouette tells you what they can do and what their ability could be," Spangler said. "We looked at Madden and with the old kind of style, there's really no differentiation between them. You can't tell the difference between a wide receiver and Peyton Manning." 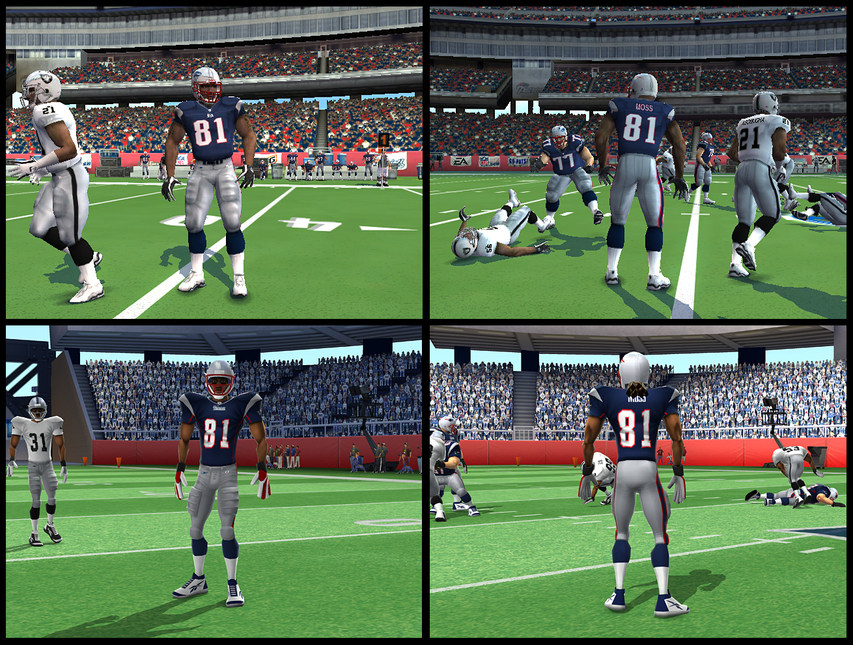 The focus was on bringing out each position's dominant traits through visual cues, as opposed to stats and numbers. With the new art style, wide receivers have big hands and 'fast' legs, Running backs are shorter and have large lower bodies, quarterbacks look heroic with broad shoulders, and linebackers look intimidating with big upper bodies and muscles.

The Pixar inspirations don't stop there, though. Looking at the movie Cars, Spangler noticed how they use realistic stadiums in the races in the popular film. The stadiums in Madden NFL 10 and 11 are based on the real stadiums, but they're stylized, larger-than-life versions. The newly designed stadiums aim to bring the focus to the field, but they don't want to leave out the rest. Even from last year's game to this year's, there have been changes. Lighting has been improved, the brightness has been cranked up, and weather effects have been added. 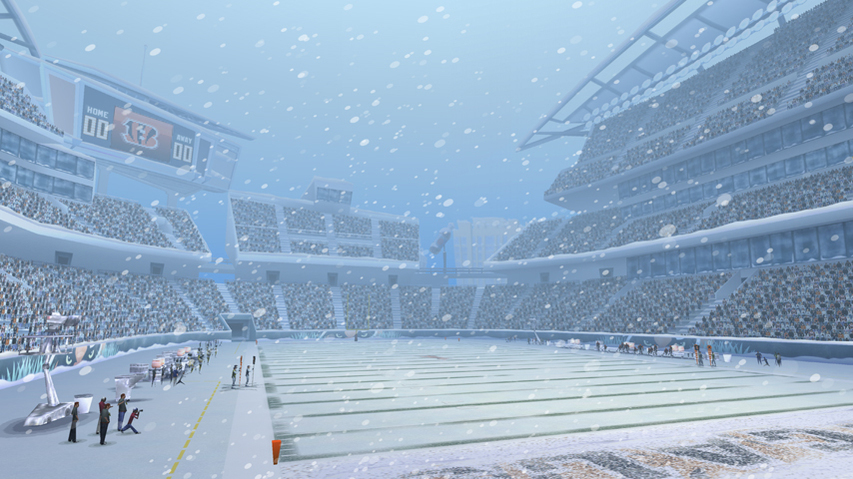 The tundra of the Bengals.

The absence of weather in last year's game occurred due to the same reason that the franchise mode wasn't improved: if it wasn't going to be quality, they weren't going to do it. So, one year into the new art style, the development team decided to make the weather look just like the rest of the game.

Their goal with the weather was to bring a sense of atmosphere to every game, and with the amount of fitting detail used in each weather effect, they seem to have achieved it. Particle effects are in full force, especially in the hyper-stylized, comically-long rain drops. There's also impressive depth fog in the distance that looks like it is right out of Turok on Nintendo 64, but intentionally this time around. 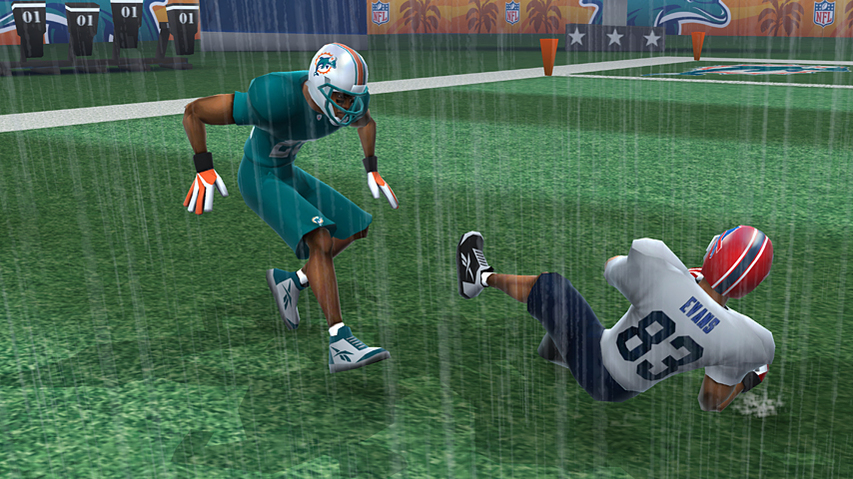 Check out the rain effects.

The rain doesn't just stop with the drops and the fog; it affects gameplay in a tangible manner, such as causing players to splash down onto the ground and slide farther. However, this doesn't disrupt the flow of the game. Instead of having everyone slipping and sliding during gameplay, most of these effects take place after the play has finished.

In snowy conditions, every area of the field that faces the sky - whether it's the stands, the top of the scoreboard, or the end zone - will have snow on it. The idea was to have more immersive weather, which is why there are footprints, cold breath, and more. In snowy conditions, the redesigned crowd even dons official cold weather NFL gear.

The crowds in this year's entry are more detailed than last year's simple blend. With a full cast of characters all wearing or waving official NFL gear in all conditions, they look more like real people as opposed to cardboard cut-outs.

The field and weather conditions affect how players look as well. Uniforms become visually soaked in rain, and specific players will have certain parts of their jersey covered in mud or dirt. Wide receivers will have kick-up on their legs, offensive lineman will be caked in mud since they're in the trenches, and quarterbacks - assuming their offensive line keeps them on their feet - have very little uniform degradation.

The practice jerseys, used in the mini-camp and 5-on-5 modes, are now official models. For example, the Pittsburgh Steelers use their cool gold-colored uniforms instead of the generic colored jersey they wore in the past. Also, the players will sport longer shorts in these modes so they look less like basketball players from the '70s and more like football players today.

Even following a year in which the entire graphical engine was rebuilt entirely, there are still quite a number of improvements made to Madden NFL 11. Next week we'll move past the art style and onto the gameplay, looking at how the game's Wii-centric design joined forces with its art style to make a cohesive experience focusing on great multiplayer for the first time in Madden's long Nintendo life.

Interesting stuff and all, but its the gameplay that matters in the end. THis better have all the features as the other two systems to even consider a buy from me.

You're mistaking this for every other article Neal writes.

You're mistaking this for every other article Neal writes.

Funny thing is, I only own one of the Art Style WiiWare games. Then again, I feverishly downloaded every Art Style game on DSiWare.


Anyway...Madden Wii! We got two more of these articles left, and if you're interested and on the fence, I'm going to try to present everything that I found awesome about last year's game and what is potentially good in this year's game so that way you can look at all of it and be like "yea, I'm into this" or "no, I'll stick to the HD version."

Next week's will be about the Wii-centric Design, and the final week will be all about the new Franchise mode.

I didn't actually have to read this--Neal narrated it on the last Newscast. :-D

I love the graphical style. Is this the year I get a new Madden game? It's entirely possible.

I've gotten two laughs from staff today. If I hadn't gotten them for making fun of a staff member and encouraging staff members to make fun of other staff members, respectively, I'd worry that I'm selling out.