The Last Blade: Beyond the Destiny (Switch eShop) Review Mini

This is the fourth Neo Geo Pocket Color (NGPC) game to arrive on Switch after Gals Fighter, Samurai Shodown(!) 2, and King of Fighters R-2. I didn’t play—or review—the Samurai Shodown entry because that series requires a degree of precision that I’m not fond of. Interestingly, this new entry, The Last Blade: Beyond the Destiny, occupies something of a middle ground between the free-wheeling improv of KOF and the precision of Shodown. It’s a good time, although these Neo Geo Pocket Color fighters are starting to blend together. 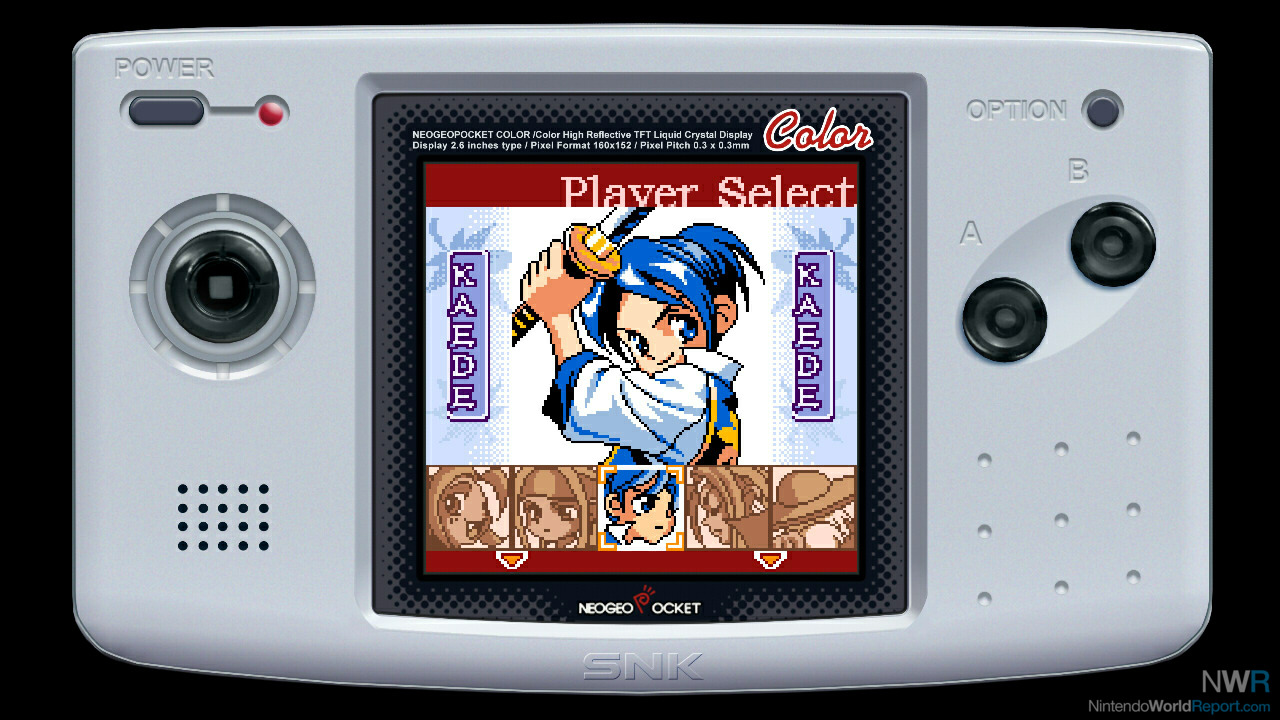 The Last Blade is a weapons-based fighter with a strong emphasis on parries, although they’re not as important as the instruction manual would lead you to believe. This game isn’t as fast as something like KOF or Gals Fighter, and you have to be a bit more cognizant of your attack ranges. I’m most impressed by how different every character feels. As such, every one takes a little bit of getting used to, but that’s what the Training Mode is for. Characters can choose between two “builds:” Speed and Power, which determines the kinds of attacks and specials you can pull off. Speed is more combo-friendly, and allows you to build to larger specials while Power gives you more attack power overall but fewer options.

I found Speed builds harder to use, as the Switch’s stick and d-pad are a little looser than I’d like. As in KOF-R2, lightly tapping a button vs. holding the button down results in different attacks, but in the heat of the moment, it’s not a perfect system. I would have preferred that “light” and “heavy” attacks utilized different buttons on the Switch, so all four face buttons would be in play (a la Primal Rage), but maybe that’s more than this emulator is capable of achieving.

You’ll notice that winning matches bestows points that can be spent on “scrolls” from the main menu’s “Gallery” option. Most of the scrolls are filler material, like character profiles and endings, but occasionally you’ll unlock new characters (try buying both of each character’s ending scrolls), and there are also two weird minigames to try and a code you can enter (the Internet exists) to unlock a third build type.

With all the unlocks, The Last Blade provides a more robust experience than Gals Fighter or KOF R-2, but you have to want it: grinding through the story mode repeatedly in order to earn currency to buy scrolls. I found the game more forgiving (or at least “less cheap”) on normal difficulty than either of its predecessors. Story Mode is also quite short, perhaps because they expect you to run through it so often.

The usual bells and whistles are here, including a digitized manual, different NGPC skins, and a rewind feature. As in the previous games, there’s a distinct lack of a moves list, so you’ll have to resort to repeatedly opening the manual, writing things down, or going to GameFAQs. Being able to play with a friend on a single system is nice, though, although The Last Blade won’t give you the multiplayer mileage than Smash Bros. does. The Last Blade is fun, and another good NGPC game to add to your list.

It's great that they show the system itself while playing. That's probably closer than many of the people playing the game will ever get to a NGPC. It was a system that intrigued me, but didn't buy when it was out.

I noticed that the three NGPC games you've reviewed so far scored a 7.5. In a way, I guess that's emblematic of the whole system. Good enough to be worth playing/having. But not so great that the system could break out of its niche. Perhaps if it had had more time...

It'd be nice if SNK would release NGPC games that aren't fighting games (do those exist?). Apart from the individual bells and whistles, these three games feel very similar, and not having a moves list is...becoming increasingly frustrating. I'm glad I'm able to experience a handheld that I completely missed, but maybe there just wasn't much variety?

As the resident corporate defender, I'll come to the NGPC's aid in this time of need!
Sure the system was mostly handheld versions of SNK's many fighting franchises, along with casino and Pachislot simulators once Aruze bought SNK... But it's not devoid of other stuff.

The problem I fear is probably down to rights... Card Fighters Clash and the Mega Man game require Capcom to play nice, CoolBoarders is owned by Sony, and Sega-Sammy worked on a lot of games for the system including a Sonic title and some RPGs.
Square-Enix already doesn't care about Ogre Battle, so they'll never translate Gaiden. Taito and Data East are basically holding companies who I doubt remember their niche Bubble Bobble/Magical Drop releases.

The most interesting game on the system, Faselei, belongs to a defunct spin-off of Atlus, and the Dark Arms rights are still with Aruze... That just leaves SNK's own fighting games, two Metal Slug entries, and some sports games as easy ports.