There’s a whole host of handhelds that I never experienced but wish I had, things like the Atari Lynx, Wonderswan Color, and yes, even the Nokia N-Gage. One of the more obscure handhelds on the market was the NeoGeo Pocket Color, a 16-bit system launched in 1999 that failed immediately due to the strength of the Game Boy Color, the Pokemon series, and anticipation of the 32-bit Game Boy Advance. It was SNK’s last console before going bankrupt in 2001 (SNK has a wild history, ya’ll). The system itself was praised by the few people who actually played it, and it included a large number of well-received fighters, including SNK vs. Capcom: Match of the Millenium and SNK Gals’ Fighter. The latter just saw release on the Switch, and I hope it’s a sign of things to come.

You may recognize Gals’ Fighter as the prequel to SNK Heroines: Tag Team Frenzy, a Switch game that I enjoyed but it needed more content apart from DLC characters that somehow did not include Angel.* As my introduction to the NeoGeo Pocket Color, SNK Gals’ Fighter is a trip and surprisingly enjoyable. It’s not perfect, but we’ll get to that.

The characters—all women—are pulled from a range of SNK fighting franchises and are drawn in the same Chibi style of other NeoGeo Pocket fighters like King of Fighters R-1 & R-2. Eight are immediately selectable, and three are unlockable. The graphics are colorful and the sprite animations are, quite frankly, amazing considering the hardware and character design limitations. The way limbs temporarily embiggen reminds me a bit of Battletoads (in a good way). Specials attacks and super attacks are performed using complex directional inputs as there are only two attack buttons.

The gameplay modes are pretty standard: Q.O.F. mode (get it?) is basically the arcade mode. There’s local two-player vs., which is a huge plus (although read on). There’s a standard training mode, gallery of items you’ve won, and a good number of options for a handheld fighter, including difficulty and movement speed.

You will sometimes win items during matches. These can be equipped at the beginning of a round of Q.O.F.; some will help you out but most don’t have any measurable effect. Exactly how you unlock characters is a matter of some debate. Every online FAQ has a different opinion (some of which are contradictory). For me, it’s been largely random. At one point, one of the bonus characters challenged me to a fight (Smash Bros. style) but after beating her, she wasn’t on the character select screen. After taking a few more girls through QOF mode, she suddenly appeared. I don’t know if that’s a bug or what. 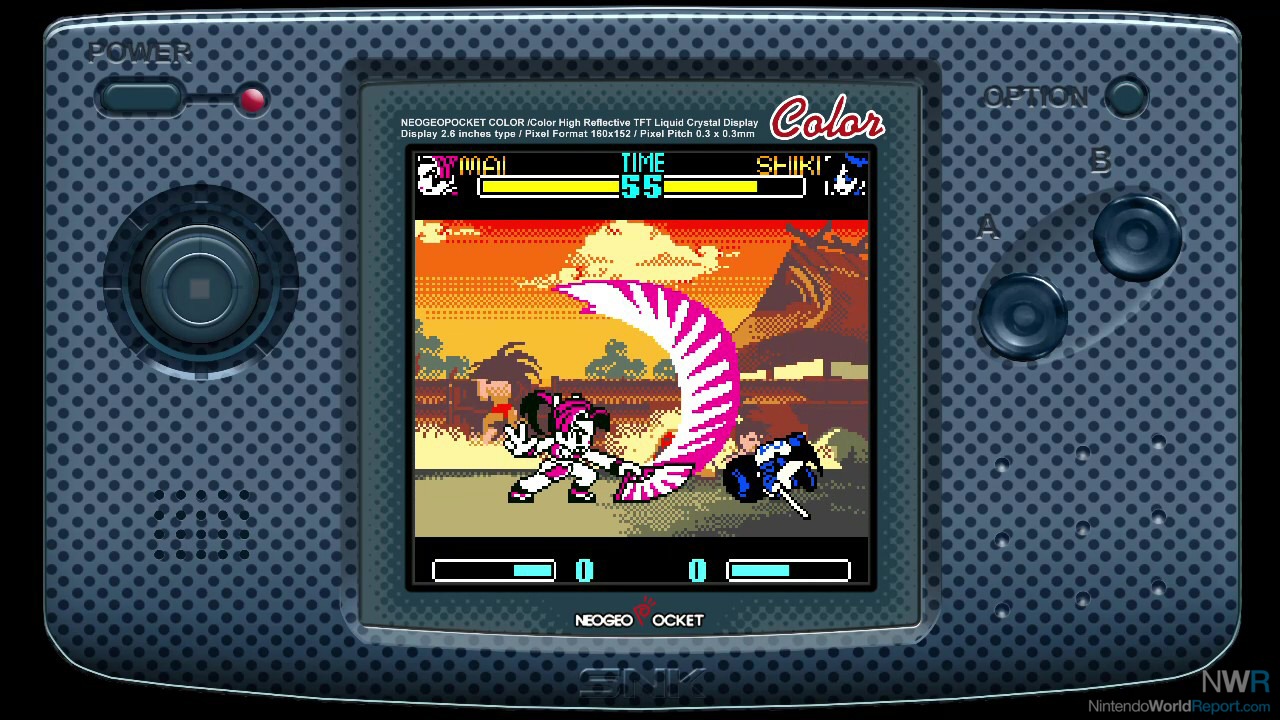 Gals’ Fighter is maybe a little too KOF for its own good when it comes to pulling off special and super attacks, though. Half circles and quarter circles are unusually tough to pull off with any consistency on the somewhat loose left stick of the Pro Controller or undersized sticks of the Joy-Cons. I cannot recommend playing 2-player vs. with Joy-Cons. Maybe I just need to git gud, but I’ve not been all that impressed by Switch fighters that demand KOF or Street Fighter inputs for attacks. These things need an actual arcade stick, and I continue to be gobsmacked that nobody’s made one yet. I’m also annoyed that CPU opponents, even at the lower difficulty levels, block every super attack unless it’s tacked onto the end of a combo, which is as much luck as skill due to the control stick issue. This problem would be remedied to some degree by allowing players to map super attacks (each character has three) to the X, Y, or shoulder buttons. Alas, this option is unavailable.

I wondered what the NeoGeo Pocket Color used as a stick, and I found out it’s a “clicky stick,” eight-directional D-pad, which I kind of wish the Switch had because that sounds better.

Apart from that, SNK Gals’ Fighter is a fantastic little game. There are lots of overlay options as well: you can toggle different screen frames, zoom in or out, swap between two filters, change the button inputs, reset the game into Japanese or English, view the game manual (which you’ll want to read), and there’s even a rewind feature. I hope that SNK continues releasing NeoGeo Pocket Color games on the Switch so those of us who missed out on that short-lived handheld can experience them for the first time.

*You had ONE JOB.

Hori made a RAP 5 variant that works on the Switch.