After playing and enjoying SNK Gals Fighter for Switch a few months ago, I was hoping that SNK would continue to bring ports of NeoGeo Pocket Color games to the platform, as that’s a system I’d never experienced. Turns out somebody up there likes me, and two more SNK handheld fighters have been released: King of Fighters R-2 and Samurai Shodown! 2. Since my knowledge of the latter is rudimentary at best, I was more excited to try the former.

At its core, King of Fighters R-2 is essentially similar to Gals Fighter, although it feels like a more fully-formed experience. Here, there are fourteen characters to choose from arranged in four teams (the two last characters can be recruited to a custom team). You can unlock alternate versions of most of the fighters, as well—although they don’t differ strongly in terms of spritework or moveset. I will note right off the bat that unlocks are randomized but seem to happen with greater frequency than they do in Gals Fighter, a game that doesn’t seem to understand when characters are unlocked.

King of Fighters R-2 gives you two different arcade mode options: one-on-one or three-person team. Both are quite fun, although I found the multiple combatant excursions ultimately more enjoyable. Interestingly, there are two modes, “Extra” and “Advanced,” which really just delineates how your power meter is built up and spent. Despite its name, I felt that “Advanced,” which gives you more options, was the way to go. 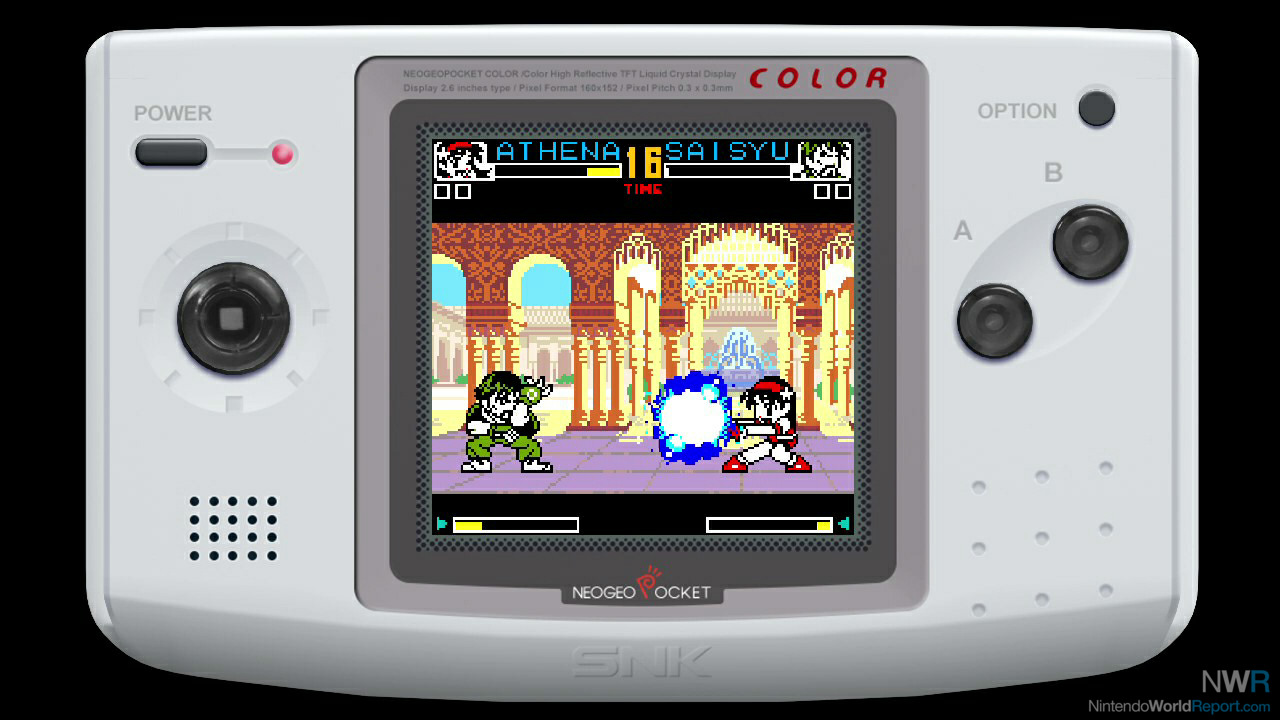 Controls are a little finicky, as they were in Gals Fighter, but I feel like they’re better here overall. There’s still not a moves list, so you’ll have to pull up GameFaqs to see everyone’s attacks, which is a bummer but probably can’t be helped. I’m not sure if this feature was present in Gals Fighter, but in R-2, SNK made up for the lack of four attack buttons by differentiating between button taps and longer presses, so each fighter actually has four basic attacks, which is cool. For special attacks, holding down the final directional input while pressing A or B is also helpful.

King of Fighters R-2 introduces “Skills,” and these are unlocked through random chance and can be applied to a chosen character in “Maker” mode, which is essentially R-2’s version of a “Create a Character.” You then take that character through a traditional arcade mode. You’ll have to turn the difficulty up to Normal or Hard to actually unlock any skills, however. Doing so, however, will activate the typical SNK final boss cheapness, so you’ll be thanking your lucky stars for the ability to rewind when the boss starts reading your inputs.

There’s training mode as well, and a few options available to tweak your experience. The NeoGeo Pocket Color overlay is still present and remains charming. You can still access Versus mode on a single Switch, which is great. Back in 1999, R-2 players could connect their NeoGeo Pocket Color to King of Fighters: Dream Match ’99 on Dreamcast to unlock a picture gallery in the latter. It would’ve been cool to see that picture gallery here, but that’s probably outside the scope of this particular Virtual Console. I enjoyed King of Fighters R-2, mostly for historical purposes. It’s interesting to see KOF gameplay shrunken down and still very playable, and the Chibi aesthetic works, somehow. Samurai Shodown isn’t for me, but I sure hope that this series continues.