Not a shattered mess, but certainly a lack of vision....

The heavy hitters (and Watch Dogs on Wii U) are in full force on Japan’s eShop this week....

Lead Designer Mat Kraemer discusses the 3DS version of Sonic Boom with us....

Nintendo could be highlighting more 3DS software in their booth this year than the last two years combined....

One of the showrunners of the upcoming Sonic Boom TV series Evan Baily talks with us about preparing for the show, exchanging ideas with game developer Big Red Rutton, and more....

Watch a ton of footage from the 3DS version of Sonic Boom. Also, some Splatoon with direct feed audio....

It's another big show as Karl joins to preview the telethon and discuss unreleased games, new games, old games, and sleeping.... 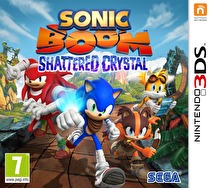