Everything old is old again in Mario's silver anniversary package....

Even more Super Mario Bros. memories from our staff....

We share our thoughts and memories of Super Mario Bros. in honor of the 30th Anniversary of the game....


Mario Does Not Wear Suits; He Transforms

According to Nintendo, Mario transforms into his outfits, he doesn't wear them....

The NWR staff reminisce about their favorite SNES memories....

We cheated, but hey, it's *technically* only one game cartridge....

Pedro looks through the special edition version of the classic SNES game....

The Rairdin brothers get technical about video game music...

Nathan and Karl join Greg and James to fill out their Wii Report Cards.... 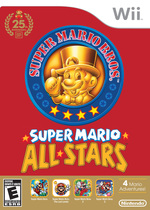