I was struggling to draft this as a traditional review, which usually means the FAQ format is a better fit; it is, so here we go.

First of all, hello. Second, I can hardly believe it either, but yes, the long-awaited sequel to Super Meat Boy Forever is finally here. As you may or may not know, it was announced way back in 2014 and began its life as a mobile version of Super Meat Boy, but after Edmund McMillen left Team Meat to pursue other projects, the game was kind of in limbo until 2017, when development restarted. And now, at the bitter end of 2020, it’s ready for prime-time.

You liked the first game, right?

Man, I love the first game to death. I reviewed it when it splattered onto the Switch back in 2018 and I still revisit it from time to time to try and beat stages that I couldn’t back then. Super Meat Boy is agonizingly hard at times, but it’s always fair, and the mechanics are perfectly splendid.

...was that a Haunting of Bly Manor reference?

Yeah, sorry, my wife says it all the time now.

Is the sequel just the same game, but new levels?

In fact, it’s quite different. You can tell the game had mobile roots, because it’s an auto-runner.

Let me stop you right there.

You mean like Robot Unicorn Attack and Jetpack Joyride?

No no, it’s not that kind of auto-runner. This one has more things to do than just jump or move up and down to avoid obstacles. Sometimes you have to wall jump or punch things or slide. And this one has actual level design! Of a sort.

What do you mean by that?

The levels are procedurally generated. 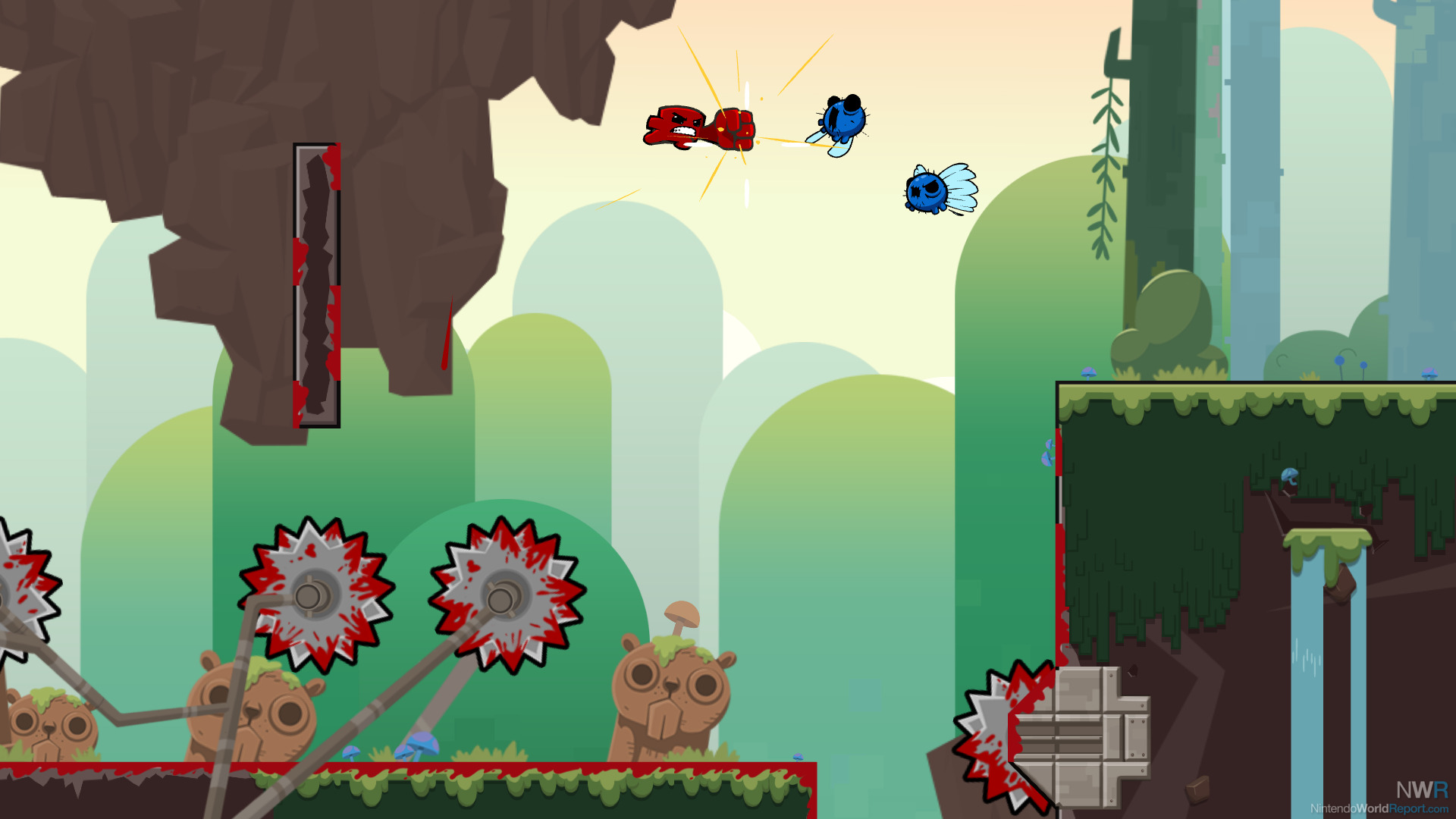 Hey, I was skeptical too, but you’d be shocked at how well the components slot together. Each stage is clearly loaded with specific “chunks” that are strewn together, so each individual chunk works exactly as intended. You’re never going to come across a random buzzsaw menagerie that’s cobbled together in such a way that it’s impossible to get through. It’s not that kind of procedural generation. This is actually really cool and super impressive. Plus, although any given Forever stage is much longer than a typical SMB 1.0 stage, there’s a checkpoint before every “chunk” of that stage, so when you inevitably die, you won’t be sent back very far. That said, there are certain chunks that last a bit too long and repeating them dozens of times can get frustrating.

How do Meat Boy’s new moves factor into this?

Super Meat Boy--and Bandage Girl, who is playable from the start--have the jump and wall-slide from the first game, but can now do an air-punch/dash, a crouch/slide, and a dive. The air punch extends the length of your jump and can also punch enemies, the crouch/slide lets you duck beneath obstacles and knock out ground-based enemies, and the dive lets you navigate tight downward paths. Often, all of these abilities will be combined to create some impressive feats of platforming prowess.

And that’s not all--most stages have at least one new mechanic to tinker with, from movable walls to items that let you air-dash backwards, or dimension-hopping warp portals. Most of the new things are one-and-done, so they don’t overstay their welcome. And then there are the boss fights.

Ooh, I remember the boss fights being hard but pretty doable in Super Meat Boy 1.0.

They’re tougher overall here. For the most part, they rely on your ability to (1) figure out how to do anything; and (2) get into a set rhythm and never screw up, which is a tall order as some of these boss fights go on quite a while. The final boss (before the credits, anyway) almost made me quit the game; it required such precision and perfect timing that I was just worn out by the end. Usually, defeating a difficult boss gives you a great sense of accomplishment, but I just felt like Team Meat was being mean-spirited here. I died 284 times on the final boss. 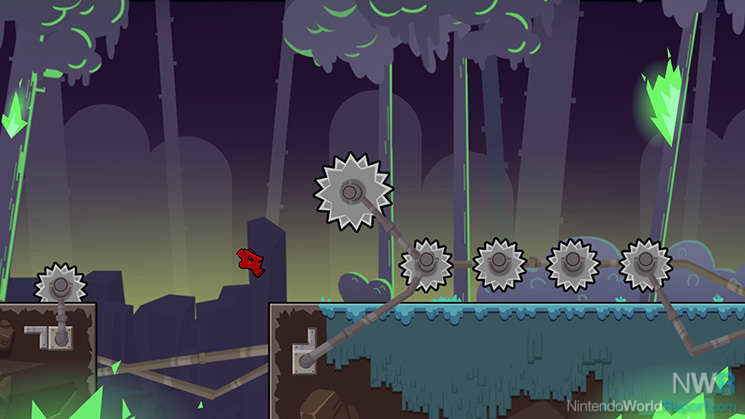 No man, screw that. I subscribe to the Jonny Metts theory of game difficulty: there’s a difference between dying but learning something and dying because you didn’t press the buttons in an incredibly specific sequence with unreasonably good timing. If the player, who is usually very good at Meat Boy, is dying 284 times on your final boss, something’s wrong. Furthermore, so many of these challenge chunks throw the sort of “gotcha” crap at the very end that they become insulting. I just survived a ridiculous platform sequence with amazing timing and then I’m killed because you throw an unexpected enemy or buzzsaw at the very end? Basically, go back and read my review of Runner 3--it was written pre-patch, and that game had many of the same issues that Super Meat Boy Forever does. Despite the inventive procedural generation and good (overall) play mechanics, this game is just exhausting. It doesn’t respect your time.

It’s going to come down to how much patience you have for these sort of “masochism” platformers.

Are there a wealth of unlockable indy characters?

There’s a wealth of unlockable characters, but they’re all Meat Boy-specific, and they require you to collect pacifiers in addition to completing specific warp zones, sometimes by hitting certain goals, few of which are spelled out. Although to the surprise of nobody, the Internet already has tutorials about unlocking characters. And from what I’ve seen, none of the characters have unique abilities; there is no Forever version of Ogma, the double-jumping character in Super Meat Boy 1.0. I suspect that’s because unique abilities would screw up the tightly-designed obstacle courses that Team Meat has put together, so if you want to play as Dr. Fetus (spoiler?), go nuts, but it’s just an aesthetic choice. 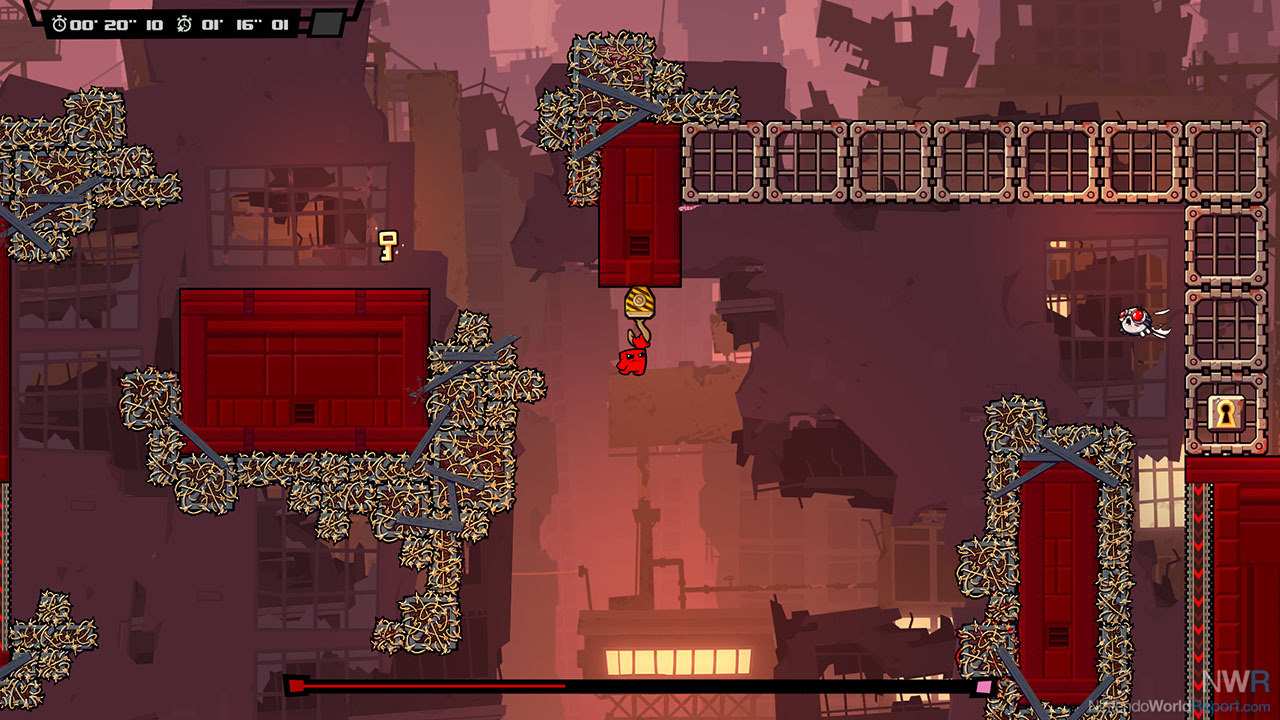 I will say that when you do manage to find warp zones (watch for glitchy effects during a stage--it's nearby), they’re typically extremely inventive and surprising. They’re not just Meat Boy levels with retro graphics; they’re entirely different games, or plays on existing games, like a certain digitized fighting game or Mode 7 racing game. Similarly, the cutscenes in Super Meat Boy Forever are wonderful, well-animated, and often quite funny. Each level has an intro cutscene that is a parody of something--the intro cutscene is a parody of Super Mario RPG.

Is there still a Light World and a Dark World?

Yep, and the Dark World is still harder (and tends to have more pacifiers, of course).

This is definitely one of those “your mileage may vary” kind of reviews; your enjoyment of Super Meat Boy Forever will be determined entirely by your particular enjoyment of masochistic platformers. If you played Super Meat Boy 1.0 and thought “man, I wish this were way harder,” Forever may be just what you’re looking for.

I really like this style of review, thanks Zach!

I'm glad you do! I go to this format when a traditional writeup isn't coming together.

This style is pretty much how you would ask a friend or acquaintance if a game is worth the time.

I'm not one for masocore games at all, but I hope others out there are having fun.