This loving Tribute tribute wears its inspirations on its sleeves but manages to find its own identity.

Once I found out that Panzer Paladin was developed by Tribute Games, who were also responsible for my beloved Mercenary Kings, I figured I’d be in for a good time, and indeed, it does not disappoint. Here, players take control of a rescue android named Flame who pilots a big mech called GRIT. The game’s story mimics an anime from the ‘80s—including sometimes questionable English—and concerns a massive hoard of demonic invaders intent on taking over Earth, and it’s up to Flame and GRIT to kick their asses. The story—told through cutscenes—is entirely too brief and I wound up wishing there was more, but it’s always charming.

To give you some idea of what Panzer Paladin is like, take the level selection and general level design of Mega Man, the sword combat of Zelda II, and the dual role of Blaster Master. That’s the basic recipe, but like the Darksiders series, Panzer Paladin successfully weaves these inspirations into something unique. Our daring duo travel to countries all over the world to halt the demonic threat, each of which is lorded over by a boss. GRIT doesn’t have a gun of any kind, but attacks with comically large melee weapons which are dropped by enemies or found in each level. There are a dizzying array of armaments, many of which reflect the areas they’re found in. Hockey sticks in Canada, katanas in Japan, macuahuitl clubs in Mexico, etc. You’ll also find frying pans, chainsaws, and massive skull maces. When you defeat a boss, they’ll drop their unique weapons, too. 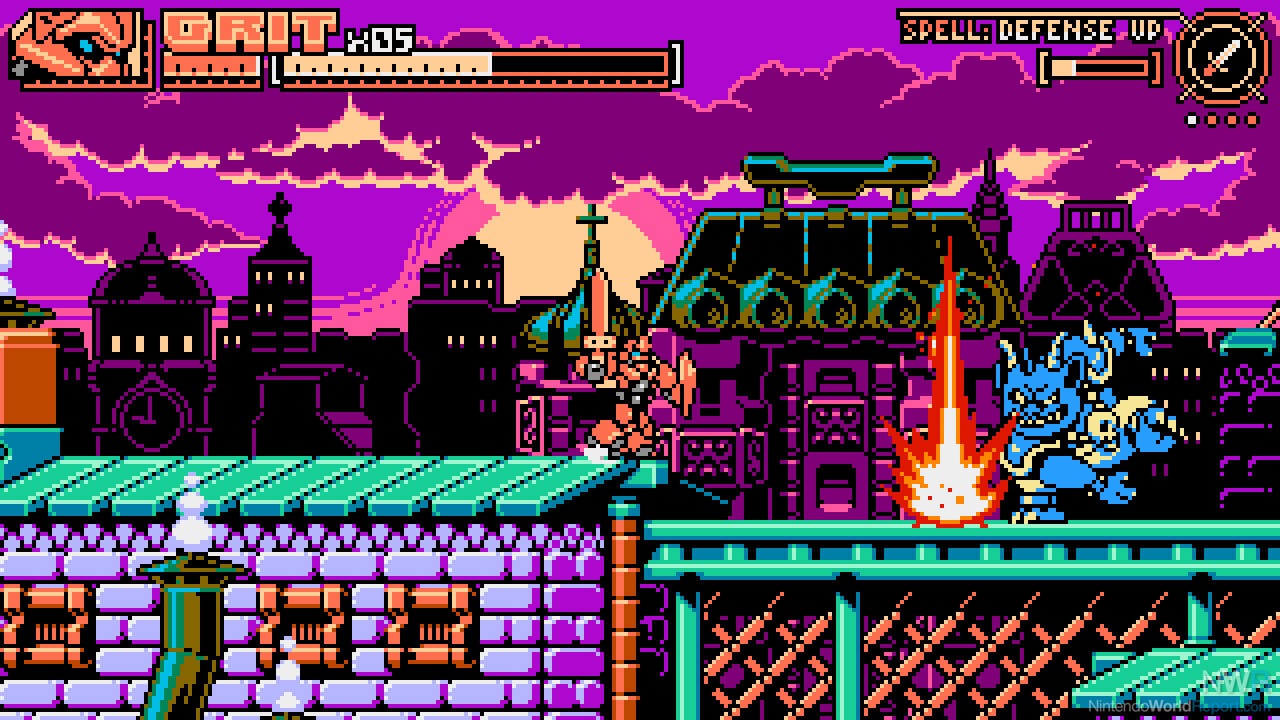 Every weapon, however, has a durability rating—hitting enemies or breaking walls slowly decreases that durability, and the weapon will eventually break. The twist is that voluntarily breaking a weapon before it’s destroyed (by holding ZL + ZR) will cast a spell that will temporarily benefit you in some way. There are fourteen spells total, and every weapon has one. Some of these spells are passive buffs, but others can heal you, improve your next weapon’s durability, allow you to fire a Zelda-like energy ball from your next weapon, or even give you wings!

These spells are important for your survival, especially the healing spells, because enemies don’t drop health pickups. You can find health-restoring energy tanks in each stage, but they’re very rare and must be utilized by Flame while outside of GRIT.

In addition, GRIT’s swordfighting style is similar to Link’s in Zelda II. GRIT has an omnipresent shield which will repel many attacks, but you have to match your enemy’s high or low gambits. It’s unfortunately not always clear—I found some enemy telegraphing animations to be a bit too similar, but it’s not a big deal. Most enemies who engage in swordfighting also have a shield, and GRIT will also have to attack high or low to deal with them. GRIT can also use an upward jab and a down-thrust. The upward jab is also functionally your double jump. I was having a tough time with some of the platforming until I realized this. GRIT’s standard jump has about the same range and required precision as the old-style Castlevania games, but using the upward jab is a huge help. 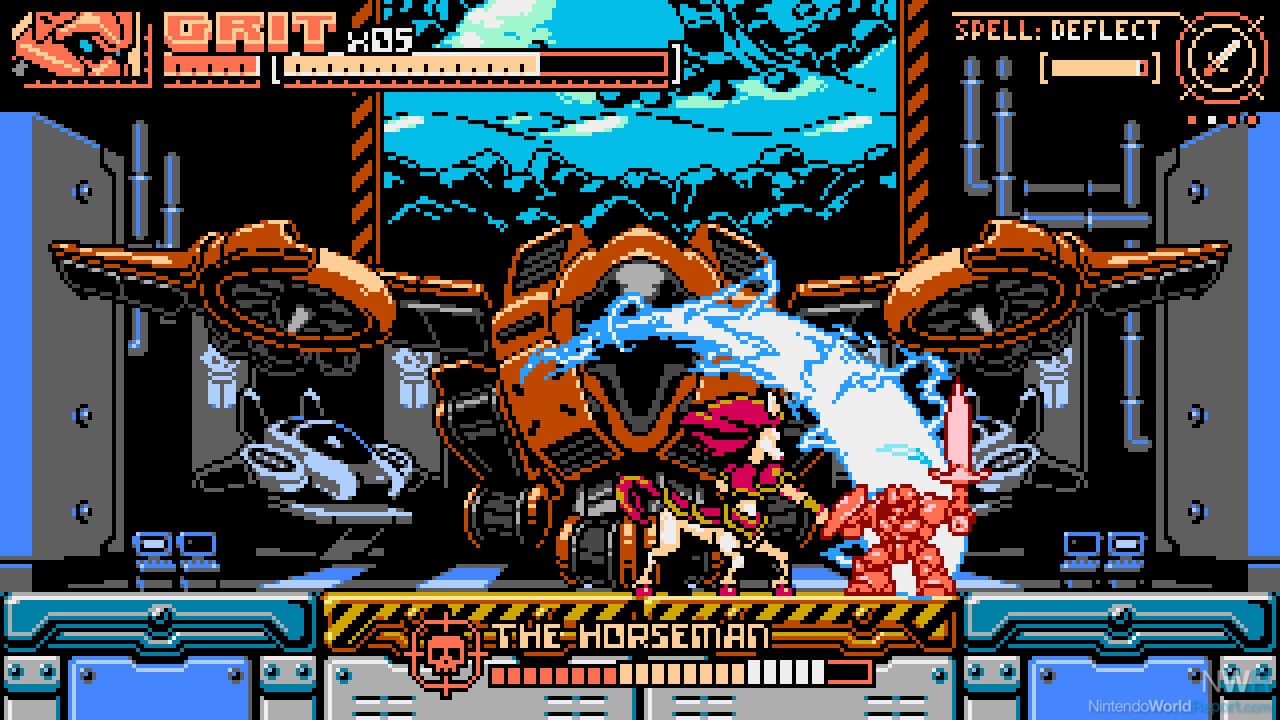 Finally, Flame will occasionally have to eject from GRIT to explore areas that GRIT cannot fit through. Luckily, she’ll always eventually come across a teleportation pad that will summon GRIT to her. Despite her small stature, Flame is no slouch. She can jump just as high as GRIT, has her own health bar, and wields a long-range energy whip that doubles as a grappling hook. If GRIT is disabled via enemy or boss attacks, Flame will pop out and try to avenge her fallen comrade. I’ve finished off three bosses using Flame! Her Achilles’ heel is spikes, which merely damage GRIT but kill Flame outright.

I will say that even on Normal difficulty, Panzer Paladin is a tough game, especially early when your health has not been upgraded. In between levels, you can sacrifice saved weapons in a laboratory to enhance GRIT’s health. Until you start doing that, however, expect to rely heavily on healing spells, especially during boss fights. You can, however, toggle the difficulty on the stage select screen. The bosses are wonderfully diverse, deliciously metal, and each battle is completely unique, but expect some to put up a tougher fight than others. I also want to highlight the game’s music, which is generally excellent and, for some reason, brings to mind the score from Bionic Command: Elite Forces.

Outside of the game proper, Panzer Paladin offers some interesting bonuses. You can toggle a screen filter that mimics a CRT display, and even a curved CRT display, which is actually how I prefer to play it. There’s a super cool Blacksmith mode where you can design your own weapons which will then be found during the game. There’s a Speedrun mode, in which each level has its own leaderboard (you can even activate a ghost). Beating the story unlocks an interesting version of New Game+ in which the levels designs change pretty significantly, and Tournament Mode, which is essentially a leaderboard-leaning Boss Rush.

I was extremely taken by Panzer Paladin, but I do have some minor gripes. My biggest issue is that the game’s camera occasionally forces you to make some blind drops, a couple of which turned out be bottomless pits. The first part of the final area is the biggest offender here, but there were several times where I just wasn’t sure where I could and could not safely jump. I wish more folks would adopt WayFoward’s Shantae solution for bottomless pits, but here we are. Finally, each level is quite long and while that’s not a bad thing in itself, I wish there were more checkpoints. Checkpoints, by the way, are completely optional (you have to sacrifice a weapon). Each level has one main checkpoint and another one right before the boss fight. It’s always a kick in the teeth to fall in a pit right before the boss fight and have to go all the way back to the checkpoint.

Overall, though, Panzer Paladin is a charming, satisfying platformer that I enjoyed immensely. It even manages to do the impossible: make at least one aspect of Zelda II enjoyable.