One of my favorite character action games of the last few years has been Darksiders (which just hit Switch and John Rairdin reviewed). I didn’t like the sequel quite as much and I have yet to try the latest entry, but Darksiders (which I reviewed on Wii U in 2017) is a real gem. However, I don’t pretend that its gameplay isn’t lifted directly from other, arguably better, franchises. It has the combat of God of War or Devil May Cry, the overworld and dungeons of Ocarina of Time, and a portal gun from Portal. But while the moment-to-moment gameplay is a portmanteau of other games, Darksiders features the amazing art direction and character design of Joe Madureira. Why am I talking about a character action game from 2010 in a review of a JRPG from 2018? Well, Azure Saga: Pathfinder is also a portmanteau of other, better, games but lacks that Joe Madureira spark that sets it apart. It’s not a bad game, it’s just not memorable.

Azure Saga: Pathfinder (even the name is generic) puts you in the role of Synch and his android associate Noid, who are traveling through space trying to find Synch’s father. They’re shot down for reasons I don’t recall and land on a planet inhabited by humans who you’d typically associate with a fantasy setting—knights and archers and kings and mages and whatnot. Lots of armor and cleavage. Synch and Noid need to find minerals that will help repair their ship, and of course these minerals are the subject of a skirmish between the local humans, deer people, and “Hollow” enemies. Hijinks ensue.

Story sequences are conveyed through character portraits with written dialogue. The pictures are quite lovely, although I could’ve done with more individual portraits per character to convey different emotions.

Overworld exploration is Super Mario RPG-esque: each distinct level is made up of an isometric map of varying size. The simplest of environmental puzzles—key finding, switch-pushing, and object-shoving—all feature heavily. Like the character portraits, I was impressed by the attention to detail and the art direction on display in each level, although there are a lot of things like flowers and barrels and whatnot scattered around that require circumvention, so sometimes even the simplest grid-based tile becomes an exercise in tedious pathfinding. I suspect it’s designed this way so as to increase the chances of landing a random encounter. Oh yes, there are random monster encounters in Azure Saga and I’m happy to say that the battle system is more robust than I initially anticipated. Even simple fights go on too long, but at least they’re never boring: You can have three characters per party, and everyone has the usual compliment of standard and special attacks. You can swap characters mid-fight without missing a turn, which is nice. There are three interesting wrinkles: 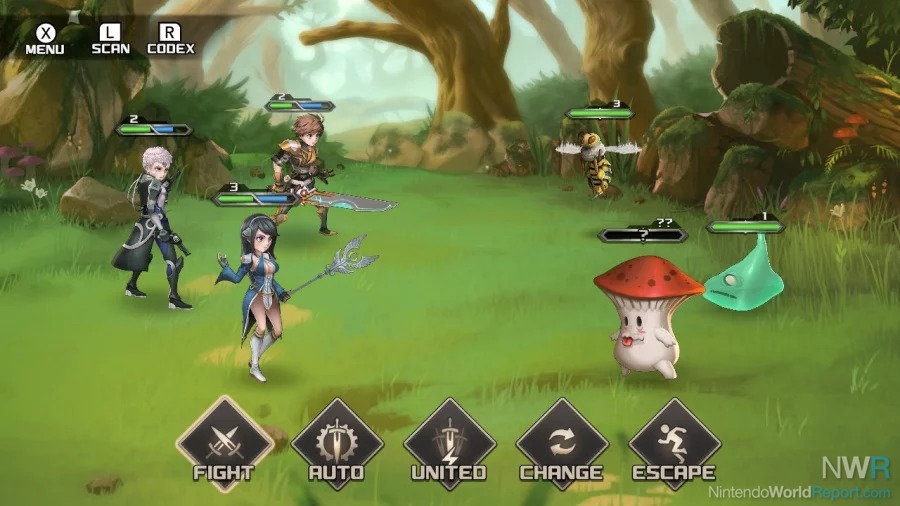 First, you can scan the enemies at any time, which gives you some introductory information about them. Second, if all three party members use specific special attacks in a single turn, they may form a “united” attack that does a lot of damage and usually inflicts status effects on one or more enemies. You’ll find “recipes” throughout the land, but experimentation can also yield results. The unfortunate thing about united attacks is that they tend to cost a lot of mana points per character, but hey, they’re an option. Third, as battles go on, each character slowly builds a “Fury” meter. When fully charged, they can unleash a pretty epic special move that can really turn the tide. Depending on their effects, it may be a good idea to pocket somebody’s Fury attack until you really need it; assuming you haven’t used them, Fury attacks don’t disappear when the battle ends.

Enemies are grouped by class, which includes things like “brute,” “amorphous,” “undead,” or “Hollow.” Each character generally has a Special that’s strong against one of these classes. Even low-level grunt enemies do a surprising amount of damage, which I found to be annoying: I consistently felt under-leveled even though my level was higher than my enemies’ levels. Another annoyance: you'll be seeing palette-swapped enemies constantly.

Part of the problem here is that the game features a very undercooked economy. Battles typically result in very little gold, and while you occasionally find additional gold by checking objects in the environment, it’s extremely rare. As a result, armor (which seems to consist entirely of accessories) becomes prohibitively expensive in the capital city, where you can buy it. Further, the game quickly introduces a crafting system but enemies so rarely drop useful materials that it’s almost a fool’s errand. Stranger still, many crafting recipes simply create other crafting recipes. You’ll be tempted to grind for gold and materials (or experience), but then we get back to the problem of fights taking too long.

And it’s a shame, because there’s one aspect of the equipment system I like: socketing jewels to augment a character’s stats. You can attach rarely-found jewels to a character’s equipped “armor” to give them a modification towards a specific enemy class. Different jewels produce different effects, so it allows, say, Synch—who is good against Hollow enemies—to also be effective against, say, undead monsters.

Azure Saga: Pathfinder is perfectly serviceable, and apart from my frustrations with the economy, there’s a lot to like here. It’s just not something I’m itching to go back to. If you need a JRPG fix for your Switch—and have already been through the boatload of them already available—Azure Saga might scratch that particular itch for you.