The original Darksiders is best remembered for being something of a mash up of elements from several games. You could have labeled it a Zelda game—the first weapon you get is unapologetically the boomerang from Wind Waker (though heavily modified). The combat is reminiscent of God of War or perhaps Devil May Cry. You eventually find a gun that shoots portals. Despite its minor identity crisis, Darksiders was a fantastic game with great art direction, an interesting story, and genuinely challenging dungeons.

Darksiders II builds upon its predecessor’s penchant for gathering gameplay ideas but manages to feel like its own beast. You played as War in Darksiders, but as his brother, Death, in this game. The story takes place more or less concurrently with the original, though where War wandered a post-apocalypse Earth, Death travels to a variety of more mystic places. While basically similar to the first game, Darksiders II expands into other territories that make it a more complex, engaging experience.

Many elements from the original game remain: buying new attacks, finding doodads, traversing environments, and seamless integration of a second weapon type in combat. Like War, Death has magic abilities and a powerful alternate form. He doesn’t find Zelda-esque weapons nearly as often, though there are just as many in total—they’re just spread out over a much longer game. The biggest departure is that Death loves collecting loot. Loot is dropped from every chest you open and most enemies you defeat. Bosses drop rare loot. Loot is divided into equipment classes and broad types like “Enchanted” and “Possessed.” Possessed weapons are particularly cool—you “sacrifice” other loot to power them up.

Each piece of loot has a level and a stat bonus, and it’s up to you find the combination you like most. With each level you gain, you get a skill point you can use to upgrade Death’s Wrath powers or activate new powers from a skill tree. You can even choose to go on quests, finding items for characters and receiving handsome rewards for doing so. Darksiders II has a lot of game to it, which often comes at the expense of the plot. Hours and hours in, and I’m still not sure what’s going on. I can say too many artificial barriers come between Death and his ultimate goal. Well, you can’t activate these stone sentinels until you fix these forges, and you can’t awaken this giant sentinel until you destroy it first, and you can’t go to the Tree of Life without talking to this one guy in the Land of the Dead, who wants some things from Heaven and Hell. Death does a lot of errands for people. It’s that whole “the world is ending, but would you do my laundry?” trope that irritates me in so many video games. Thankfully, fast travel is almost always available from your map screen, which reduces some of the tedium.

Darksiders II was also a good test run for my GamePad. The GamePad displays your equipment menu at all times, in real time, so you don’t have to pause the game to equip new stuff or cycle through broader menu categories. From a practical standpoint, you’re pausing the game anyway since Death is still just standing there on your TV while you make minor GamePad adjustments, so you can’t really change up his equipment in the middle of a fight or in an area that might spawn new enemies (who brutally slay Death while you’re equipping a new Talisman). The GamePad also duplicates any cinema scene shown on TV. The game is also playable on the GamePad by itself, at which point you will have to pause the action to get to your equipment screen.

But the GamePad has its share of unique problems. For one, the game’s intense combat doesn’t feel great on its button layout. I was constantly pressing the wrong face button after adjusting the camera, and the big space between the L and ZL buttons is noticeable and annoying. While on the GamePad, swimming and riding is mapped to the gyroscope, which feels ridiculous and is anything but intuitive. I had a problem mapping Wrath powers to buttons—if there’s a way to do that, the game doesn’t tell you. Instead, I was being forced to tap an icon on the GamePad screen in the middle of combat to activate a magic attack. I always felt like I was just getting by, tolerating the GamePad’s charms. But then I bought a Pro controller and the entire game felt better. Radically better. So much better that I’d suggest playing the game exclusively with a Pro controller. When you use a Pro controller, the game shows the Wrath powers’ button assignments on the screen.

The game also just looks better on a bigger screen. It’s not like it looks bad on the GamePad, but Vigil has created an epic world so full of life and detail that you’ll want to soak it all in. Overworld areas are vast, and dungeons incorporate a number of interesting motifs. The music is also wonderful in its subtlety; there’s a Celtic thread throughout the game’s first third that’s just lovely.

All the DLC released on the PlayStation 3 and Xbox 360 versions is included on the disc here, and there’s a bunch of free bonus equipment left in the main area. I do wonder if the bonus equipment conforms to your level, because it all looked pretty awesome when I picked it up, but was quickly outmoded by equipment I found in the field. Supposedly there’s also Wii U-specific content, but I honestly don’t know if I’ve run into any of it.

Darksiders II’s points of irritation come in its plot and pacing. The game stretches too long, especially given how artificial some of the barriers seem, and it seems like Death is the only one in the entire world who can get anything done. The plot’s central pillar—that “Corruption” is invading the realm—is a tired contrivance, and from what I’ve seen, it may not have a satisfying conclusion. From a gameplay standpoint, the loot system probably works on some primal level for a lot of RPG and World of Warcraft players, but it’s a little too distracting for me. I feel like I spend too much time experimenting with different equipment combinations and feeding Possessed Weapons and selling loot I clearly don’t need. The game also tasks you with keeping track of a lot of questing and shopping. Darksiders II has you visiting different merchants all the time, and although enemies drop gold like rain, you never seem to have a comfortable amount. I bought a Talisman that all but wiped out my funds, and that was after selling a bunch of useless gear.

Despite these problems, Darksiders II is an excellent, lovingly crafted game I wholeheartedly recommend, especially if you liked the first. From a production value perspective, it’s at the top of its class, and my problems with the game are largely personal preference quibbles.  Just like the first, Darksiders II is the Zelda game we never got.

Is it necissary to play the first game?

Well, yes and no. You could probably just read the Wikipedia page and you'd be fine, since they end the same way (no, literally, they end with the same cutscene). Now, the first game is WONDERFUL in terms of gameplay and art direction, so I'd recommend it for those qualities alone, AND you'll get a better idea of what War's been doing this whole time.

Sweet! Looking forward to reading this review, Zach. Glad to see you enjoyed it. I'll totally pick this one up when the price drops a little bit.

Darksiders 2 starts with a big info dump movie that catches you up with the game world and the gist of the first game's plot. The first game doesn't have a lot of important story markers beyond the intro and ending, which are both summarized in the sequel's first cut-scene.

I'm currently playing through Darksiders 1 for the first time (on my PS3). I absolutely love this game. It's basically a combination of Zelda and God of War; the combat has that same heavy, imposing feeling.

If this game can't save THQ, then Saints Row 4 needs to get here much quicker. I would have hoped THQ could survive on their WWE titles alone; they are still popular, right?

"you never seem to have a comfortable amount"

LOL?  Ended up banking over 5 million since the merchants during my playthrough don't have anything worth buying  ::) .

Have to agree with you about the fetch quest--main story.  You play as DEATH but you end up as some lacky's gofer, if I was the developer I would have given Death the power over souls (someone not feeling very talkative--steal their soul and find out everything you'll need to know).

The later stages feel rushed--chests in plain view, easy to get to, and the level design is flat?  Wonder if they had multiple teams making stages because it surely feels that way.

I'm playing through the first game now on PC and I haven't gotten a boomerange yet but  I do have a Scythe.

If you want the first one THQ is doing a Humble Bundle including DarkSiders I. Steam key, No Mac or Linux though.

Wonder if they have seperate keys?  Couple of those games I really dont' need (Just need the Company of Heroes ones),  If so I'll just gifted the other keys to anyone that wants them.

I feel compelled to address your gripes about the gamepad. Mapping the spells and items to buttons was, to me, fairly obvious; you simply drag the desired ability from it's spot on the pad to the blatant abyx wheel shown in the middle of the screen. Also, why where you playing with motion controls on? For me that scheme was not only optional, it was off by default. I'll give you that the shoulder buttons seem too far apart, and that is unfortunate, but the convenience of not having to wait three seconds to get in and out of your menu for map reference, equipment swap, and item management make this the optimal controller in my opinion. But hey, to each his own.

I did drag the ability to the wheel. Nothing happened--it just sprang right back. Glitch, maybe? The gyro controls were also on by default. Another glitch, perhaps?

I guess I may have had the spring back as well, but with a little perseverance it worked easily enough. Idk why your gyro controls where on either, but you of course could have turned them off :P. Definately play the game however you want; I just wanted to point out that the gamepad is far from broken.

Oh, sure. You can definitely play the game competently on the GamePad. I'm just saying that, for me, the Pro Controller was FAR better. 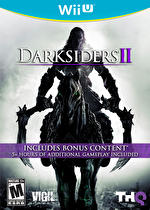