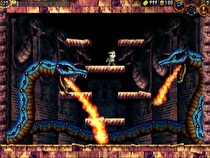 This week's Nintendo Downloads brings us the release of the long time coming La-Mulana, as well as a title each for the 3DS eShop and DSiWare service.

La-Mulana - 1000 Wii Points
This game may have had a rocky past, but it has finally made its way to North America, courtesy of EnjoyUp Games. In this "archaeology action and exploration game" you will take control of Professor Lemeza as you explore temples, avoid traps, and solve puzzles.

Rising Board 3D - $2.99
In this endless runner (think NSMB2's cannon stages), you guide a surf boarding penguin with a penchant for collecting sun points and landing sweet tricks. Sound interesting? Our own Neal Ronaghan certainly thought so, read his review here.

THE "DENPA" MEN: They Came By Wave (demo version) - Free
Use your 3DS camera and search the real world around you for strange creatures known as Denpa Men. Once captured, build a party and take down your enemies in this dungeon RPG from Genius Sonority Inc.. The Japanese release of the demo allowed the player to carry over their save data to the full game, a feature we'll hopefully enjoy here. THE "DENPA" MEN: They Came By Wave will be released next week in the eShop for $9.99.

Retro Pocket - $4.99
Retro Pocket tries to be one thing, very retro. Boasting retro visuals and sound design, Retro Pocket includes eight original LED-style games. Each of the games includes high scores as well as two different gameplay modes. If you pick up the game you can look forward to these games and more: Kung Fu Hero, Whale Escape, Mind Your Head, and Candy Factory.

Woo, finally a new wiiware game to buy.  This'll be my first since cave story.

La Mulana and Retro City Rampage will be two last wiiware games i will buy.

Heck, they might be two last wii games period i will buy.

La Mulana and Retro City Rampage will be two last wiiware games i will buy.

Heck, they might be two last wii games period i will buy.

I really hope Retro City jumps to Wii U shop instead, since they have the HD content ready for PS3 and 360 versions they might as well just use that. I totally want to play that on the gamepad in bed.


btw The Denpa men, is a pretty fun and crazy game. I wonder how the full game is.

Granted, things could have changed since March, but when I talked to the dev, he had no plans to do Wii U because he simply couldn't afford it (and was bummed out by how poorly the Wii Shop was doing). He decided to port it to Vita because Sony sent him a system for free and helped him get going on it.

Videos haven't sold me on Retro City Rampage being a really good game. Maybe it is, but I just can't tell.  I'm keeping some points set aside anyway though. At this point, I'm willing to support it just because it's there. (Not like my entertainment budget is being hurt by the landslide of 3DS releases, eh?)