Why Xenoblade Chronicles X is the Best

Cuz jumping off stuff is fun.

Have you ever spent so much concentrated time with a game that a certain smell, taste, or time of day reminds you of that game? In 2015 when Xenoblade Chronicles X first released, I was living in a small, one bedroom apartment with my wife. It was winter so it was freezing cold outside, but because we lived on the second floor, and my downstairs neighbor liked his unit toasty, our apartment was always extremely warm so we’d turn off our heat and open the window. My wife, despite having never played the original Xenoblade, had enjoyed the story and world so much from watching me play, that I wasn’t allowed to play Xenoblade Chronicles X unless she was watching. We’d get up early, before either of us had to go to work, sit on our couch, breath that crisp winter air from the open window, and binge Xenoblade Chronicles X for as long as we could. To this day when I open a window during the winter my mind races straight to those fond memories of Xenoblade Chronicles X. Few games have such a strong and lasting effect, but Xenoblade Chronicles X’s beautiful world, gripping story, and all but perfect design, are impossible to forget.

Xenoblade Chronicles X understands the psyche of the player. It lets you break long standing rules of game design. In fact it encourages you to. Let me give you an example. What do you want to do when you get to the top of a building or a mountain in a game world? If you didn’t say jump off, you have no soul, but thanks for reading this anyway. There is a basic instinct to break the rules of the real world, to do something we know we wouldn’t do in real life. While most games allow us to act on this instinct, they still punish us through fall damage and a game over. Xenoblade Chronicles X on the other hand encourages you to break the rules and rather than punishing us says “Wow that was fun, I’ll bet you can get even higher with this robot”. Xenoblade Chronicles X’s progression is built around helping you get to more and more hard to reach areas (and then inevitably jumping off of them). This all culminates in the ability to fly anywhere. No areas of the game are ever blocked off, and the ability to fly allows you to approach the world from any angle. As I said, exploration isn’t a feature of Xenoblade Chronicles X, exploration is the point. 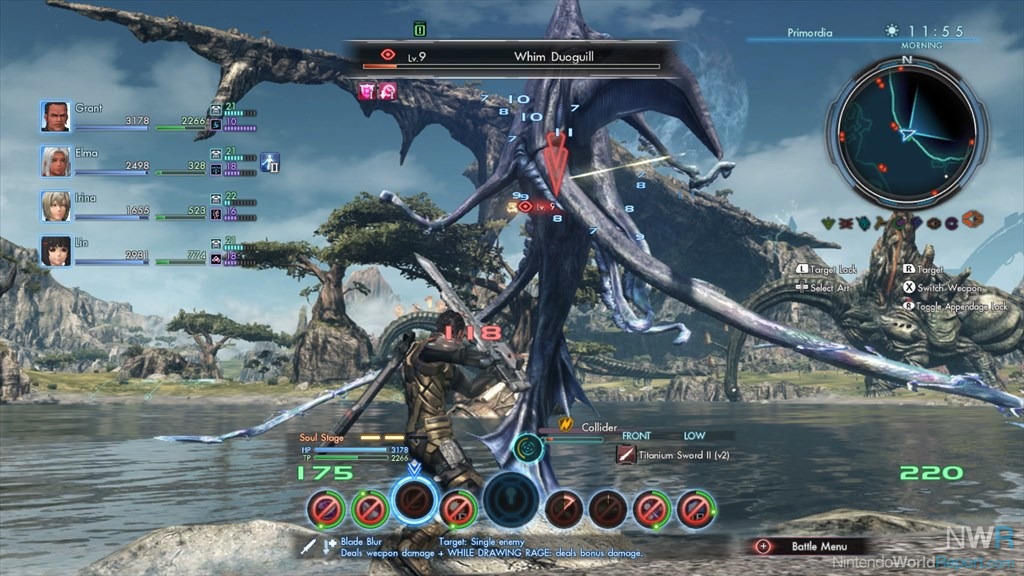 This feeds back into the story progression as well. One of the most common critiques of Xenoblade Chronicles X I heard around its release, was that story missions were gated behind certain side quest progression and world exploration. This made it impossible to run straight through the story of Xenoblade Chronicles X. But what some may see as a flow to take off some points for, I see as the designers casually pushing you towards to real focus of the game. The game actively pushes you away from its primary quest line and out into the world. While now and then I might have to go knock out a quick side quest, in general I was always well past the progress requirements by the time I remembered to return to the main story. The plot of Xenoblade Chronicles X is built around exploring an alien planet, thus so much of the story is told through its environments.

Xenoblade Chronicles X is the best Xenoblade game because it spends less time pulling you into a cutscene to show you how cool the world is, and more time encouraging you to go out and experience that world for yourself. It takes everything great about the original Xenoblade, a rich story, fun systems for enthusiasts, engaging combat, and a beautiful world then turns the focus on the player and their own personal experience within the greater journey.

I agree that X is the best

Unlike the original Xenoblade I actually bothered to finish X.

So I’m loving X - finished it and it is the most compelling for me of the 3 to do the end game stuff in, but I’m now hitting a wall with those stupid Reward Tickets that require the online system to be working for. Any tips for getting those better Skells needed for end game stuff without the Reward Tickets. Baffling that this game has no way of earning those now with online dead :(

... Baffling that this game has no way of earning those now with online dead :(

This is a HUGE negative point for me.
Games that aren't fully playable without online access are hugely disappointing for me.