Tons of 3DS Demos, Devil World on Wii U, Plus More Arrive on the eShop in Japan

The Wii U may be lacking in releases this week, but the 3DS eShop has you covered. 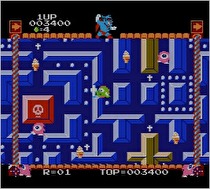 Another week, another batch of downloads on the eShop in Japan. The Nintendo 3DS has a ton of content this week in the form of free demos as well as a handful of reasonably priced downloadable titles. Genres range from action adventure all the way to educational titles - basically, something for everyone. Of course, the Virtual Console is still tossing and turning in its early grave.

The Wii U only has three titles available this week including a demo of an upcoming Doraemon game, The LEGO Movie Videogame and Nintendo’s answer to Pac-Man on the Famicom, Devil World. Originally released in Japan in 1984 (and later in Europe in 1987), Devil World puts players in control of a little green dragon as he goes out on a mission to Devil World. The game is very similar to Pac-Man as it has players collecting dots around the maze. Unlike Pac-Man, though, players have to pick up crosses that are scattered throughout the maze in order to gather them. The cross also gives the cool ability to shoot fireballs at incoming enemies. We spent some time in the most recent episode of the Famicast talking about the game (my new business on the show), so be sure to check that out if you want to hear more about it if you haven’t already. Gamers in Europe and Australia can also pick up the game from both the 3DS and Wii U eShops.

For a complete look at all of the content on both eShops, be sure to check out the round-up below.

Virtual Console
NA (no titles since 5/7)

Fear not folks, the 3DS VC drought is going to end soon...

...because they're giving out Game and Watch Gallery 3 to people who buy Smash Bros and Pokemon OR/AS in Japan.

Hehe. I saw that, Shaymin. I'm almost tempted to buy Pokémon just to get it...even though I wouldn't play it...AND I haven't even come close to beating Pokémon X from last year.