Best of the Wii: Our Top 10 First-Party Wii Games

Wii is home to the best Mario Kart game in the season. 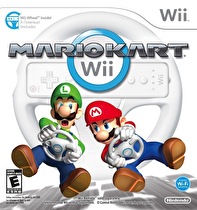 If asked to point to the most exemplary Wii game available, Mario Kart Wii isn't a bad choice. It embodies everything Nintendo marketed the Wii to be. They kept a standard control scheme for the lifelong fans but added the ingenious plastic wheel to draw in non-gamers and youngsters. The game's difficulty is balanced in a way that does not alienate the new players, and doesn't have the offensive level of rubber banding, handicapping, and general AI cheating of some of the previous games in the series. It also features arguably the most robust online mode of any game on the system. These are the reasons why Mario Kart Wii belongs in this top 10, as well as in every Wii owner's collection.

Mario Kart Wii should be extremely grateful to its predecessor on the DS. Nintendo added an online mode to that game, and the experience gained from doing so is evident. Mario Kart Wii allows players to easily jump into matches with random opponents online, create private races for only their friends, or join friends in races with random opponents. Multiple players can also enter online matches from a single console, utilizing the classic split-screen mode. As online matches are completed, players' ratings are adjusted for that extra layer of competition. If you beat a highly rated player in a match, your own rating skyrockets! It's a mode that's hard to put down, and it gives the game a lot of longevity.

The online features aren't the only parts that make this game stand out. Probably the most often overlooked new feature in Mario Kart Wii is the allowed number of karts per race jumping from eight to 12. This increase doesn't create too much chaos, though, as most of the courses in the game are of sufficient scale to allow people to still get out and race. While this addition isn't so obvious in standard races, when you get that many people competing in an online race, it's hard to imagine going back to a smaller crowd.

The most obvious addition the Wii version brought to the series is motorcycles. When selecting a character you can put them in either a kart or a bike, depending on your preference. The control differences between the two types of vehicles really let the player play the way that's best for them. In general, the bikes turn sharply and drift less than the karts. Greg Leahy put it best in his review:

"The different handling is disorienting at first, but with time and practice the merits of the bikes emerge. Slender profiles and superb manoeuvrability can prove invaluable for weaving in between traffic and the ever-numerous track obstacles, and their ability to corner sharply with finesse makes driving the time-honoured karts seem awkward by comparison."

In a lot of ways, the bikes are equal parts "beginner mode" and "advanced mode." Beginners flock to them because they are easy to control. Advanced players use them because their speed and maneuverability make it easier to hold a lead (assuming they don't get smacked around too much trying to get there). Purists still demand the karts, though. Who wants to pop wheelies for speed boosts when you could drift more instead?

Item wise, Mario Kart Wii features two great additions, the Mega Mushroom and the POW Block. Introduced in New Super Mario Bros. for the DS, the Mega Mushroom drastically increases the size of the player, allowing them to squish other racers. This was a perfect item to introduce to the series, as players have been changing size and getting squished (thanks to the lightning bolt) since the original Super Mario Kart. A cool twist to the Mega Mushroom is that, while activated, it also acts as protection from possible lightning bolt attacks. Instead of shrinking to mini, huge players only shrink back down to normal size.

The POW Block is another outstanding addition to the series. Every player ahead of the racer using this item spins out! It's a great equalizer and should have replaced the Blue Shell. Alas, the blue death remains in this game, continuing to be the most controversial thing to ever happen to the series.

The rest of the Mario Kart Wii package is quite strong. Different kart and bike options make it easy to find a race experience for everyone. The tracks are well designed and offer great variation. The classic courses included are some of the best of the entire series. Everything about the game is fun, and the multiplayer keeps people coming back.

If you only own one Mario Kart game, the Wii incarnation is easily your best bet. While it may be missing the co-op play of Double Dash and the cool battle modes of 64, the control options, online multiplayer, and top notch-racing action more than make up for it.

I can safely say this is my favorite Mario Kart so far. I wasn't too much of a fan of MK64, perhaps because I don't have a history of playing it with friends at the time in dorm rooms, and I don't think it has held up well enough to be worth revisiting today. MKDS was plagued by snaking. And MK7's physics throw me off and feels empty with just 8 racers.

I find it almost impossible to get tired of playing MKWii online, at least when with friends or like-minded people. Cheaters bring the enjoyment down, but if you can avoid them, MkWii to me simply has the best selection of tracks and the most fun racing gameplay of the series since the SNES game.

Agh, I seriously forgot about this one, and I'm ashamed. Mario Kart Wii is definitely one of the best games on the Wii and my personal favorite of the series, too... it just streamlines everything, the course selection is fun and varied (Except that Rainbow Road... oh jebas is that hard), and the challenges are great. I have to revise my list now, I think.

I sincerely adore this game. I've probably put more time into this game than anything on the Wii next to Smash Bros.

It's just so much fun with people in the same room AND online. Something no Mario Kart has done for me before (at least the online part). I have faith that Mario Kart Wii U will be epic.

My Favorite Mario Kart. The portable Mario Karts never do it for me. All the rage it took me to unlock everything in Mario Kart Wii made me mad but it was a fun game. Getting hit by 3 blue shells in one race is never fun. But a very enjoyable kart racing game.