Can the real Kunio-kun please stand up? 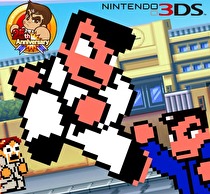 Kunio-kun has taken front stage this week on the eShop, as a new page highlighting all of the previously released Nintendo 3DS Kunio-kun games, including one of this week's Virtual Console titles, appeared today. Here is a look at what is available on the eShop in Japan this week:

Every week, the eShop in Japan usually has some sort of new channel that is showcasing videos from one or more upcoming titles. Surprisingly, this week, it was a bit lacking. However, under the new Kunio-kun channel on the eShop, Nintendo 3DS users have a chance to check out videos highlighting gameplay for every single one of the titles released on the 3DS.

As I mentioned above, the eShop is now host to a special channel specifically geared toward Kunio-kun related games. As it stands right now, Arc System Works, one of the companies currently behind creating games in the series, is a major contributor to the eShop in Japan and has several titles, including four titles for the original Game Boy. The fact that they released a demo for one of their retail games should come as no surprise.

This week, I had a chance to play the demo for Nekketsu Kōha Kuni-kun Special, which was originally known as Renegade in Western markets. This 3DS remake was released in December in Japan and marks the 25th anniversary of the series in Japan. One of our Japan correspondents, Minoru Yamaizumi, had a chance to play the a demo build of the game at Tokyo Game Show last year. From his impressions, the demo that I played on the eShop is different from what he experienced at the Tokyo Game Show and is a bit more limited in scope. The eShop demo has two modes: Mission Mode and Battle Royale. The Mission Mode contains three missions that put you through timed challenges which, for example, have you defeating enemies or collecting a certain amount of coins. The Battle Royale mode is an all out brawl with three other computer-controlled players.

While the demo is unbelievably short, old-school beat-em ups are the kind of games that are meant to played more than once. The full retail game features both download play and local multiplayer for up to four other people which can make the battle royale mode into a Smash Bros./Jump Super/All Stars kind of experience. Visually, Kunio-kun's latest outing is extremely faithful to the series, which I personally like but can see how it does not appeal to everyone out there. The 3D elements are not overbearing and are subtly worked into the experience. For a free demo with the maximum of 30 plays, this is a great way to waste some time and to celebrate Kunio-kun's 25th birthday. If you have a Japanese 3DS, get downloading!