A great game is still a great game, even if it's a two-year-old port.

Every so often, I have a weird sensation where my feelings are the opposite of a lot of people I know and talk to. The last time it happened with games that I can think of was The Legend of Zelda: Ocarina of Time 3D. Before the 3DS release, I hadn't played the game in a decade. I was stoked for the re-release, especially since it was on a portable and featured graphical enhancements. I'm a sucker for playing games I love with a new sheen or on a new style of platform.

That makes it weird that I'm honestly really excited for Donkey Kong Country Returns 3D. I played the original, got more than halfway through it, but something just didn't totally click for me. As dumb as it sounds, the waggle did hurt the experience for me. And it came out at the time when the Wii stopped being the center of my entertainment experience (which was still four years later than when it stopped being the center for most people). It's because of feeling that sensation that I understand why Nintendo might want to re-release that game, which still sold a whole lot, to a new audience on an active platform. Despite owning the game, I am a part of that audience. I played a few hours of it, but I didn't complete. Donkey Kong Country Returns didn't envelop me like a lot of other games have. 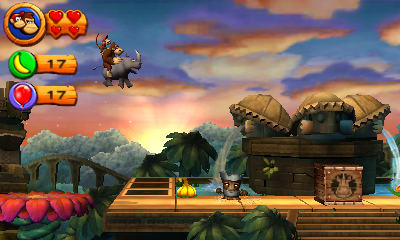 From all the praise it garnered (especially from our own Andy Goergen), I'm surprised it didn't click with me. At this point, playing the Wii version would involve prying it from my 5-year-old niece's fingers, which is something I have no intention of doing (she also totally bogarted my copy of Scribblenauts Unlimited, and if her father has any say in it, might be playing my copies of Mario U and Sonic Racing Transformed soon). That means I'll wait patiently for May 24 when I can play Donkey Kong Country Returns 3D on the 3DS.

Plus, it is being developed by Monster Games, which feels like a terrible waste of talent, and those guys made one of the best Wii games no one played in Excitebots and came out strong at the launch of the Wii (Excite Truck) and 3DS (Pilotwings Resort). It might just be a port, but it is by a team that has proved their worth to me three times. And seriously, have you guys seen how hot this game looks in 3D? It's look, whoa; The depth, man.

Does anyone know if it's multiplayer on the 3DS? What about download play? On the Wii my wife and I played this together it was much more fun with someone else. It would be awesome if they incorporate download play!!!

I'd be opposed to this port if the 3DS was doing poorly and didn't have good original games already.


But that's not the case, so port whatever you want, Nintendo.

I'd be more excited for it if I literally just hadn't got around to buying the Wii version a week before the announcement of this. I love the Country games and I just couldn't hold off any longer.

I never played the original, so I'm excited for this.

I'd be more interested in this if the 3DS was powerful enough to handle Wii ports without compromises. It's extremely unlikely that the 3DS version of DKC is going to manage the same framerate as the Wii version.

It certainly has more jaggies. :P

The waggle turned me off the original as well.

I didn't pick up the original either, so I may get this.

I'm honestly perplexed by the amount of people who have complained about "the waggle". I did have trouble with it for the first couple of levels, but by the end of the first world it was second nature. It's no more troublesome than the "waggle" used for the spin jump in NSMBWii, which give you a little bit of extra airtime in your jump; I got used to that. So much so when I jumped back to the first game on the DS after an extended NSMBW playtime, I found myself shaking the DS in order to get some extra hangtime!

I dunno if I'll pick up the port or not; I played the original to 100% completion (though I wasn't insane enough to play thru the game in mirror mode). If there's an extra mode or new levels tossed in, I'll check it out.

DKCR requires more precision from the roll than NSMB does from the spin jump. The waggle spin move in both NSMB Wii and the Galaxy games is designed in a way that it doesn't need to be exact, because it isn't really capable of it. There's a lot less room for error in DKCR. The waggle works okay, but there's a reason I set up homebrew on my Wii to be able to play the original with a Classic Controller.

I'd be far more interested in this if it went from portable to console rather than the other way around. I did thoroughly enjoy the original, even with waggle. I would consider this on sale, especially if there are extras beyond 3D (I haven't heard there would be any).