How did Danny's quest for the golden 3DS Monter Hunter ticket fare? 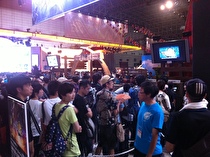 Monster Hunter is a huge deal in Japan. I mean, HUGE! Everywhere you go, you will more than likely run into students playing in groups at a restaurant, see a business man playing on the train, or hear kids talking about it while clutching their PSPs. Nintendo is hoping to capitalize on the popularity of the series by not only bringing over an enhanced port of Monster Hunter Tri (Tri G) to the 3DS, they are also going to bring the next iteration of the series to the 3DS as well. Nintendo has also developed an add-on for the 3DS with Monster Hunter in mind, for crying out loud! There aren’t many third party titles out there that can force Nintendo to make peripherals for their systems, but Capcom’s hot title has that kind of clout.

Which brings us to the 2011 Tokyo Game Show. Monster Hunter 3G was playable for the first time anywhere this past week, and thousands of gamers from around the globe had a chance to play it. However, it wasn’t as easy as just queuing up behind a sweaty nerd in front of you, and believe me, there were tons of them, myself included! This is my monogatari, or tale, about trying to obtain the much sought after priority ticket for Monster Hunter 3G on the 3DS.

The exhibitors set up a special priority ticket counter for some of the most popular titles and events on the show floor. This year, Final Fantasy XIII-2, the Playstation 3 version of Ni no Kuni, and Monster Hunter 3G were the titles that required one of these priority tickets to be able to play them on the floor. Monster Hunter had two kinds of tickets, one for single player, and then one for multiplayer. On both of the public days, the multiplayer demo was available in the morning, while the single player was open for ticket holders in the afternoon. 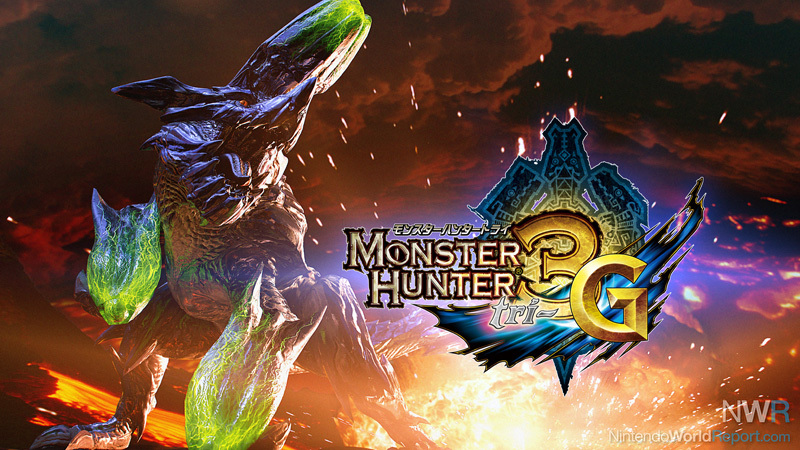 Getting the priority tickets for Monster Hunter was no easy feat. I went on both of the public days on a quest to obtain one of these elusive tickets which would give me the chance to play one of the hottest games in Japan. On Saturday, the first public day for TGS, I arrived at Makuhari Messe around 9:30 that morning, and made my way to the show floor slightly before 10:00 AM. After making my way to the massive Monster Hunter 3G booth, I was reminded by the Capcom staff that I needed a ticket to enter the line to play the game. They told me where I needed to go to get the ticket, so I naively went on my merry way. After a bit of confusion on where the priority ticket counter was located, I eventually found out that all of the tickets for Monster Hunter for the whole day  had ran out before the start of the show. I tried to utilize the power of my press badge to see if it could get me anywhere, but alas, there was nothing that the Capcom staff could (or would) do for me regarding Monster Hunter.

When I got home on Saturday night, I realized that Japan does not mess around when it comes to Monster Hunter. Everyone wants to play this game and only the uber-elite nerds are going to get their chance. I realized that I would have to take the first train from where I live that morning (at 5:30 AM) and take the hour and a half train ride to the convention center. I made sure to do some research as to where the ticket counter was located and made my plan of attack. I went to bed that night sometime after midnight, anxious about the next morning.

After getting a few hours of sleep, I made my way to the convention center early on Sunday morning. By the time I got closer to the Kaihin Makuhari (the station nearest to Makuhari Messe), there were already quite a few people boarding the train that were obviously on their way to TGS. When I arrived at the station and made my way outside, some people were running to towards the convention center, most likely trying to get as close as they could to doors. I ran into a bit of snafu when I go there. You see, the priority tickets were being handed out near the main entrance located in Hall 1. To access it, you had to come through the visitor entrance. Well, being a member of the media, I could not get my media pass for the day if I entered there. I HAD to go to a separate entrance in Hall 5, which was relatively far from the visitor entrance and the priority ticket counter. The only good news was that I would be able to enter the show floor at 9:30 AM. So maybe, just maybe I could either talk the Capcom staff into letting me try out the game before all of the Monster Hunter maniacs had a chance to line up, or even get to be the first person to line up for a priority ticket. Regardless, I knew I had to haul tail to the other side of the show floor to get that chance. 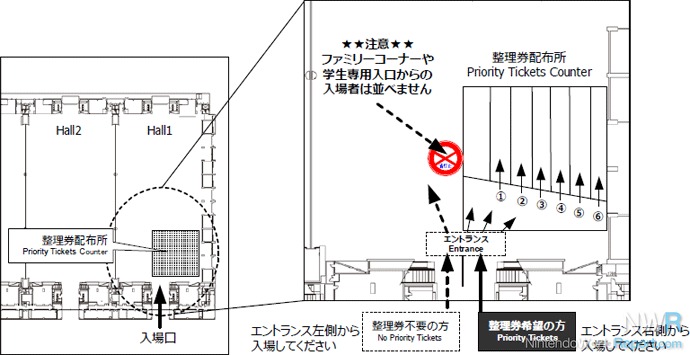 Here is the priority ticket counter.

When 9:30 AM hit, the exclusive media entrance was opened, I raced down the stairs and literally ran toward Hall 1. As soon as I got to Hall 3, where the Monster Hunter booth was located, I flashed my badge and asked the Capcom staff if I could play before the doors opened. They politely told me that in order to play, I still needed a ticket. Crushed, but still with a glimmer of hope, I briskly walked toward Hall 1 and the priority ticket counter. When I arrived in Hall 1, I could see the priority ticket counter, but I did not see a way that I could enter from inside the Hall. I asked a nearby Capcom staff member how I could line up for the ticket. “Oh, you have to go outside of the show floor, and line up behind the people in the visitor line.” I explained that I was a member of the media and that this was really important, but he apologized and said there was really nothing that he could do. If I left the show floor to line up in the visitor line at that point, I probably wouldn’t have made it inside the doors until 11:00 AM. I was defeated.

I honestly did absolutely everything that I could to get the priority Monster Hunter ticket. I could have tried to stay the night outside of Makuhari Messe, hiding in some bushes or something (the site stated that lining up over night was strictly prohibited). I could have bought a visitor pass last week if the future me could have gone back in time to let the past me know how ridiculous it would be to get access to the game. Despite this, being there early did allow me to get an eyes on with the game via the boxed in demo 3DS units displaying the 3DS conference video, which is available on the Japan eShop. I also got a hands on with the Circle Pad add-on. While I only had to wait a minute tops to see either of those things, later in the day, people were waiting for up to two hours just to see the videos for the game. This just further shows how ridiculously popular Monster Hunter is here in Japan. 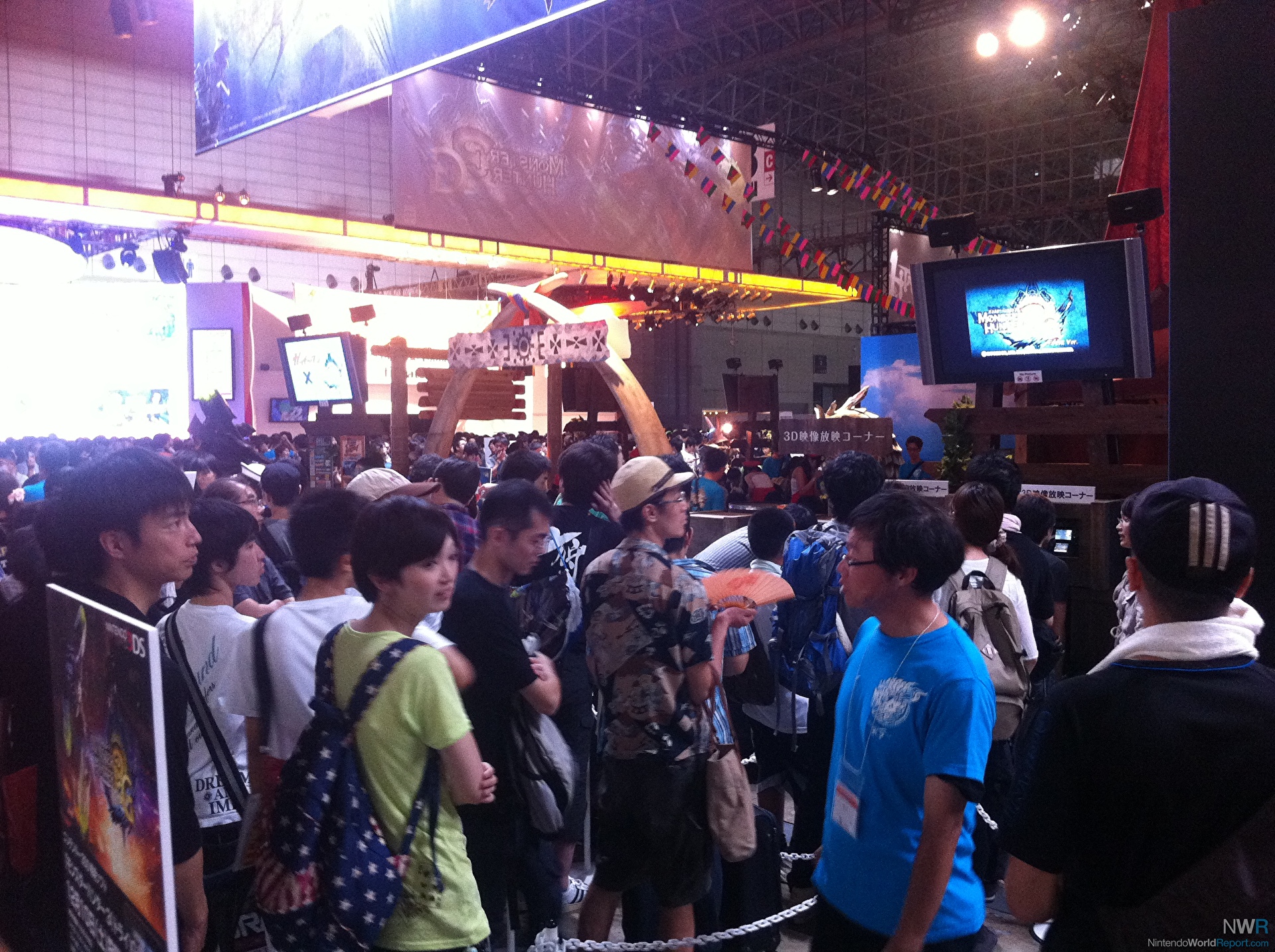 This is the two hour line for the video. THE VIDEO.

Monster Hunter 3G for the 3DS was clearly the most anticipated title at TGS this year. If there were no priority tickets, people would have clogged up the entire convention hall. Last year, apparently the PSP version of the game also had priority tickets and was just as crazily anticipated as the 3DS version was this year. This entire experience has definitely taught me one thing - don’t ever underestimate Japan’s otaku resolve.

Plan C:
Find people who have played said game and interview them for a story.

Making Epic Loot from Killing/Capturing Monsters with up to 4 Players.

Making Epic Loot from Killing/Capturing Monsters with up to 4 Players.

So, what, you throw not-pokeballs at them? Shoot them with a .44 Winchester lever action out of a back of a Jeep? Is this Japanese WOW without the MMO and chinese gold farmers?

So, what, you throw not-pokeballs at them? Shoot them with a .44 Winchester lever action out of a back of a Jeep? Is this Japanese WOW without the MMO and chinese gold farmers?

All the hunter gets is a variety of blades, blunt objects, bows, traps, and other equipment. There is a bowgun which is essentially a rifle but the wyverns never go down in a few shots. I guess you can say it's like World of Warcraft without the MMO bits. You can also say it's like Diablo without the PVP, a 4 player limit, and you mostly find materials to craft equipment rather than mostly find equipment. Or you can think of it as Phantasy Star Online where most of the time you fight bosses, a camera, and lengthy animation delays that make the game "hard" (or just another thing to manage if you are able to wrap your head around it).

I love these games and can't wait for both versions to come to the US.

I'm going to try to get this on launch day (December 10). I'm going to be keeping an eye on when they start pre-orderes. Thank god it's releasing on a Saturday, just in case I have to camp somewhere over night. Hopefully it doesn't come to that.