Embr imagines a world where you and your fellow independently contracted gig workers (with minimal oversight) are tasked with the job of fighting fires, saving lives, and sometimes delivering meals. The tone and setting of the game could probably be best described as one part wacky cartoon farce and one part biting social commentary of big tech and media corporations. This theming is at the core of how the player engages with the game. The main menu is a cracked tablet, in-game messages pop up as push notifications from Embr, and ads for media and services serve as loading screens. But as dystopian as some of these elements sound, the satire is always tongue-in-cheek. For instance, early on you’re introduced to Hosr, a Canadian competitor to Embr, whose goal is to spread socialism to the United States and turn oil barrel factories into maple syrup factories.

The general goal of most missions is to rescue your clients before the burning building collapses. However, there is no set path; instead, you’re given a set of tools to meet your objectives in any way you see fit. Sure, you could barrel right through the front door and make your way up the stairs normally, or you can prop up a ladder and smash your way in through the window with your trusty axe. This flexibility makes each mission a sort of free-form puzzle about being efficient in getting from point A to point B, which is rarely an easy task. These buildings are full of clutter, obstacles, electrical and gas hazards, and of course fire. What’s more, these hazards can compound into worse problems. Hosing down fire might clear a path for you, but if the room has an exposed electrical wire then you could have made things worse for you as the water conducts the hazardous current throughout the room. No matter what difficulty you choose, your knowledge of the building, your tools, and your efficiency will be tested. 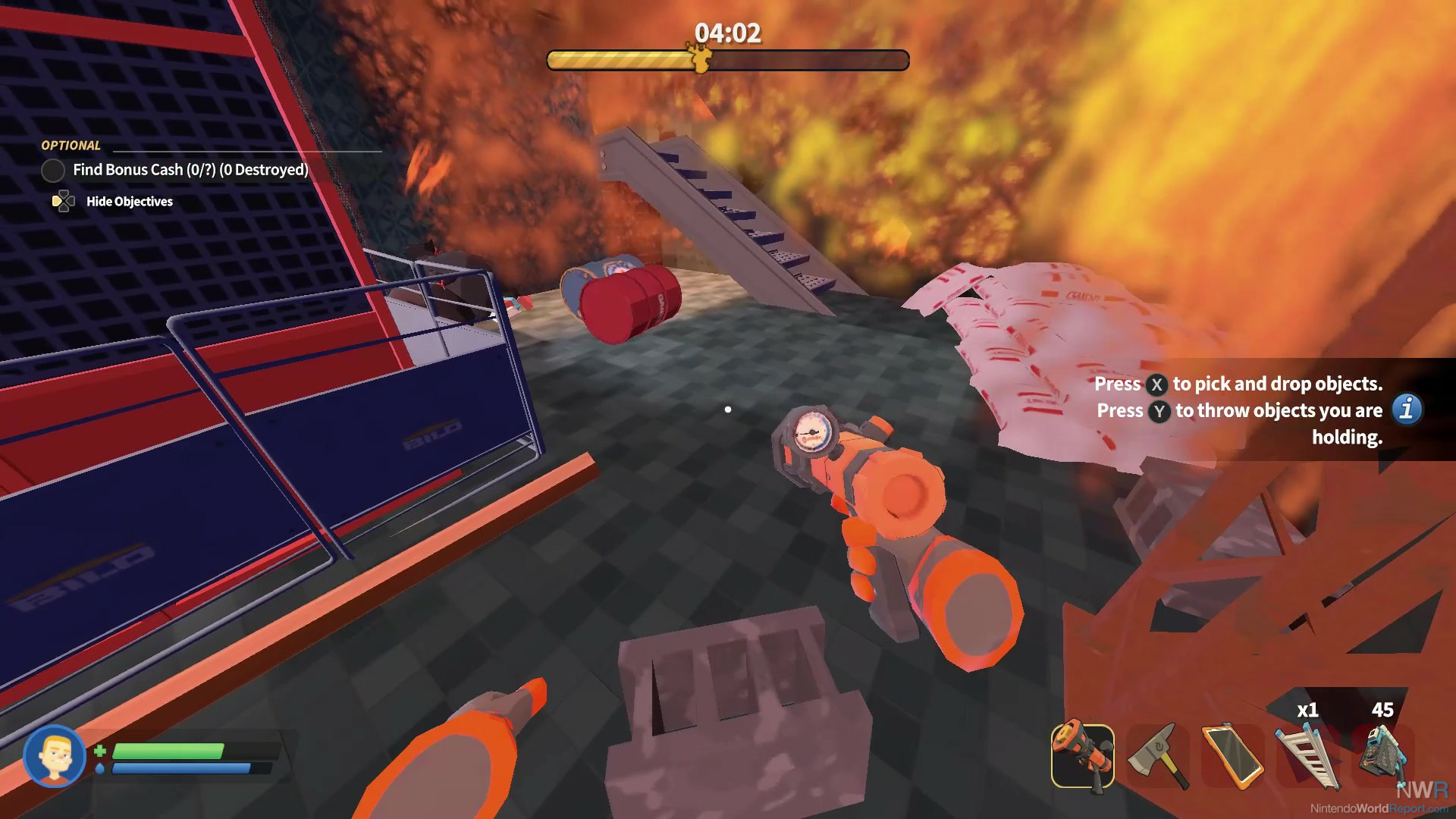 At least at the time of this review, your patience may be tested as well. There is no getting around it, Embr on Switch looks and plays rough. Beyond the very noticeable low resolution, there are a slew of issues that made playing this promising game a disappointment. Pop-in is abysmal, with objects appearing just feet away from you, and some of the visual effects have been downgraded past the point of what’s reasonable. For instance, hacking through doors with your axe on other systems will show damage; on Switch the doors just darken. The worst of it though is the particle effect for fire, which on Switch is an eyesore. Certainly, compromises are expected when porting to weaker hardware, but Embr crosses a line. And even beyond fidelity, these levels are full of repeated assets, bright saturated colors, poor effects, and clutter that make prolonged play a strain to the eyes. 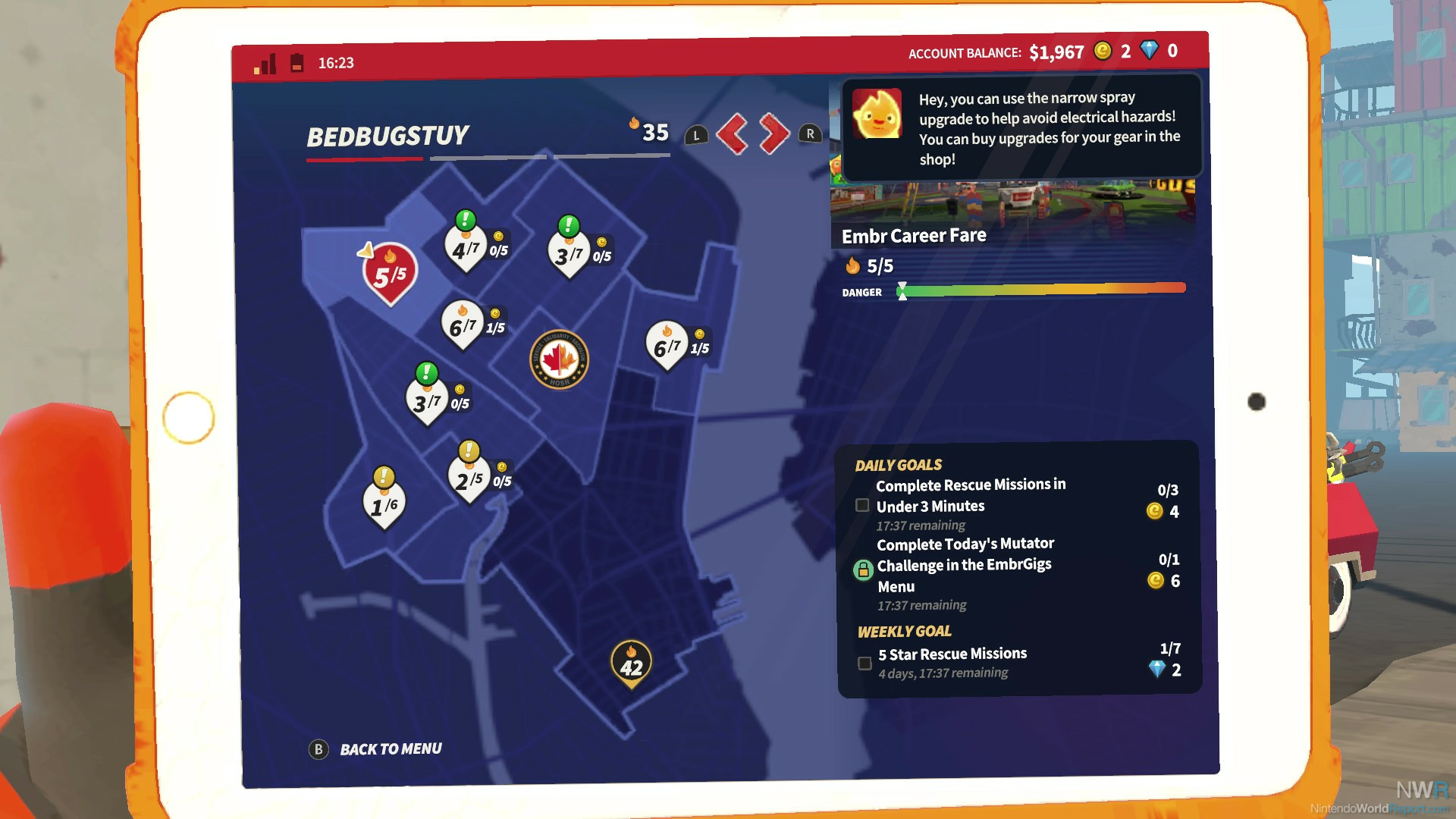 Controls fare even worse, with some of the most frustrating physics and movement I’ve dealt with in a while. Let me try to unpack this. Your character’s movement is relatively quick on solid ground but you can be slowed down to a crawl by different hazards like fire and electricity. That’s all fair and good. The problem is that just about anything else can also slow you down. These houses are cluttered with trash bags, furniture, and other debris that your character can either be slowed or stopped by when you come in contact with them. Over time, this creates continuous friction where the act of simply moving is frustrating. There are tools to either destroy or move objects, but this is a bothersome solution to an unnecessary problem. Struggling against the clock, fire, and other hazards while pursuing main and side objectives is already enough; struggling to move your character is a tedious addition.

Another issue is how movement is detected. At times I would find myself being thrust backward seemingly at random. I couldn’t tell if this was a product of friction against objects or a bug that hadn’t been ironed out yet. After messing around with the controls for a bit I think I may have figured out the issue. Embr has no gradations between being still and a full sprint when reading player inputs on an analog stick. So, inching forward slightly is interpreted to be just as fast as a full tilt. This is also true of moving backwards, which is just as fast as moving forwards. So whenever I tried to adjust my position slightly backward my character would jerk back. To be honest, I’m still not sure if that is entirely the issue at play here; maybe the movement is bugged or maybe I’m experiencing some form of input lag in single-player. Whatever the case may be, the unintended jerking back and forth resulted in irritating play sessions. 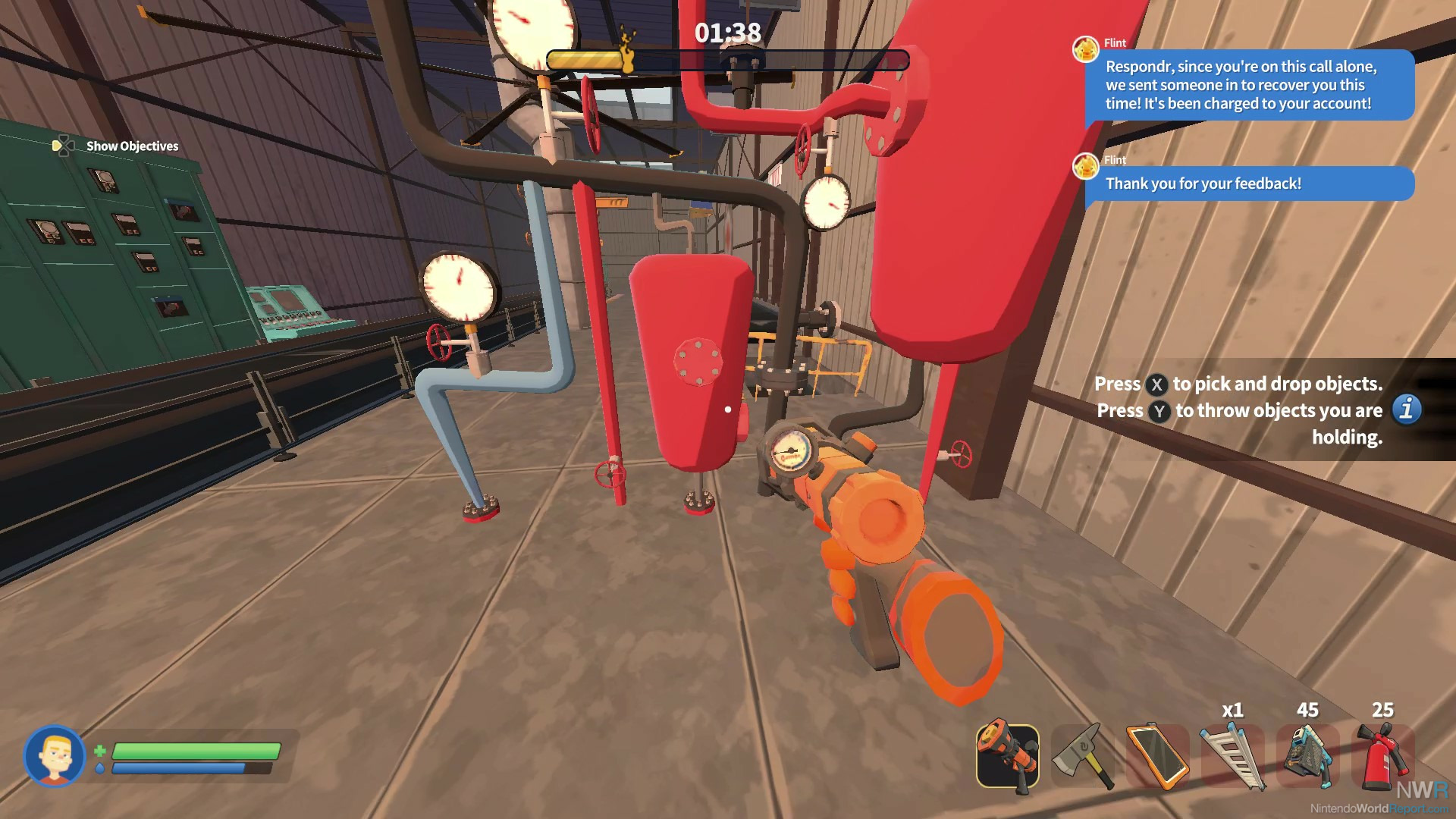 Online play, a major selling point in the game’s marketing, is where Embr’s dim light is allowed to shine a bit brighter. Maneuvering around frustrating physics and rough controls is easier to bear when the goal of completing a mission is shared by multiple players, which may even turn some of the tragedy into comedy. So far I’ve only been able to join sessions with friends with no success in finding public matches in either lobbies or quick play. Whether this is a system matchmaking issue or a simple player population issue is hard to say. The private matches I did play worked well with no connection issues and allowed for more inventive collaborative play that was noticeably better than floundering through some of these levels alone.

The core gameplay is fertile ground for some great emergent moments in solo or multiplayer, and the game is chock full of content. Each mission has bonus challenges such as meal delivery or demolition, and there are escape missions, boss battles, difficulty options, loadouts, upgradable items, and cosmetics. Even if you only play strictly single-player, Embr has so much to offer were it not hampered by the visual noise, performance and control issues, and truly frustrating physics. In a lot of ways, playing Embr felt like playing a very promising early access game that would be worth waiting for the arrival of a polished 1.0 release. The devs even included an easy feedback system for bugs, framerate, controls, and gameplay issues in the main and pause menus. But I can only review the product in hand, which though built on solid foundation, quickly crumbles down.