On the surface, Earth Defense Force is a game series about killing giant ants. Just like a Hollywood B-movie, each title of the series knows what it strives to achieve: a silly, cheesy, science fiction title about shooting giant insects and aliens in the face. What more could one ask for? In an attempt to bring a new spin on the formula, developer Yuke’s takes the reins to make a colorfully comical entry that works well in a few places, but fails to hit the mark in many others.

To say it straight, the EDF series has never really cared for a deep narrative outside of a serviceable premise and solid way to motivate the player to fight hordes of ants. This works perfectly fine in the comical B-movie scenarios the series has dulled out over each installment. This time, the block-shaped Earth is shattered to pieces and it’s up to you to rescue and enlist those willing to join the fight against invading alien forces. While a great jumping off point for the stereotypical “power of teamwork” type of story, there is such a thing as too much comedy to the point where things just become too silly for their own good. The main culprit of this is likely its approach to voicework. 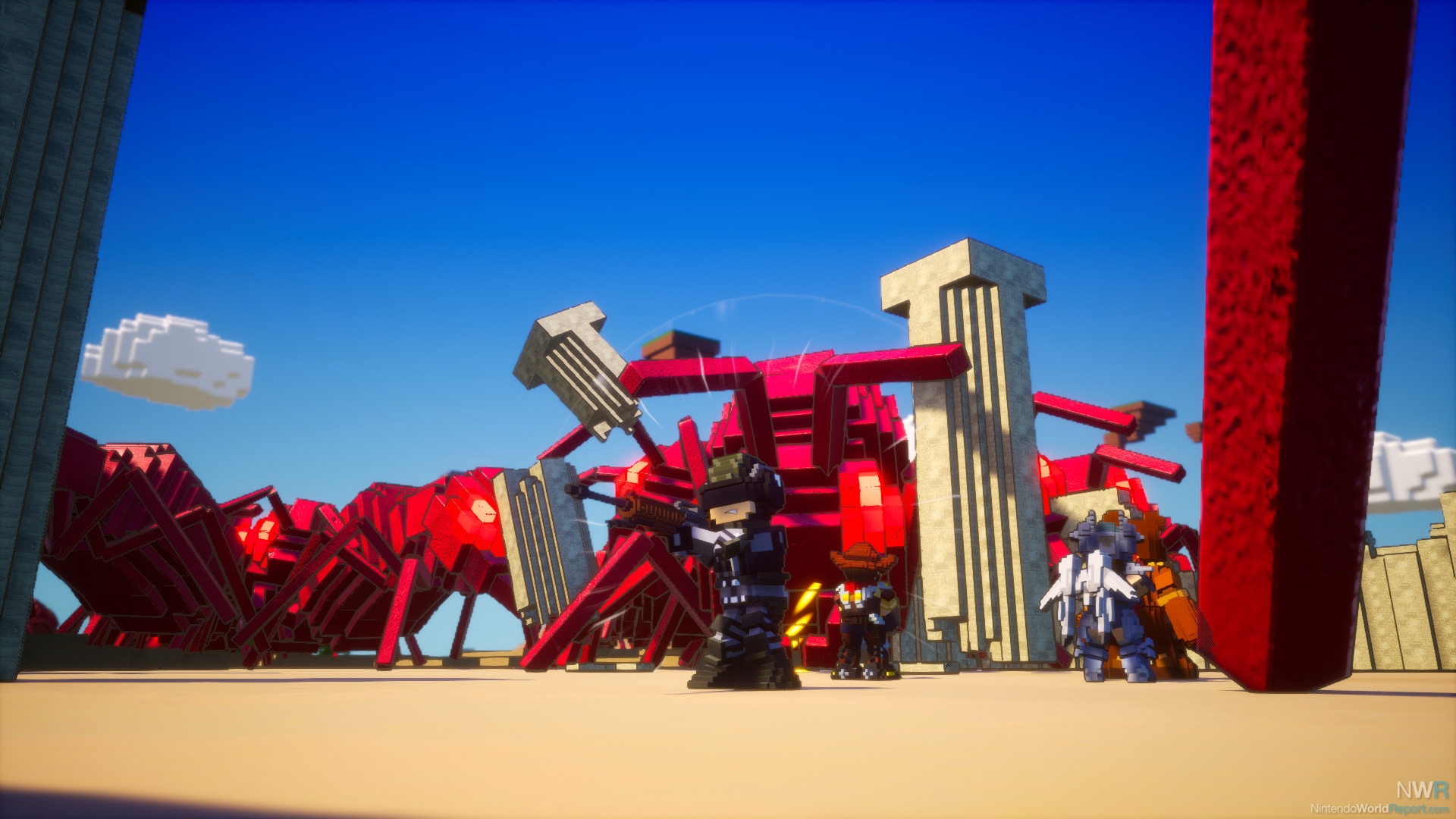 I was surprised as to how much voicework there is. This is because of the sheer amount of playable recruits that can be used in a four-person EDF crew. However with the volume of playable “brothers and sisters” comes an astronomical amount of voice lines. The problem isn’t how many there are though, but how often they’re used. Each of them will spout the same several lines over and over when playing as them to the point of becoming very annoying. If the progression system encouraged players to constantly swap characters in and out of the team on a consistent basis, this wouldn’t be that bad of an issue. This isn’t the case.

Rescuing brothers and sisters to the roster is quick and easy; there are three to save in each level. The positive side to this is that each of their weapons is also available to the player, giving recruits the ability to change weapons but still keep their skills like sprint, flying, or throwing grenades. Each character has their own ultimate ability as well to use late into a mission. The downside to this though, is that they can’t just change weapons out the gate; they need to be upgraded first. At the end of a mission, only the active party gains armor so it pays to stick with a party and two or three substituts on standby. This diversity does little to nothing if you’re encouraged to stick with a limited number. At that point it feels like you’re unlocking new weapons instead of members of a crew. Still, there are plenty of weapons to experiment with to try to keep things interesting. 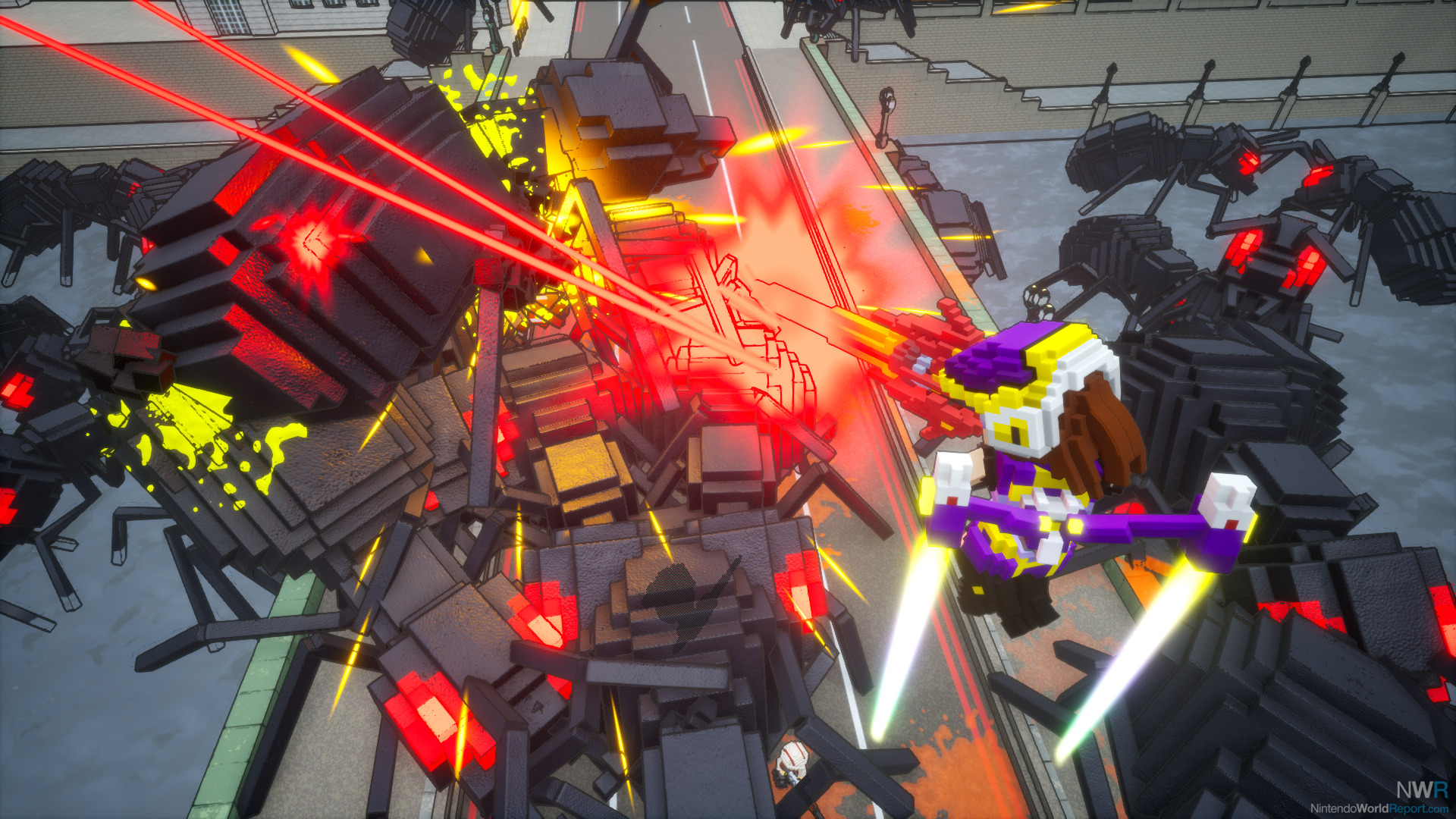 The art style is really appealing. World Brothers looks vastly different from other games in the series, offering a more colorful look with its voxel based models and environments. The roster of character models and monster designs are appreciated too, keeping the art fresh throughout. I welcome a change like this as it sets this EDF game apart in a really bold fashion that gives it a unique identity. Even with charming art, the game is barely smooth to play.

The Switch version leaves a lot to be desired. While the whole series is known to have unstable framerates with the amount of enemies on screen, this title takes things down even further. The developers do use reliable strategies such as level of detail management and dynamic resolution to try to keep the target framerate. The simple visuals too do well to set a 30 frames per second ceiling and it’s kept there relatively in lighter encounters. However, once chaos ensues with enemies flooding the screen, the framerate tanks harder than most games on the console making controlling difficult. How Earth Defense Force evolves its difficulty is by throwing more enemies on screen to clear so the higher the difficulty, the more often framerate issues persist. The game looks very blurry and feels sluggish as a result. The Online mode was not tested for this review, but one can imagine that performance would suffer even further depending on network stability.

Earth Defense Force: World Brothers ultimately falls short of accomplishing its mission on Nintendo Switch. The roster variety is hindered by the progression system which discourages changing party members before each mission. The color palette and art is very vibrant and colorful, but the game looks more blurred and choppy as more and more enemies are thrown at the player in the pursuit of a challenge which is the World Brothers’ downfall. For EDF fans and newcomers alike, this call to action isn’t worth answering.