Who would have thought that in 2021 developer Cyberconnect2 would revisit the world of Tail Concerto and Solatorobo: Red the Hunter? For those out of the loop, Tail Concerto and Solatorobo were colorful 3D action platformers featuring a world inhabited by anthropomorphic cats and dogs that were released on the PS1 and DS respectively. Solatorobo was released in 2010, and outside of a Japan-only mobile game in 2014, there hasn’t been a follow-up since. That all changes with Cyberconnect2’s first venture in self-publishing with Fuga: Melodies of Steel, which trades the 3D action of previous entries for on-rails turn-based RPG combat with base building elements. And yet, maybe the most notable departure is tone.

The opening is downright haunting. In an unmistakable allusion to the Nazi invasion of France, our ragtag group of anthropomorphic puppies and kittens—the oldest of which is 12 and the youngest 4—are robbed of their homes and families in the Gasco countryside by the Berman empire, and are guided by a mysterious voice over the radio to the location of a hulking tank called Taranis. The tutorial begins with the voice instructing the children how to operate the steel behemoth and its weapons as they plow through the Berman military. The nightmare culminates with a boss encounter, where our crew of tweens and toddlers meet their match. Facing certain doom, the mysterious voice suggests the Taranis’ secret weapon: The Soul Cannon. This giant weapon will eliminate the enemy in one shot, however, to use this weapon, one of the children must be sacrificed to power the cannon. Choosing that first child sacrifice was alarming and uncomfortable to make, and though the choice is quickly reversed, it left me determined to never have to resort to such drastic measures again. 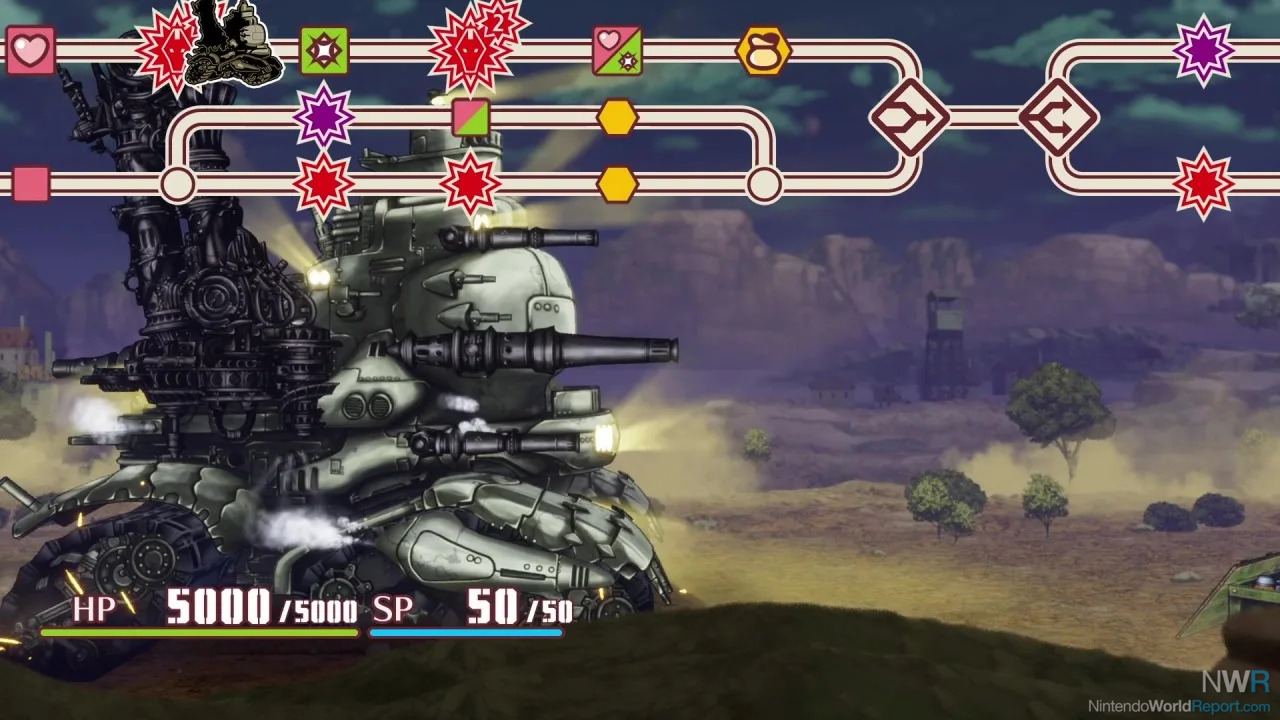 But as effective as that opening hour may have been, it quickly became apparent that the horrors of war, child soldiers, and death resulted to be in service to what is essentially a paint-by-numbers save the world story. Our main characters are revealed to be one-note archetypes featuring tropes like the plucky farmer boy lead, the maternal childhood friend, the nerdy type that has trouble speaking with girls, the villain seeking world domination… I could go on. The darker elements of the story, much like the use of World War II imagery, are more of a tonal backdrop to hang the narrative and gameplay on rather than the earnest exploration of the loss of innocence or the traumatic effects of war on children that I was expecting given the premise. Much of the narrative is comprised of the children making new friends, learning to work together, and bonding as a crew. These moments can be genuinely cute, and I imagine there is an audience that will appreciate the juxtaposition of childlike innocence and wartime peril. That’s not to say that the writing never attempts to touch on heavier material, just that it ends up coming off as toothless when taken all together. In other words, the story’s bark is worse than its bite.

The core gameplay remains solid throughout, however. Fuga is structured into about a dozen chapters, with each chapter playing out with your tank slowly making its way from left to right along a dotted path. Each dot indicates an event or item, most of these are combat encounters but some are pickups to refill your pools of health and skill points or materials for upgrades, and others are intermissions where the fighting takes a backseat and you’re allowed to manage the characters and base building. As you progress, chapters will include forks in the paths, and it will be up to the player to choose between either the safer paths with less combat and more HP and SP refills or to brave the more dangerous paths for the boosted experience points and material rewards to upgrade the Taranis’ many weapons and facilities. The difficulty curves for these paths feel just right. I never felt consistently capable to handle the dangerous paths and neither did it feel prudent to only ride the safe paths either since both experience points and weapons and armor upgrades were so valuable. 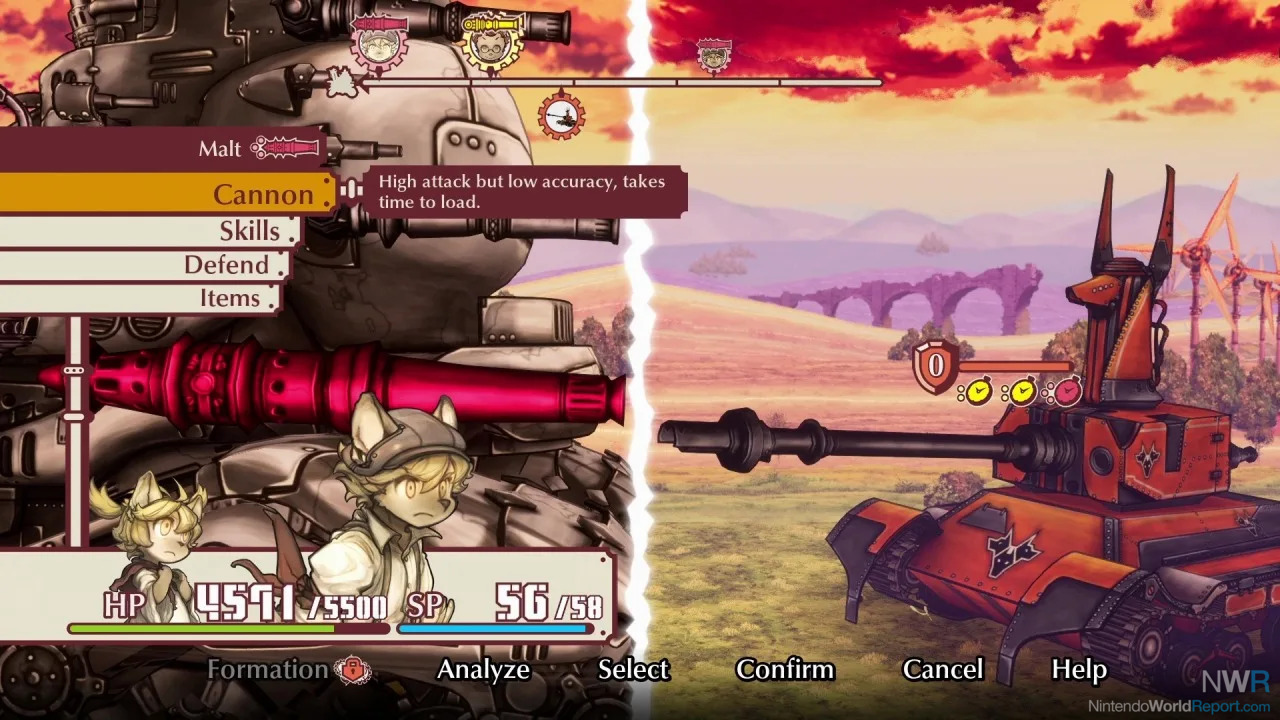 Combat plays out in turn-based battles with speed-based turn orders. Knowing when your opponent is about to strike is important since enemies hit really hard, but can be staggered if they are hit by the right weapon type denoted. The Taranis is equipped with three battle stations that can be armed with either a machine gun, grenade launcher, or cannon. Each child in your party is tied to one of those weapon types which all have their own traits and roles. Machine guns are the weakest but most accurate and typically carry skills that can puncture enemy armor, cannons hit like a truck but have difficulty with precision, and grenade launchers land somewhere in the middle of damage and hit rate while also specializing in inflicting status ailments. Those descriptions hold mostly true across the board, but each child plays a little differently. For instance, Socks and Hanna wield grenade launchers but Socks focuses on having a wide array of status ailments that he can inflict, while Hanna trades offensive capabilities for some of the best healing in the game.

Each combat encounter is ranked with a letter grade based on turn count, damage taken, and technique with higher ranks netting you more XP and better item drops. This incentivizes highly efficient playstyles over simple brute force. When played well, each combat is a puzzle that challenges the player to maximize skills, weapon types, character synergies, and good old-fashioned RNG to stagger, weaken and dispatch the Berman forces. Combat becomes especially satisfying in the midgame as more useful skills and capabilities are doled out, but towards the endgame, battles became more rote as I became perhaps became too capable, and as chapters dragged on a good deal longer than I would have preferred. 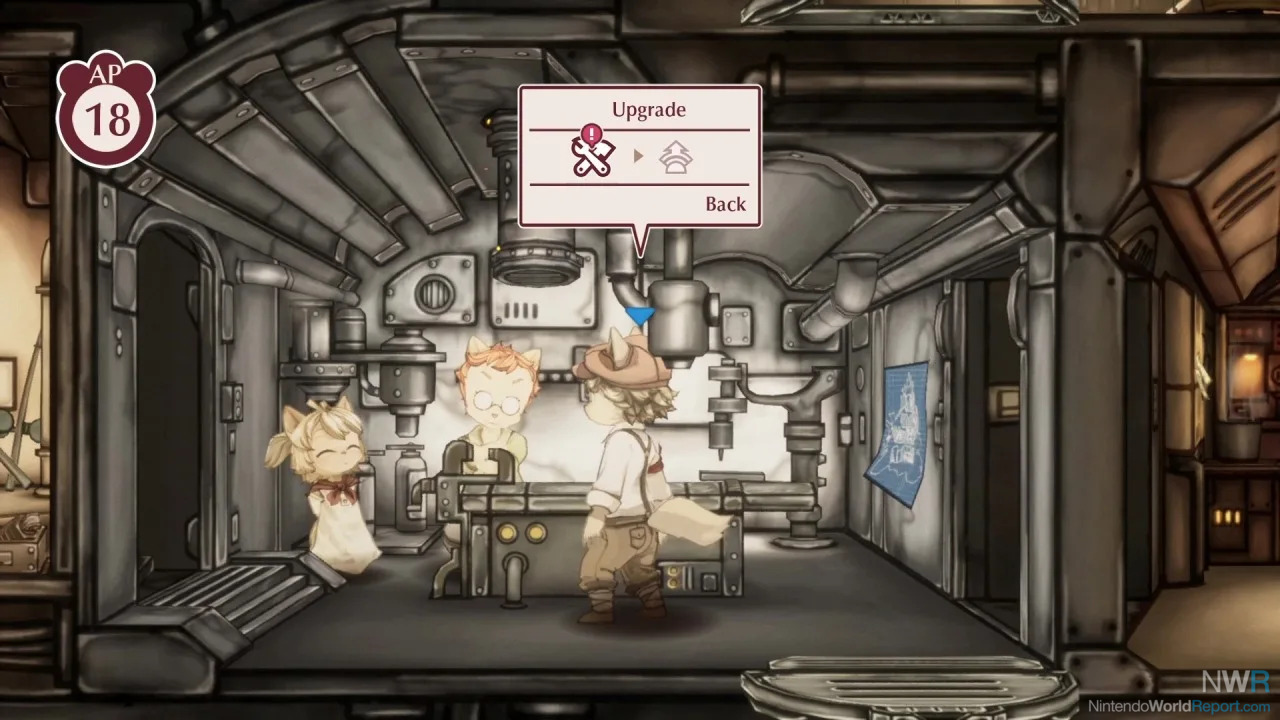 Base building is the low point of the game, unfortunately. During specified points, the crew will take an intermission where the children can farm, cook, fish for scrap, conduct upgrades and build affinity with each other through conversations. I get the sense that this was supposed to be the heart and soul of Fuga, a place of refuge away from the violence. And yet I groaned anytime an intermission cropped up. These moments are incredibly valuable since they cannot be repeated and there are only a finite number of them, given the game’s linearity, so if you want the best outcomes, you’ll be sure to do everything possible to get the most of your limited Action Points that determine how many activities you can do in an intermission. But the vast majority of activities amount to running around the tank, selecting from a menu, and checking off a list. As I played these sections, I was too often reminded of the monastery from Fire Emblem: Three Houses which was filled with the identical tedium of doing chores that could not be ignored or sped through if you wanted the best results in combat.

I’m torn on Fuga: Melodies of Steel. There is more that I like than dislike; combat is satisfying, the graphical style is appealing, the music ranges from good to phenomenal and the story, as cliché as it may be, is told well enough. And yet I still can’t shake the feeling that Fuga could have been so much more if it cut back on the boring base building and truly committed to a tone that the premise deserves. If a solid linear RPG that can be beaten in under 20 hours is something you’re in the market for or if you’re curious about the successor to Solatorobo then Fuga is at least worth a look. But if your interest was piqued by the trailer or heard the premise of children, war, and permadeath; then you should know there is a lot less here than you may have initially thought.