You stare into the void, and the void stares right back.

Visual novels are usually pretty far afield from my wheelhouse. When I do encounter them, they’re typically broken up by gameplay segments featuring bouncy ninjas or meta-joke-wielding cyber goddesses. I remembered hearing, however, about Doki Doki Literature Club (DDLC) back when it was originally making the rounds on Steam—a visual novel with a psychological horror twist—so I raised my hand when the review code came in. I’m certainly glad I did: DDLC starts innocently enough, but quickly descends into disturbing places, and I am here for it. 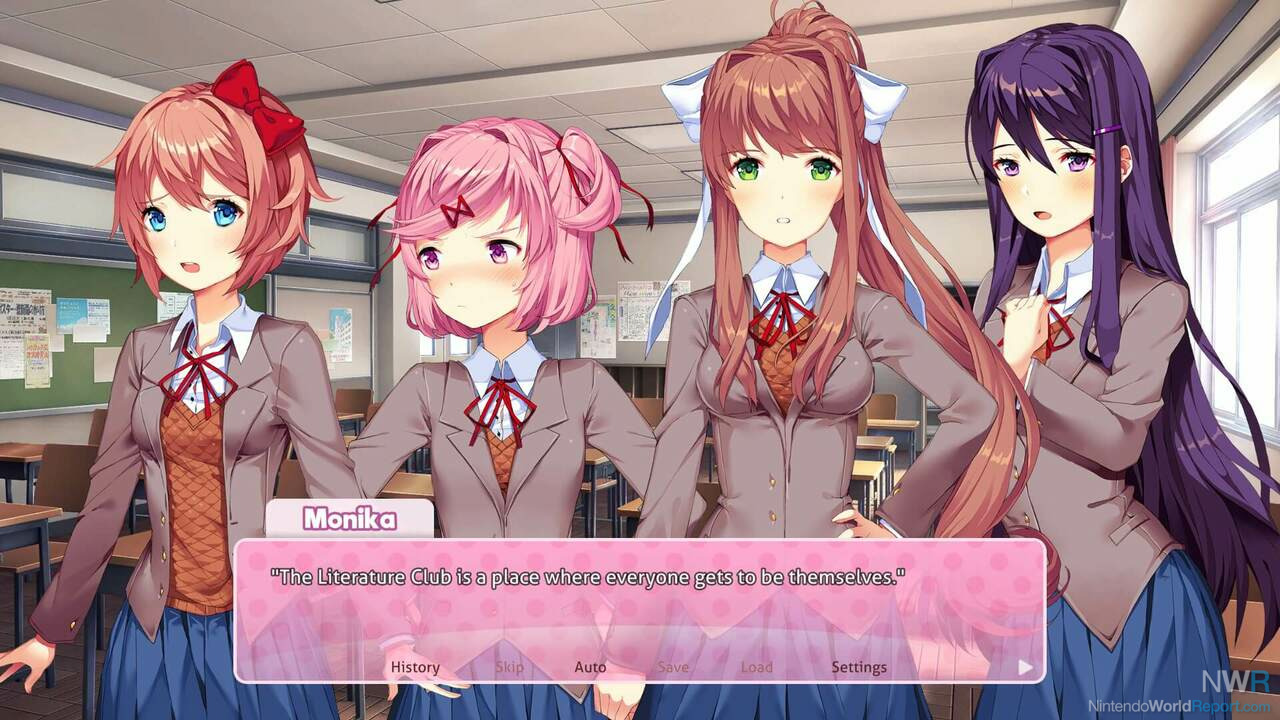 The setup is simple enough: you are needled into joining an after-school poetry club by your longtime friend and next-door neighbor, Sayori. The club is presided over by a girl named Monika. In addition to Sayori and Monika, there are two other members, Yuri and Natsuki. For the most part, this is a visual novel through and through: you’ll be pressing the A button a lot to move dialogue forward while various character portraits cycle to indicate who’s talking. After each story sequence, everyone will “go home” to write poetry to share the next day, which is where the bulk of DDLC’s gameplay takes place.

You’ll be asked to choose twenty words to incorporate into your poem (you never see the finished product). Your goal is to woo one of the three club members—Sayori, Yuri, or Natsuki—and each of them likes different kinds of words (you cannot romance Monika). The narrative will move forward when you show off your poem the next day. You’ll occasionally be asked to make choices that further affect the story, like whom to spend the weekend with.

All three roads, however, eventually lead down a dark path. Without getting too far into the weeds, all three classmates start acting strangely, and you’ll start seeing some interesting glitches that bring to mind something like Eternal Darkness. Part of the game’s structure is in restarting or loading up saved games, and this is where you’ll likely be introduced to DDLC’s meta-game: a virtual desktop. Here, you can view unlocked character portraits and music tracks, as well as gaze into the “game’s” file directory—another important aspect of gameplay.

I must admit I was surprised and lowkey disturbed by how far DDLC goes in terms of character arcs. To give you some idea of where you’ll be headed, one character eventually reveals that she’s spent most of her life depressed and hits you with something of an emotional hostage situation. Another of the girls starts interpreting your interest in her (via poetry) as infatuation and responds in kind.

DDLC definitely has a “what is reality” vibe that kept me interested, even as I found myself having to restart to move the narrative forward. Despite the restarts and reloads, DDLC is quite short. Thankfully, this version of the game also includes a few side stories that get you more familiar with your fellow club members, should you want to spend more time with them before things go sideways.

Doki Doki Literature Club doesn’t disappoint as an off-kilter visual novel. If you, like me, tend to avoid this genre, you might consider DDLC as an exception to the rule if you can handle some disturbing content.

I was wondering how they'd handle something that in the PC version of the game was literally handled by the game making files and you having to root around in the game's directory in order to do a lot of the fourth-wall breaking thing.

DDLC's whole appeal is that it's an actual creepypasta ARG that people got really into.

I was wondering how they'd handle something that in the PC version of the game was literally handled by the game making files and you having to root around in the game's directory in order to do a lot of the fourth-wall breaking thing.

DDLC's whole appeal is that it's an actual creepypasta ARG that people got really into.

The Switch version has a fake OS you launch the game from where you can do that stuff from. It also lets you access some added content from there.

I feel like some of the reviews and comments I've seen regarding this game do it a disservice. If you happen to see this comment first, please go play the game without reading anything about it. My wife and I knew some vague things about this game, which caused it to call flat for us. After playing games like Undertale, Pony Island, and others, this one just kind of felt like it was trying to hard to copy ideas from other places that did it better. And from what I'm reading, definitely play it on PC if possible.