Can this board game survive natural selection?

Evolution Board Game joins the likes of Catan and Carcassonne as another digital board game to make the leap to Switch eShop. While there is a case to be made that the lack of physical elements and human presence robs these experiences of their real-world coziness, Evolution makes a case for its digital incarnation by pairing excellent game design with modes, content, and features. Unfortunately, it also comes with its share of performance issues—at least on Switch.

As the name implies, Evolution is about competing for resources, adaptation, and survival. You (and up to three other players) control a species congregating at a watering hole that produces plant food. Each species takes turns eating plant food to support its population. The more populous your species, the more food they can eat, with the accumulated food and population being key in gaining the highest score and winning the match. If a species fails to eat, they lose one population; losing all population results in that species going extinct and having to start over with a new species. Cards are played to either increase population, increase body size for attack and defense, create more species, or be added as traits to your already existing species. These traits typically fall into the category of increasing your efficiency in eating, defending from predators, or speccing into a carnivore to become a predator yourself.

If that all sounds like a lot to digest, you’re not wrong. It took me a couple of hours playing before finally wrapping my head around the rules, and that early learning period was rough. I spent a lot of time reading card descriptions, fumbling with combinations, and shamefully losing against the easiest AI. However, once the rules and systems finally clicked, I discovered just how deep and engaging the systems in Evolution can be. 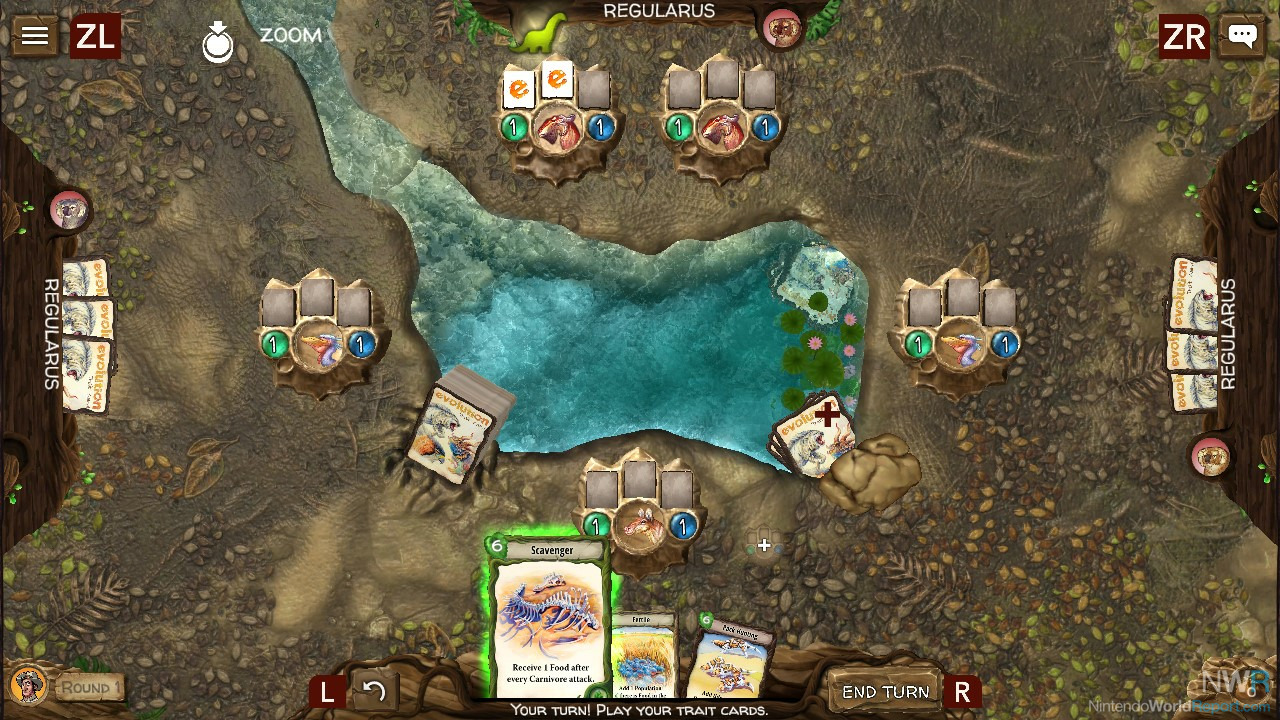 Evolution is, above all else, precisely balanced. The game presents itself in a fashion similar to other digital card games like Hearthstone or Legends of Runeterra, but instead of being a deck-building game with players pulling from personal collections, Evolution has everyone pulling from the same set deck each match (though decks can change from match to match). This levels the playing field and creates a consistency with which cards appear, and the cards that do appear are never overpowered or useless.

The best part of this system is how it rewards flexibility and mindful adaptation to new scenarios. Creating several species may be good for eating the most food, but typically leaves you susceptible to droughts and carnivores, on the other hand, opponents tend to get wise when you rely on carnivore tactics and bulk up their defenses, which could lead to your species going extinct from starvation. Even with the luck of the draw being a factor (as it is with most card games), Evolution always rewarded mindfulness and skill. As resources and opponents change, so must your strategy.

Making the most of its digital packaging, Evolution presents the player with loads of options. There is a campaign, offline AI quickplay, weekly challenges, leaderboards, unlockables, and multiplayer in three different forms: local pass and play, online public matches, and online asynchronous matches. The standout here is the campaign which helps players get over the difficulty curve and prepares them to learn the cards and strategies that will be found in the more intimidating online matches. The mode itself is not much more than a world map with levels that must be completed in a linear fashion dotted with bosses throughout, but it works well enough. 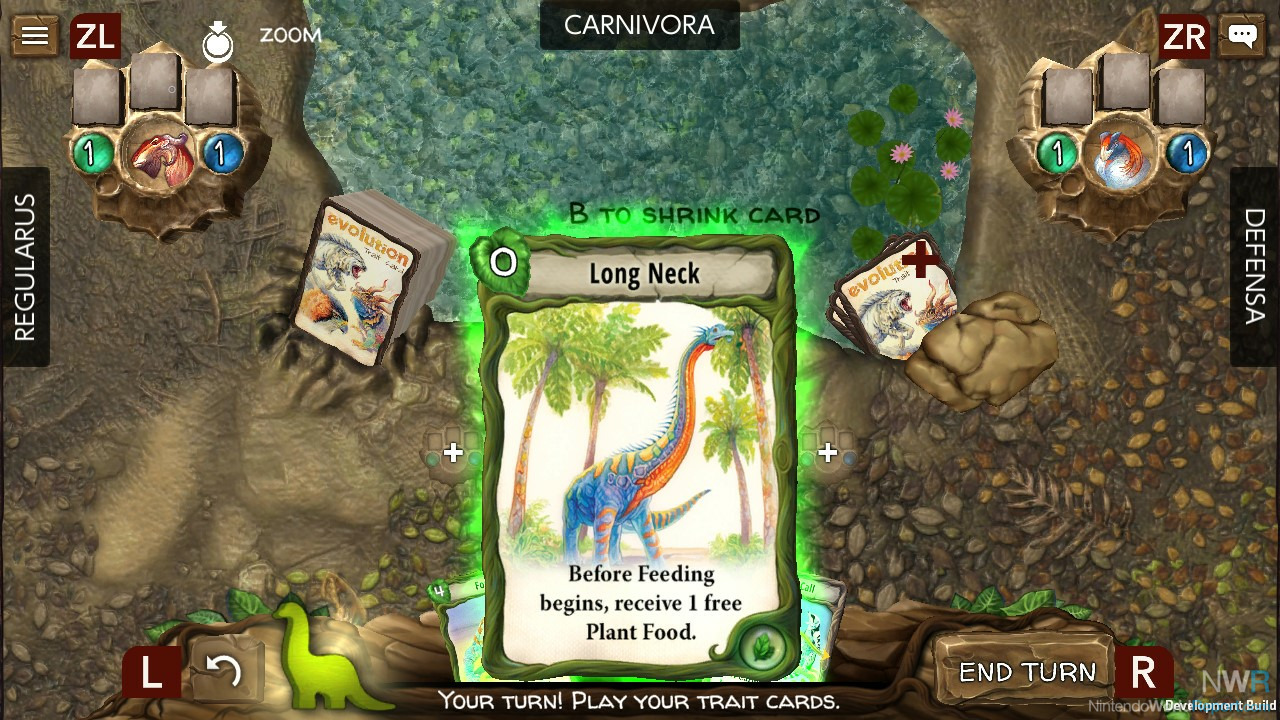 A noteworthy element of the campaign is the use of AI; beyond the typical easy, normal, and hard, AI will follow a designated behavior depending on their personality. For instance, the Minimus Rex personality plays to survive even in low food conditions, the Glutto Vastus, on the contrary, emphasizes eating as much as possible while the Defensa Grandis will spec into protective traits to counter offense. These personalities give each AI encounter a fun wrinkle as you consider your decisions with their strengths and weaknesses in mind.

The game itself is excellent, but the software application it comes in, however, is not. At least on Switch, Evolution is sluggish and sloppy. I’ve lost progress in the campaign when I left a mission and returned to it only to find I was punished several levels back. Transitions between menus and matches lack fluidity; at times AI opponents will be playing swimmingly and then the next they’ll stall before playing their turn. Controls are unreliable when using the Intelligence trait, and I’ve repeatedly had to use touch controls to get myself out of moments where buttons and d-pads seemingly decided not to work. Needless to say, this port needs work. Out of curiosity, I tried my hand at a single match on the iOS version on my iPhone 7, and though some sluggishness in the menus remained, the overall experience within the matches was much smoother and snappier.

Once I got over the initial hump and learned its systems, Evolution genuinely surprised me with its depth of strategy and breadth of content. The Switch version leaves a lot to be desired in terms of performance, and for now, despite my usual misgivings of the platform, I’d honestly recommend the mobile version. But if Evolution wants to survive on Switch in the wilds of the eShop, it would be wise to take a queue from nature and find a way to adapt.