Your once peaceful home of Forest Island is in shambles after the invasion of evil extra-dimensional shadows; and with the looming threat of these shadows summoning even more terrible horrors, the fate of the rest of the continent hangs in the balance. Thus begins YesterMorrow; you play as Yuri, a young woman who bounces between her child timeline and adult timeline to save her family, the divine guardians, and the world itself. If the story sounds ho-hum, that’s because it is. It’s your typical light versus dark, save-the-world fare. But really the story takes a back seat to the gameplay. This adventure plays out as a gorgeous 2D pixel art platformer that incorporates both puzzle and action elements, mixing the two in ways that keep both styles of play fresh. Unfortunately, YesterMorrow is plagued by its own shadows in the form of ugly, annoying, and even game-breaking bugs that infest the game from start to finish.

Zelda fans will likely notice that the time hopping premise has hints of Ocarina of Time, but the way this mechanic plays out is more akin to the alternating worlds of Hyrule and the Dark World in A Link to the Past (or Lorule in A Link Between Worlds). Similar to those titles, when Yuri jumps in time, the location remains the same, but the layout of said location will be different, allowing the player to progress through an area depending on which Yuri is needed for the task ahead. Though Yuri’s physical form changes from a diminutive child to a young adult, her skills remain identical across timelines. The major changes between these timelines comes in the form of the world; young Yuri’s world is mostly peaceful, focusing more on puzzles, while adult Yuri’s world is much more treacherous and action packed. This back and forth between both Yuris and both styles of platforming is at the center of the gameplay. 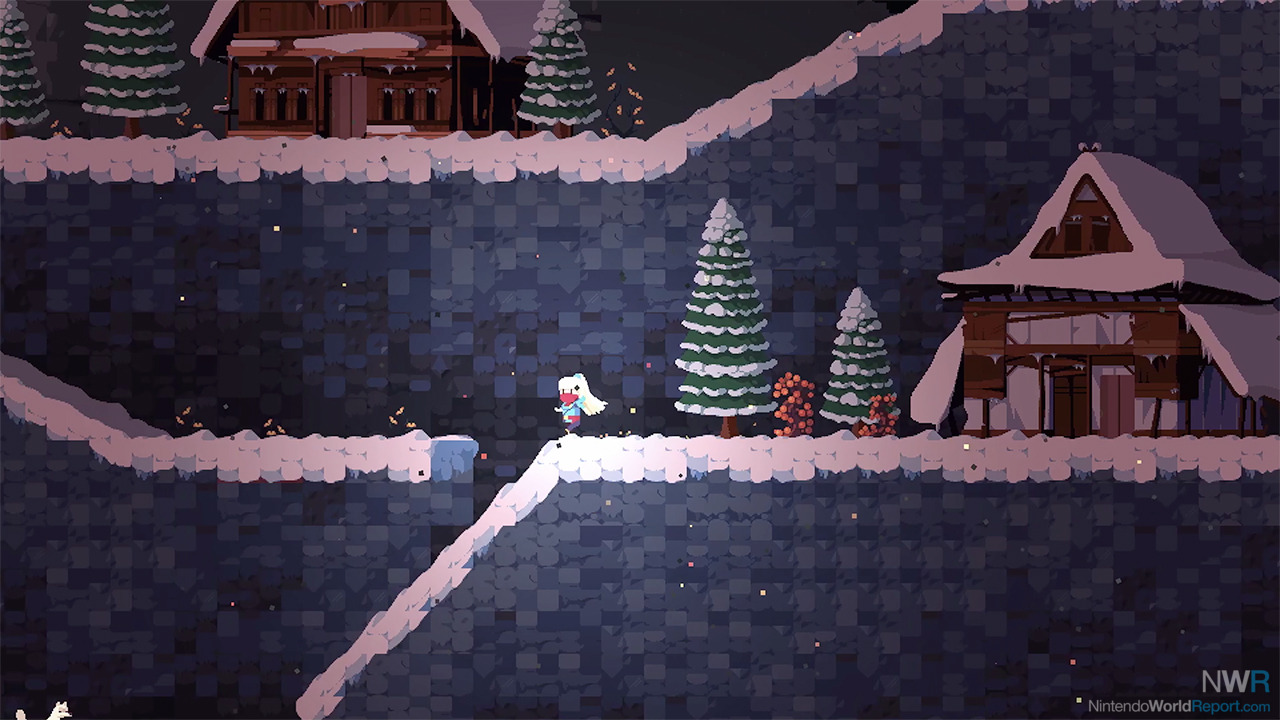 Dungeons are another apt Zelda comparison. YesterMorrow’s main platform challenges come in the form of different Temples that gradually increase in challenge and complexity and culminate in a boss fight. Upon beating these bosses, the player is rewarded with an item that expands max HP as well as a new ability to add to Yuri’s toolset, such as bombs, double jumping, and dashing. I have to add here that at least two of these boss fights incorporate an action-platforming obstacle course design that transforms the bog standard platforming boss into something exceptionally exciting, frantic, and blood pumping. These two encounters demand mastery over Yuri’s movement and abilities, and are without a doubt the high point of my playthrough. Unfortunately, these highs can’t save YesterMorrow from its long list of lows. There is no getting around it: YesterMorrow is filled to the brim with technical problems and shortcomings. Early on in my playthrough, nasty glitches of flashing lights and artifacting cropped up, obstructing my gameplay—not to mention also inflicting real discomfort on my eyes. Later I came across physics issues with my abilities: at one point my bombs defied gravity, flying up into the air instead of following their usual arc. This bug came in handy when fighting a particular boss that had missing—or nonexistent?—sound effects for his attacks. I even experienced the game crashing twice, booting me out to the console’s home menu; this is the first time this has ever happened to me since purchasing my Switch. An update did release during my second day of playing which took care of the ugly visual glitches, but didn’t save the game from a myriad of other bugs which culminated in a softlock that stopped my playthrough dead in its tracks. I could easily fill the rest of this review simply chronicling all the bugs, glitches, errors, and other technical hiccups that I experienced. Suffice to say, YesterMorrow is only playable in the loosest sense of the word. 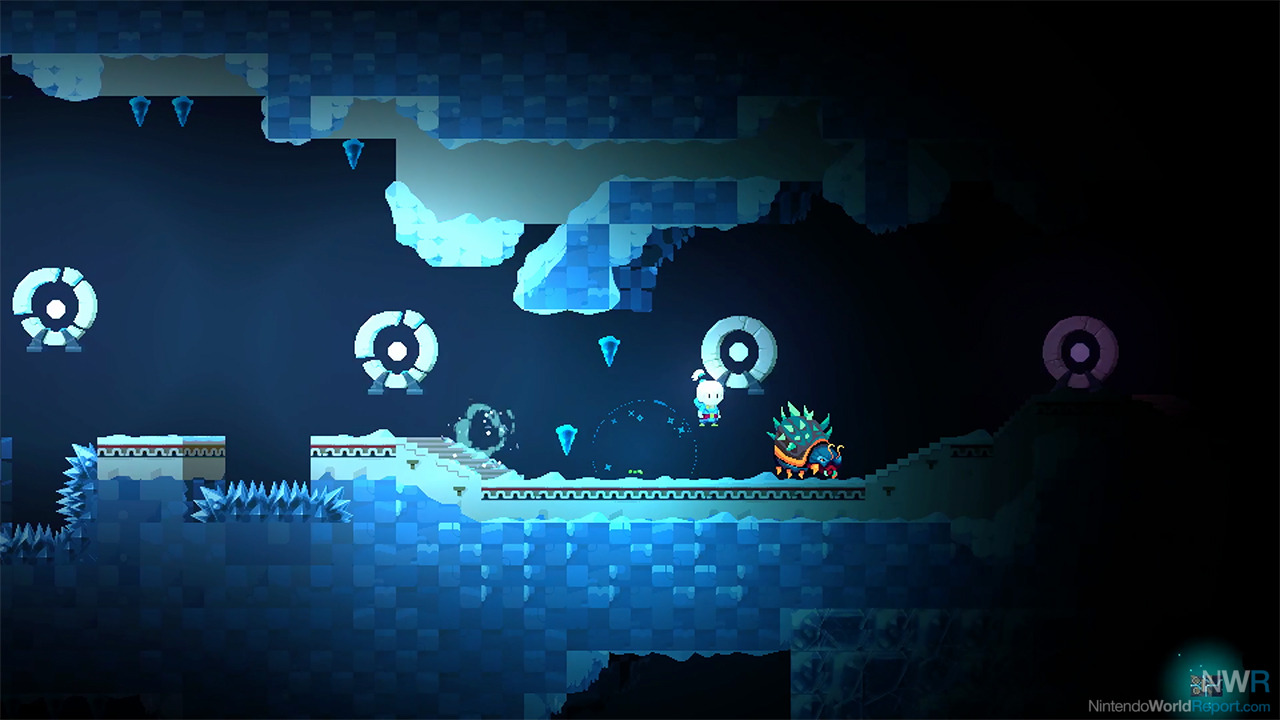 But I would be remiss not to call attention to the framerate dips. I’m unsure if this is a problem with the base game or the Switch port, but YesterMorrow will chug at times when onscreen activity is high. This is immersion-breaking at best, and rage-inducing at worst. There were moments I would be making my way through dungeons that demanded precise platforming, only to be derailed by frequent framerate drops.

These issues ruined my enjoyment of YesterMorrow as a whole, which is sad because there is a solid platformer underneath all the bugs. The controls are excellent (when the framerate allows); it’s a joy to roll, dash, and double jump, in particular.The pixel art is gorgeous, from the traditional garb of villagers, to the intricately crafted towns and the ominous abstract ruins; everything pops. This is high praise as the pixel-art-indie-darling-platformer subgenre is congested to the point of becoming its own cliche, but the devs at Bitmap Galaxy have what it takes to stand out. Unfortunately, their skill has been seriously overshadowed by the game’s technical performance, but also by something else. 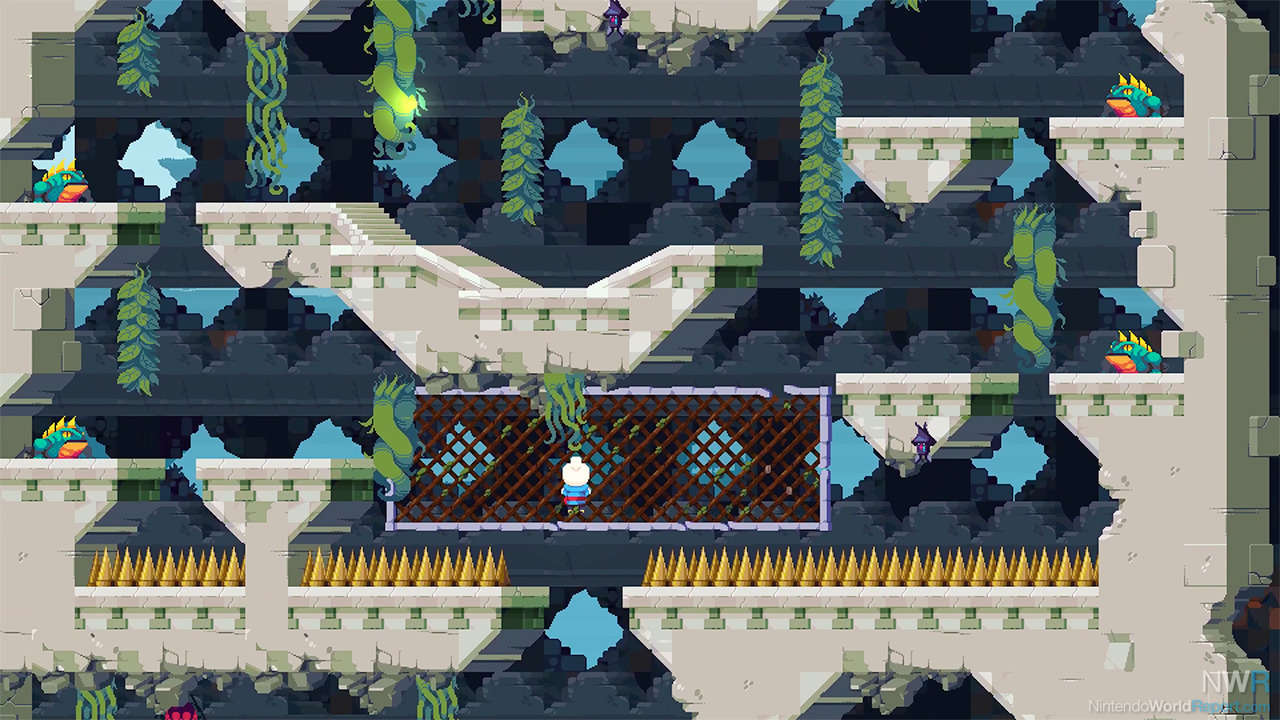 Though everything I said above is true, YesterMorrow left me with a uniquely hollow feeling even from the beginning. For instance, the starting music incorporates elegant flutes and weeping strings that are wistfully melancholic; however, this conflicts with the point in the story when kids are playing tag and hide-and-seek while the adults prepare a festival. It’s musically beautiful, but tonally discordant within that point of the story, and this issue appears again and again at various other points. Beyond that, most characters, though elegantly rendered, are little more than static signposts, pointing you to your next task. I once came across a child in a cave hiding from the shadows that captured his family, but once I had rescued his family and saved his town, he remained in the exact same spot delivering the exact same fearful dialog. Add onto this a lack of voice acting or even just basic speech sound effects, and you’re left with beautiful husks rather than true characters. The world is full of color, but devoid of life.

The gameplay also has its own share of shortcomings beyond my technical gripes. Between dungeons, I’d often feel lost without any reassurance from the game that I was going in the right direction.There is a map for which you can collect pieces to fill in, but it’s practically useless and serves mostly as eye candy. It doesn’t show you the way you need to go or give valuable information about your location. Plus, the disastrous technical condition of YesterMorrow made me lose confidence in the game’s basic design. More than once I found myself lost or stumped on a puzzle, unsure if it was a glitch or my own ignorance holding me back. 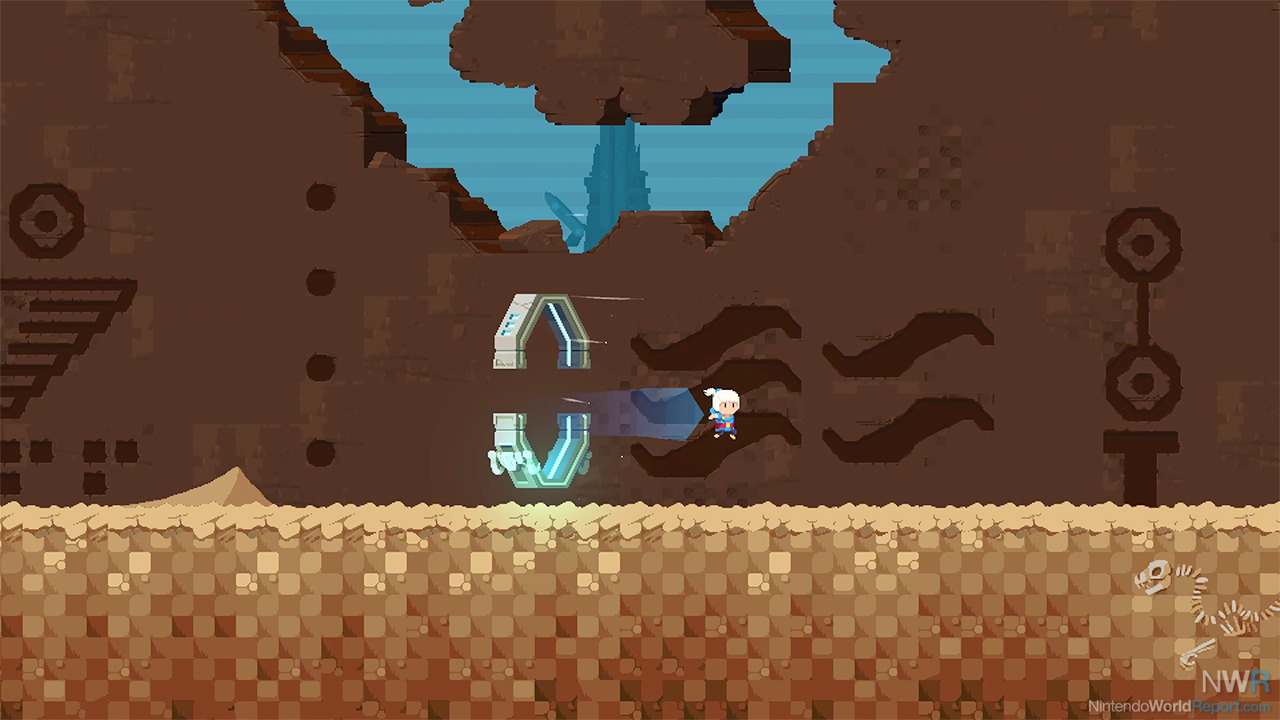 Typically, I try to think of who would want to play this game, even if it wasn’t one that I particularly liked. What audience would this appeal to? Is there a special use case or niche that this game fills? Honestly, I don’t have an answer to these questions. YesterMorrow could have been a real solid platformer, but it was released far too soon; more work is needed to bring it up to a point where it can be enjoyed. There are moments where YesterMorrow’s tight controls, level design, and artstyle all come together and shine. Unfortunately, the mountain of technical issues and the empty world eclipse any hints of excellence. At the end of the day, YesterMorrow is an incomplete, broken game, and broken games are neither for yesterday or tomorrow.