Can this math puzzler amount to more than the sum of its parts?

Taking inspiration from both sudoku and block-dropping puzzles like Tetris, the goal of TENS! is to line up dice in such a way that the sum of either the rows or columns is ten. Once you succeed, the dice clear away and add to your score, making way for more dice to be added; if the board becomes so congested that you can no longer make any moves, then you fail and can try again. The game revolves around making the most out of the dice you are given and playing around any obstacles on the board, going for either easy tens or opting for higher scoring combos. It’s a simple, yet engrossing design that feels right at home on the Switch.

There is a pleasant tactile element to the feedback of TENS! that elevates the experience of playing. Scrolling through tiles elicits a soft clicking sound, placing a die has a satisfying snap and completing a line makes great use of the Switch’s HD rumble. The best way to put it might be that it’s like playing with bubble wrap; it has that same snappy gratifying feeling. This is complemented by a colorful UI, and a soothing soundtrack. Admittedly, there are only a handful of tracks that end up on repeat throughout, but they’re a gentle and calming presence that sits nicely in the background so they never became grating to listen to over and over again.

Players can choose between three modes: an adventure mode, an endless mode, and multiplayer. Adventure is a campaign featuring ten worlds with five solo puzzles and two boss encounters each. There is a gentle difficulty curve as these puzzles slowly demand more from the player in terms of both score and skill. At the start, levels are simple no-frills puzzles; but as the adventure goes on levels begin introducing special tiles that add a layer of challenge. For instance, some tiles are blocked and must be played around, others may be burner tiles that destroy dice, but my favorite are the re-roll tiles that add a bit of RNG by rerolling dice for a different number that may help—or hinder—the player’s progress. 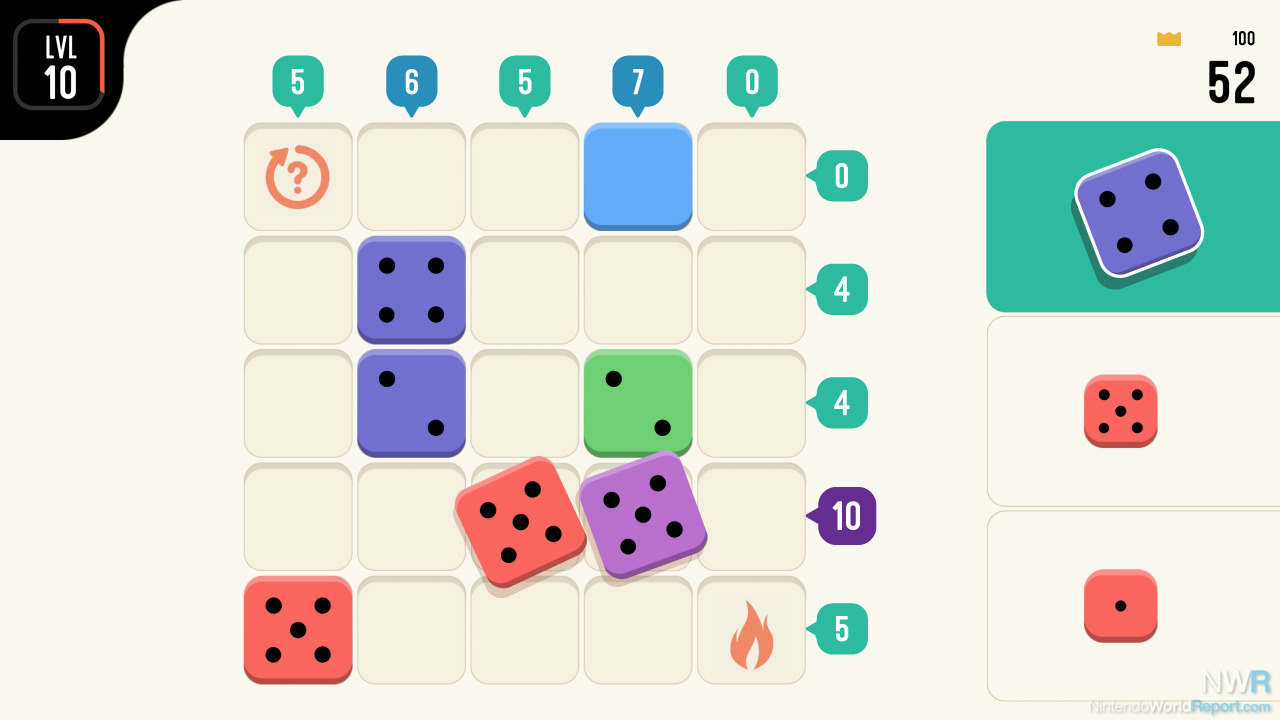 The bosses in adventure mode will feel familiar to fans of similar competitive puzzle modes. These encounters are head to head matches where each line completed by one player may inhibit the other by producing blocker tiles. These feel especially different from the rest of the levels by changing the typical slow methodical pace to a much more frantic one that demands fast thinking to stay ahead of the AI competitors. Some of these bosses were my favorite parts of TENS!. I’d even routinely come back to play one after beating the campaign whenever I had enough of the vanilla experience in endless mode.

Endless mode is exactly what it is said to be on the tin. Much like standard Tetris, endless mode is a game of TENS! that only ends when the player fails. But without the ramping intensity of Tetris or the special tiles from the campaign; the likelihood of a game over is rather low. That’s not to say Endless mode does not have its place; just that it’s better suited for those looking to zone out and decompress rather than anyone looking for a challenge. 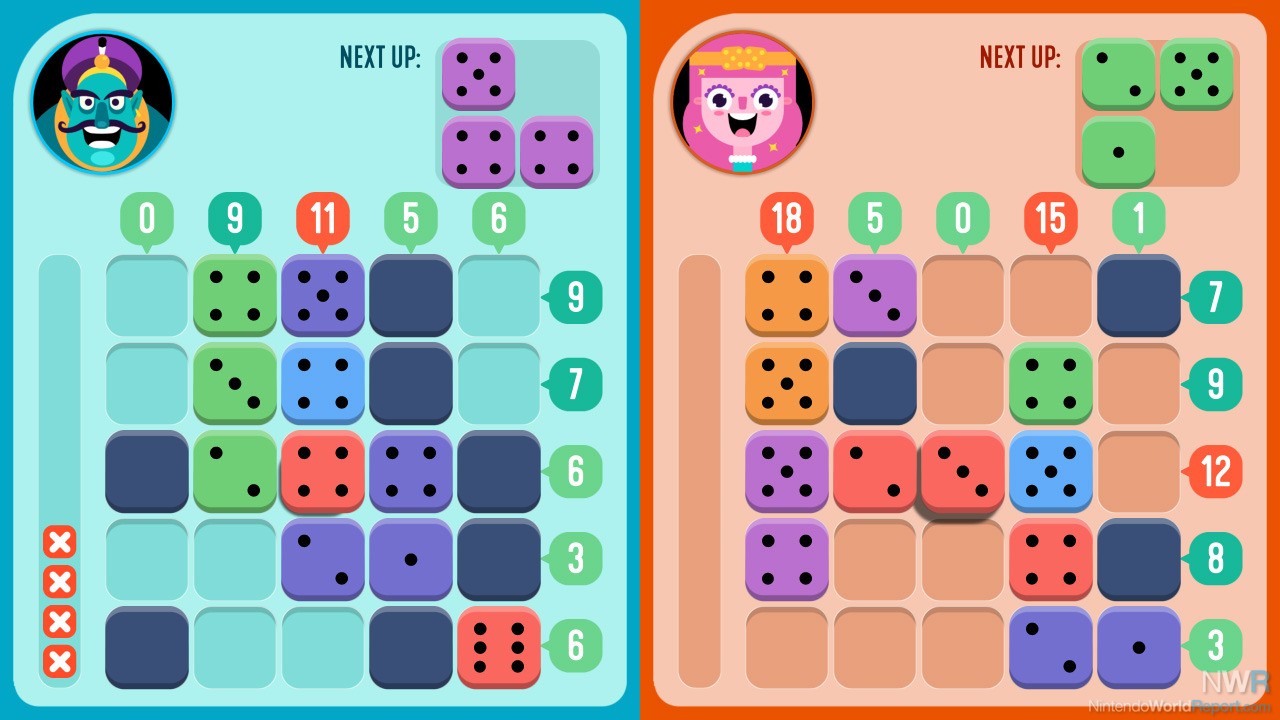 Multiplayer is exactly like the boss encounters of adventure mode but player versus player. There is no option to play against AI which is odd, but since bosses from adventure mode can be replayed, that is not much of an issue. What might be a real issue is the lack of online multiplayer. If that is something that is important to you then look elsewhere; I know that for me puzzle games are more of a solo experience, so it did not bother me much. Multiplayer is still plenty fun, in the same way that the bosses are fun, even more so since it’s with another person.

The one sticking-point that keeps TENS! from being a standout is that it just doesn’t have much to offer once the adventure is done; especially when considering contemporaries in the eShop that are more ambitious or offer more reasons to stay invested. Bigger may not always be better, but TENS! struggles to completely justify its value amongst the competition. 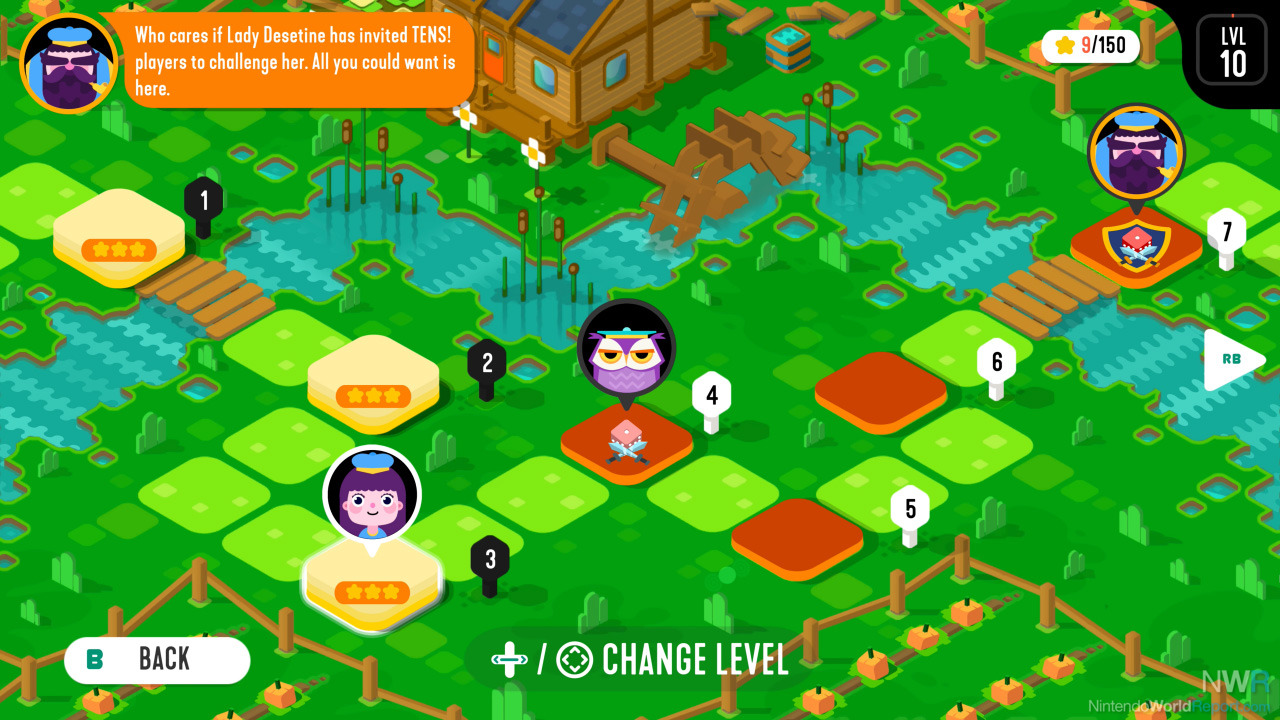 TENS! is like a piece of bubble gum; it’s colorful and even delightful in the moment but loses its flavor too soon. That doesn’t negate the fun I did have though. I really enjoyed my time with TENS! as a casual palette cleanser between bigger releases, and it’s convenient to be able to quickly pull it up on my Switch whenever I feel the itch to play a puzzle or two. It’s not hard in the slightest, though the later puzzles in the campaign may have tripped me up a couple of times; I never felt like I was hitting a wall. Instead TENS! delivers relaxing puzzle gameplay that is just engaging enough to have your attention without ever pushing you to the point of frustration.