Rough play is the name of the game.

HyperBrawl Tournament is as simple as sports games come: your team must throw a ball into a goal and stop the opposing team from doing the same. Only issue? This ball game is also a fist fight.

Each match has you knocking out opponents with punches and kicks, wielding items on cooldown like hammers, bombs, and swords to defend or gain an opening to score. Once a player is knocked out, they are out of the game for a few short seconds and then respawn near their goal. Matches play out in a series of rounds, typically lasting 90 seconds, in which teams of two must score the most points to win the round; whoever wins the most rounds wins the match.

The short length of the rounds paired with the aggressive brawler gameplay and small arena-like stages create a very tense environment for every match. Because the stages are packed so tight, goals are easy to reach and points rack up quickly; it only takes a clever juke or a critical knockout to score that next goal, so each match feels like a tug-o-war. Even if one team takes a sizable lead in one round, the scoreboard resets for the following round, leveling the playing field so no one can get too comfortable. This ingenious design leads to several white-knuckle moments that make each match exhilarating to play. 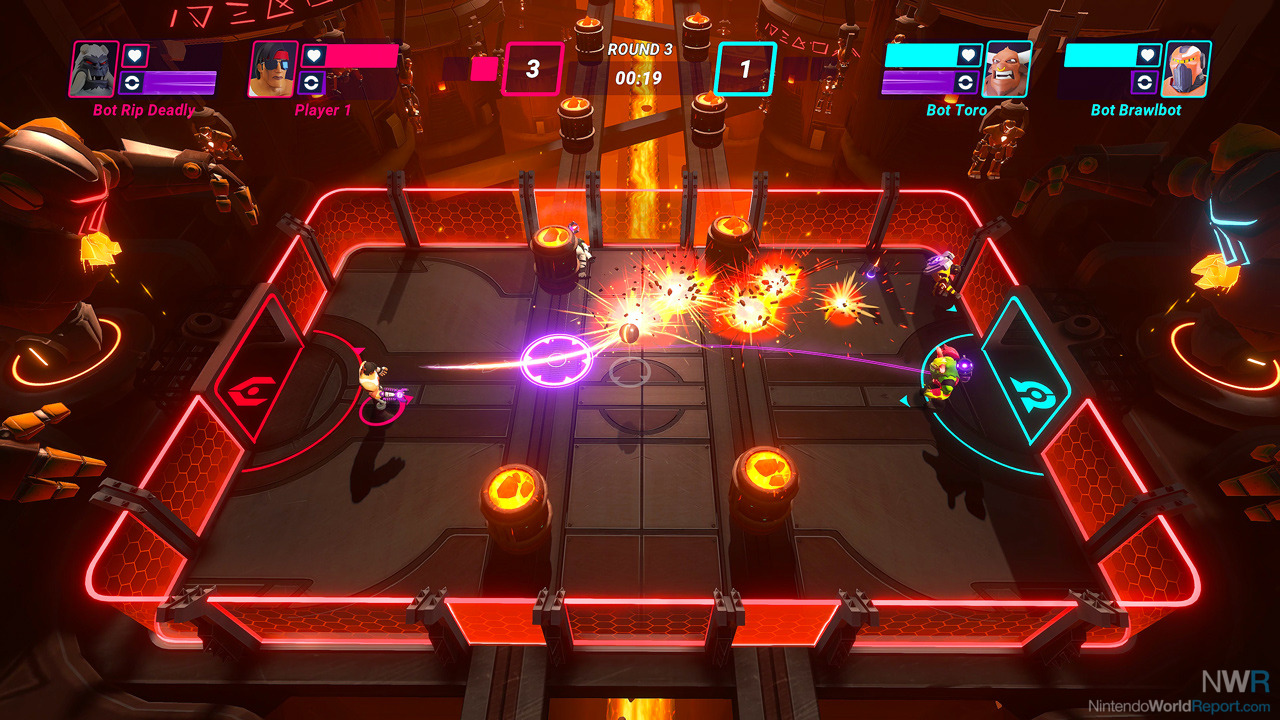 The colorful cast of characters and a clean aesthetic complement the gameplay. Each character feels like they jumped out of a comic book panel or an action figure in the toy aisle. None of them are particularly memorable, but they enhance the game just by being so cartoonish and varied. Each character is also different in gameplay, typically landing somewhere on a spectrum between weak, frail, and quick to strong, tanky, and slow. The speedier characters are great at weaving through the stage and scoring quick goals, while the bulkier ones typically score best simply by punching any obstacles out of their way. A major strategy then is in how you compose your team: Do you want a dynamic duo of both speed and strength? Or, would you rather min-max in one sort of playstyle? Or maybe you want a balanced approach with two well-rounded characters? Though it was easy for me to find my preferred team, the characters are well balanced enough that no pairing feels particularly overpowered or particularly weak.

Each character can be given an item to wield on a cooldown. These range from offensive attacks for quick and easy knockouts to more supportive options like a barrier to block shots on goal. Players also have the ability to tap into the HyperForce, a charged up status that makes players faster and exceptionally stronger. Both the items and the HyperForce may feel overpowered to newcomers, but there are ways to play around these variables. 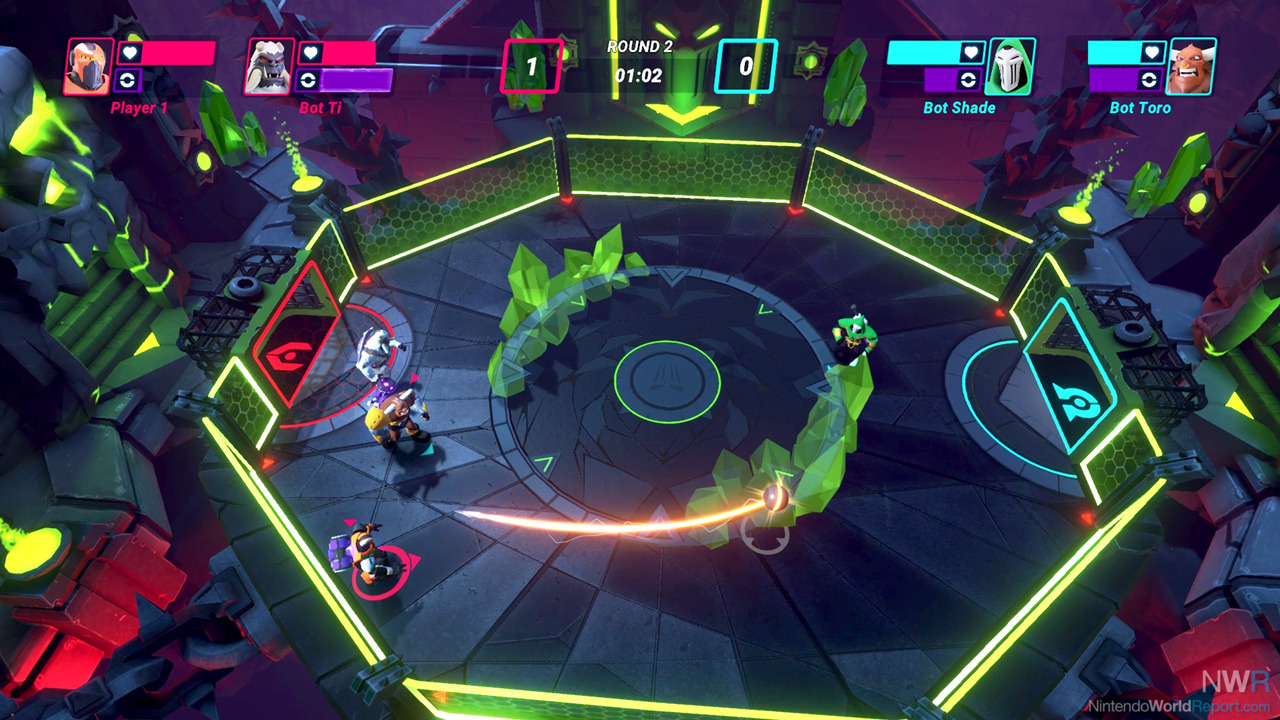 You’re presented with nine characters at first, but as you progress and level up you will unlock a few more. In fact, progression is a crucial part of HyperBrawl’s gameplay loop. Taking a queue from modern competitive games like Overwatch, as you work through the campaign, compete online or complete objectives, you will accumulate credits to purchase cosmetics and experience points for level ups, which unlock characters and reward you with loot boxes. These loot boxes, called Artifacts in-game, randomly reward skins, victory poses, and other cosmetics. As of this review, Artifacts are not monetized and are attained via natural game progression or spending the in-game credits; some skins, though, are paid-only through optional DLC.

That said, it’s hard to get too invested because there is no story to speak of and the characters, as colorful as they are, never really talk or express themselves. Sure, character bios give the player a loose idea of who these people are and the occasional flavor text might provide context for why HyperBrawl exists, but it’s all rather barebones. The campaign itself is really just a season of HyperBrawl and a tournament, so it’s more a series of matches than it is a true single-player story. 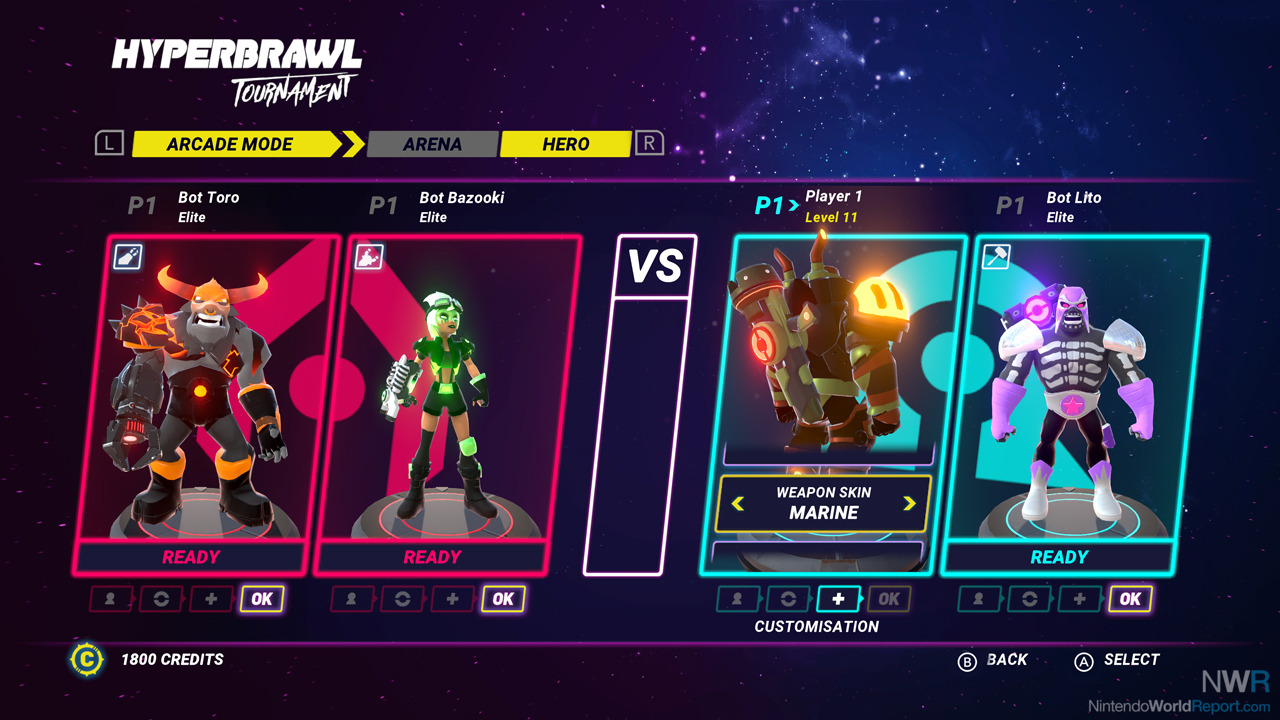 Thankfully, there is multiplayer. You can play up to four players locally or online and participate in 1v1 matches online in Blitz mode. If you want to just play against AI, the three difficulty settings are really well tuned despite the few options. The online is pretty reliable within the match; however, there are some rather glaring framerate dips before and after each game when viewing the character models. I’ve also experienced freezing after online matches that forced me to reset, but thankfully this has never impacted performance while playing either docked with ethernet or wireless in handheld mode.

What is actually a problem is the lack of options for matches. Whether online or off, each match plays with the same 90 second round, best of three ruleset. There is no way to change this ruleset, turn items off, or remove the HyperForce. This is especially frustrating because two different rulesets are in play in the campaign, but access to those is not available outside of said campaign. This would be understandable for the online Blitz mode where quick matchmaking is important, but to see no options in online private matches or the offline Arcade mode is disappointing.

HyperBrawl’s beat-’em-up-meets-sports gameplay is frantic fun that leads to tense matches and clutch moments. The progression means that you have things to work toward if enticed, but the lack of story and multiplayer options may limit your willingness to get too invested. Still, developer Milkytea has something special here in the core gameplay for those that are interested; that interest just may be short lived.