If you’re looking to take your relationship with Picross to the next level, why not date a puzzle piece?

Pixel Puzzle Makeout League has been on my radar since playing a demo at PAX East 2020. The concept of blending the stylings of nonogram puzzles (or to most of us: Picross) with a dating sim seemed weird but potentially great. After playing the final version, this game lives up to the promise by leaning hard on the joke. The puzzles are fantastic, with potentially one of the best Picross feature sets on Switch, and the daffy premise of a puzzle-centric superhero league that is trying to save a city while the main heroine tries to date her teammates is just stupid enough to stay amusing and compelling. 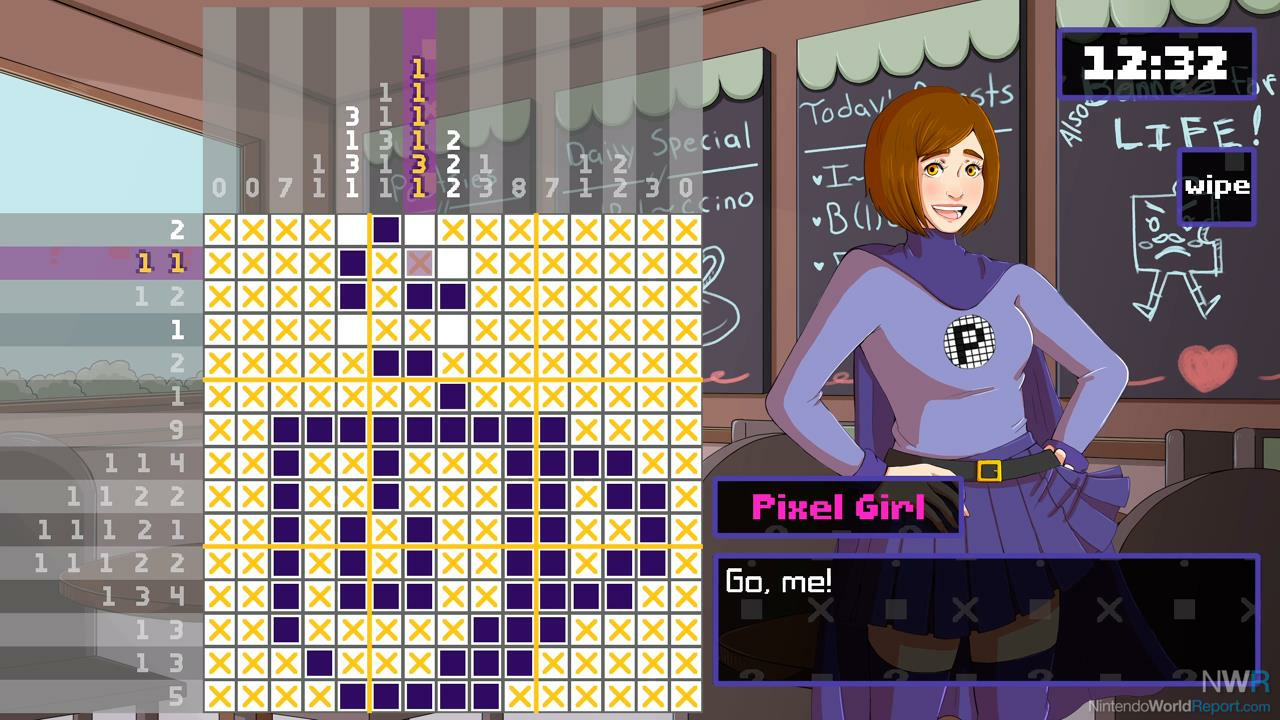 With more than 250 puzzles, the amount of Picross to play here is significant, though it’s worth pointing out that if you’re just here for the puzzles, it takes a while to get access to just puzzles. Most are found along the way in the story with a maze introduced early that is the only way to mainline Picross. The flexibility and layout of the puzzles is top notch, however. The gold standard for Picross is Jupiter’s Picross S series. Many have come at the throne; most have missed. The developers at Rude Ghost are rivaling the throne, at least by besting them in control options. Pixel Puzzle Makeout League features touchscreen controls - something that hasn’t been present in a Jupiter-made Switch release. Those controls are well implemented here, though I ultimately prefer button controls, which are as good as ever. On top of the control options, the difficulty can also be customized. If time pressures worry you, you can take the timer away. You can toggle hints on and off. You can have rows auto-fill in when you fill in squares. These can be changed easily and do a fantastic job of making the game more approachable or less forgiving, depending on your preference.

The puzzles are good, but what about the dating sim wrapper? It’s incredibly tongue-in-cheek, laden with silly gags and references. You control Pixel Girl, a new superhero who joins the Puzzle League. The other heroes are shy gamer Sudoku, the methodical leader Chess, the stoic Crossword, and the horrific mutant alien puzzle piece Piecea. Through a retro-styled world map, you pick which character you want to spend time with and a handful of date sequences sprout up as you work your way through a relatively straightforward story. There’s a mysterious Villain who has ties to Pixel Girl and then a giant Puzzle Tower starts reigning terror and, well, it’s a whole ridiculous thing. While dating is indeed something that happens in this game, it’s much more a charming and cute narrative that you occasionally diverge on a side quest of sorts with specific characters. 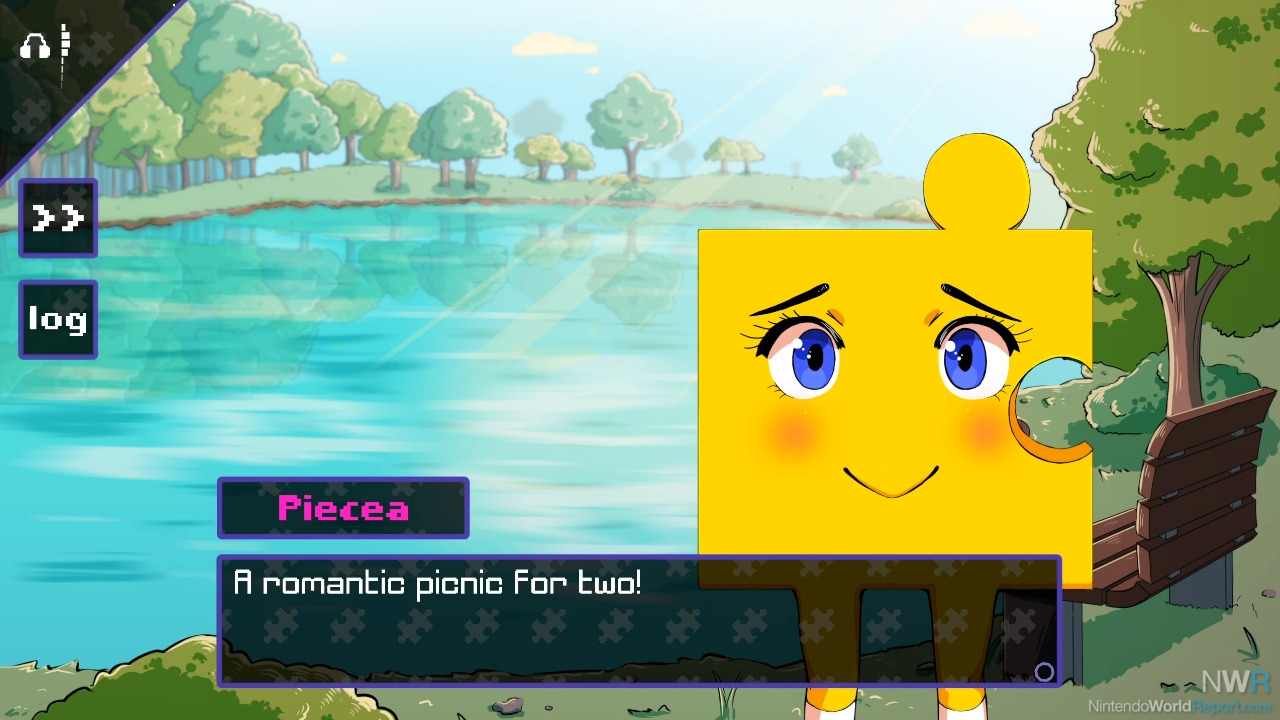 The story here is enjoyable. It manages to thread the needle of being incredibly bizarre and borderline preposterous while still having enough of a warm, beating heart. The inane scenarios regularly claw at human emotions in a way that elevates the text just enough to not be a total joke. But aside from the solid writing, the story also works because it does a great job of integrating Picross puzzles as your engagement with the world. It’s noticeable that the plot drags when it’s a long stretch of dialogue without puzzles. Picross is the inflection point that makes this whole crazy adventure work. Thankfully, the puzzles usually come at a regular clip and don’t necessarily follow a linear progression of difficulty. They often reflect the scenario in the world. Is Pixel Girl dealing with a life-threatening situation? Well, that’s going to be a tough 15x15 grid. Is Pixel Girl ordering a sandwich? That’s likely going to be a quick 5x5 cakewalk. The story has multiple paths and a lot of secrets that I won’t spoil other than saying sometimes the gameplay changes in weird ways. You have to go through the dating scenarios with all four suitors to get the true ending, which is well worth doing for both the story and the puzzles. Sorting through what you have and haven’t completed is a tiny bit clumsy, as it involves jostling around different maps, but it’s easy enough to just run through where the story branches. By the end of my first playthrough, I was struck by how much I actually wanted to see what happened with the other character stories. Some of it is because concepts like a giant puzzle piece you can date are absurd, but it’s also because I enjoyed the world a lot. 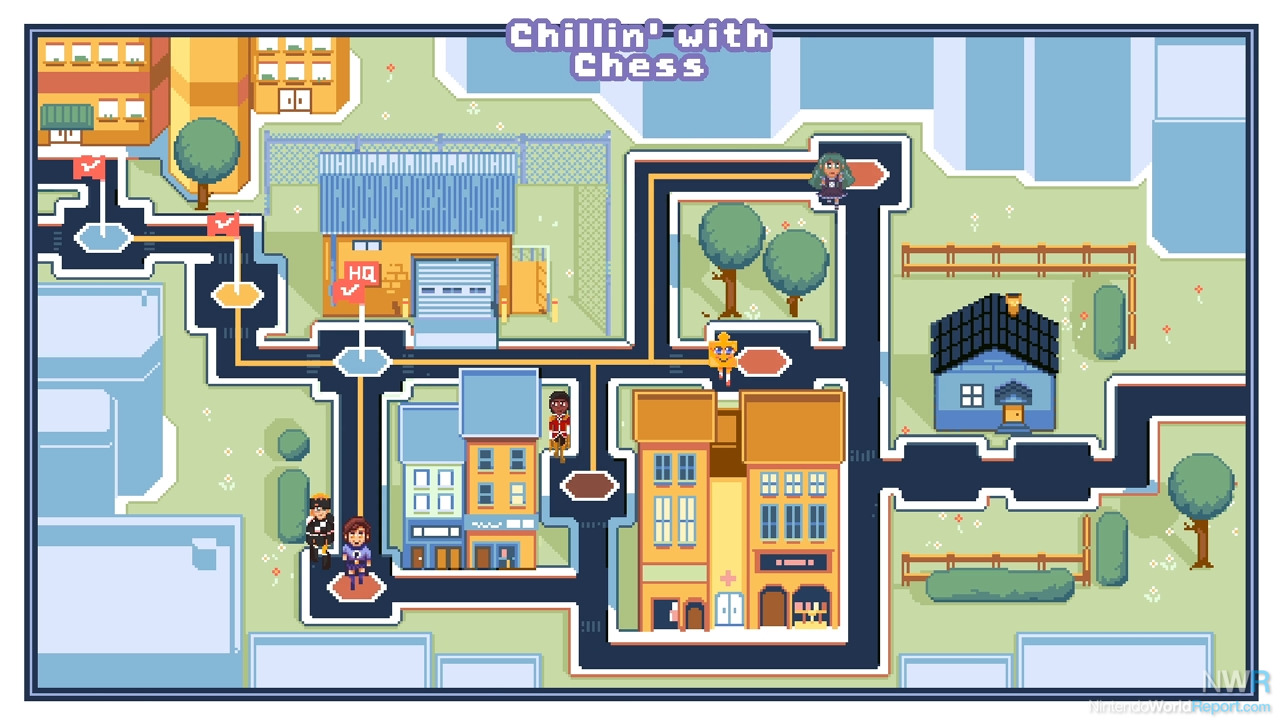 Pixel Puzzle Makeout League does one of the best jobs I’ve seen of fusing Picross with another genre. The puzzles are awesome, the world is wild, and the story is engrossing. I only have the faintest critique for this game, as there are a few stretches where the story drags, but it’s likely I felt that way because the Picross on display here is well-designed with some of the best usability features the puzzle style has ever seen. This is a great example of a peanut butter/chocolate-esque genre fusion that works better than the joke idea it seems like from afar.