Earth is being attacked by an evil alien race known as Phasmids, and it is your job as the crew of a United Defense Force ship to fight back and eliminate the alien threat. This is about as much story the player receives in this follow up to developer Runner Duck’s freshman outing, Bomber Crew. As the second game in the Crew series, Space Crew offers vessel maintenance and strategy simulation akin to Faster Than Light. But unlike Faster Than Light’s emphasis on roguelike elements and choose-your-own-adventure style game progression, Space Crew puts all of its focus on combat encounters. Unfortunately, all of these play out so similarly and are dealt with in such a similar fashion that once you figure out how the game works, Space Crew devolves from spaceship battle strategy to spaceship battle maintenance.

Despite the choice of different mission types—be it escorting a freighter, dropping a probe, rescuing an astronomer or clearing out enemy Phasmids—each mission invariably plays out nearly identically. You pilot your shuttle, hyper-jumping from zone to zone until you reach your destination, complete your mission’s objective, and then jump back retracing your steps back to the UDF’s space station hub. Most zones you jump to are arenas for battles between your ship and dozens of enemy fighters. This is the meat of the gameplay. 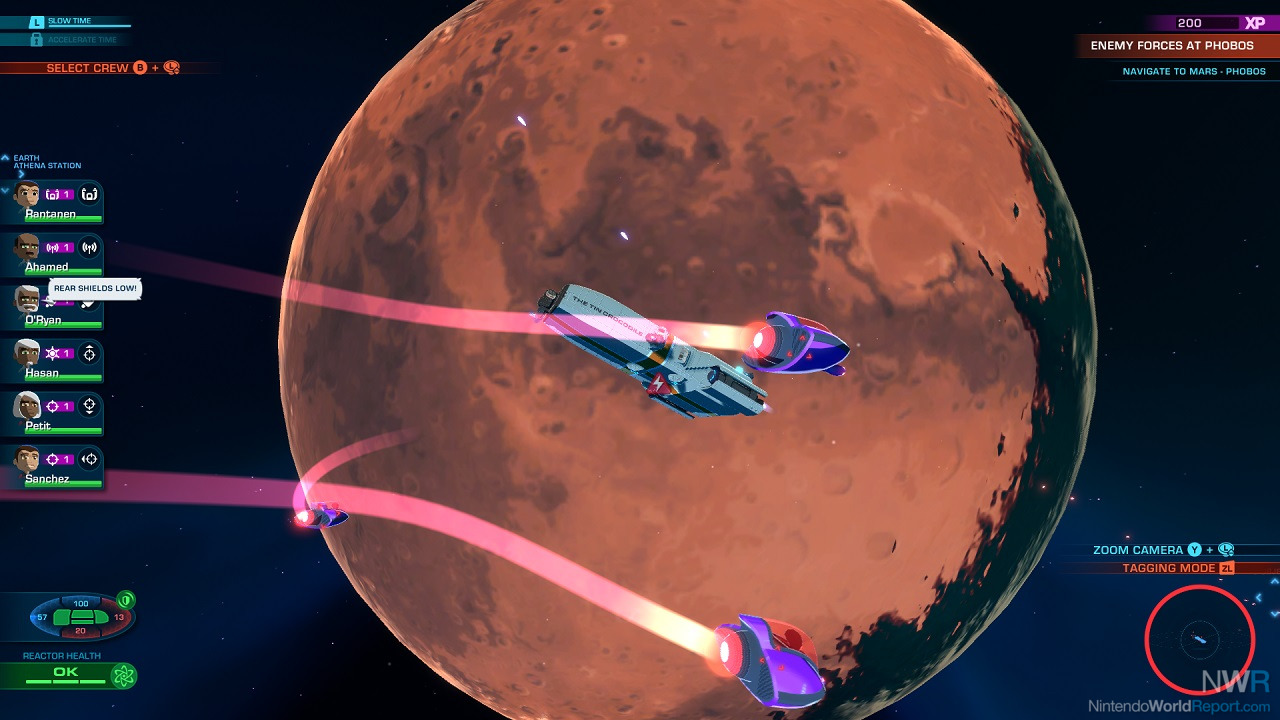 These battles are initially exciting as you learn the roles of each of your customizable crew members. Having your engineer transfer power from engines to weapons as your captain steers wildly with his evasive piloting ability so your weapons officers can unload as much damage as possible while avoiding incoming fire is exhilarating, at first anyways. So is ordering your security officer to grab a phase rifle to eliminate a Phasmid boarding crew and cleaning up the aftermath of the wreckage with your engineer as the battle continues raging on just outside the safety of the quickly depleting shields. However, once you know the solution to each problem the game throws at you, tactical decisions fade into rote routines that are never truly challenged or strayed from.

And perhaps even that could be forgiven. The gameplay, though repetitive, is engaging in short bursts. Going through the combat routine is almost meditative; playing it while having a podcast or a show in the background is a fine way to relax and unwind if that is something you are looking for. That said, the missions themselves can drag—playing through one can mean up to twenty minutes or more of nearly uninterrupted combat—and once you string basically indistinguishable experiences along for 6-10 hours, you begin to space out. 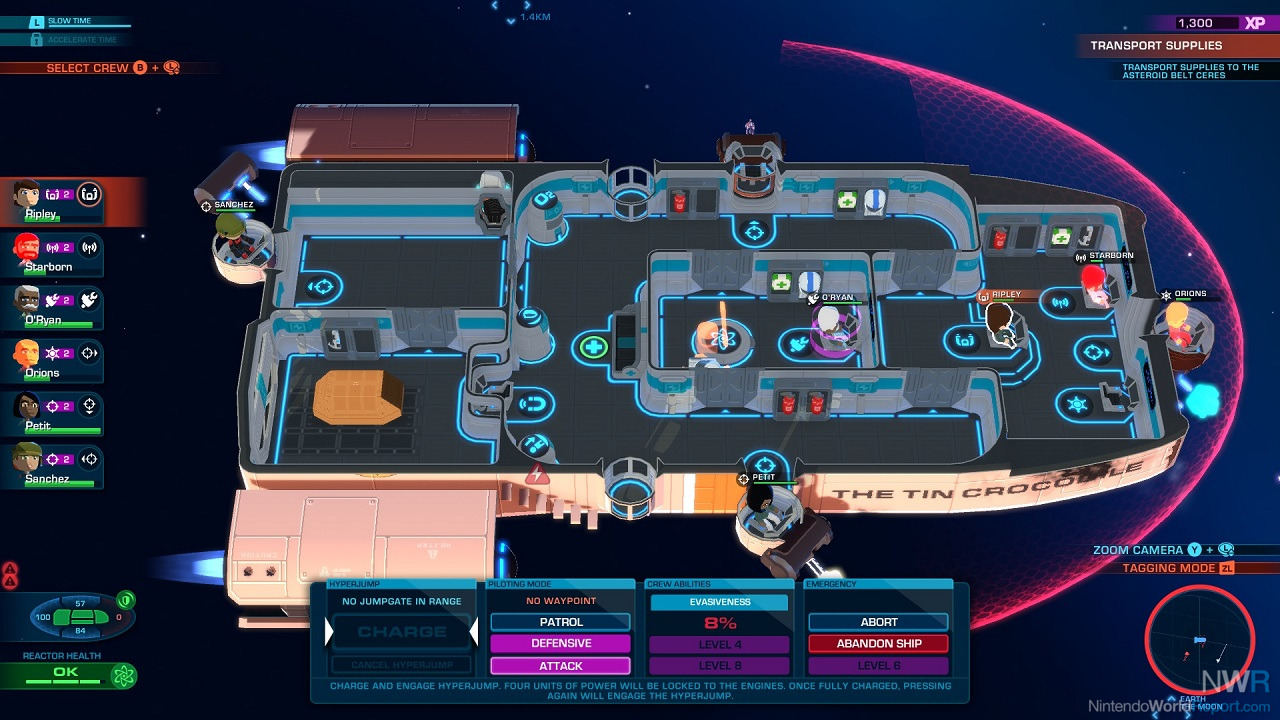 It's worth noting that if a crewmember does end up fainting without being revived, then they die permanently. However, permadeath is not much of a threat when you can easily exit out of the game and start the mission over again, and if you do lose them for good the game will produce a replacement at the hub, albeit with lower stats. Yet once you know how to handle each situation, a dying crewmember will rarely ever happen, let alone be an issue.

Thankfully, the character and ship customization between missions does help break up their monotony a bit. At the Athena Station hub, you can deck out your crew with different gear, customize their appearance, and assign secondary roles once unlocked. Similarly, the ship may also receive upgrades to weapons, engines and systems paid for by credits accrued from both story and side missions. You’re presented with many viable options and it feels good to customize according to your playstyle and then immediately feel the difference once you set back out for another expedition. 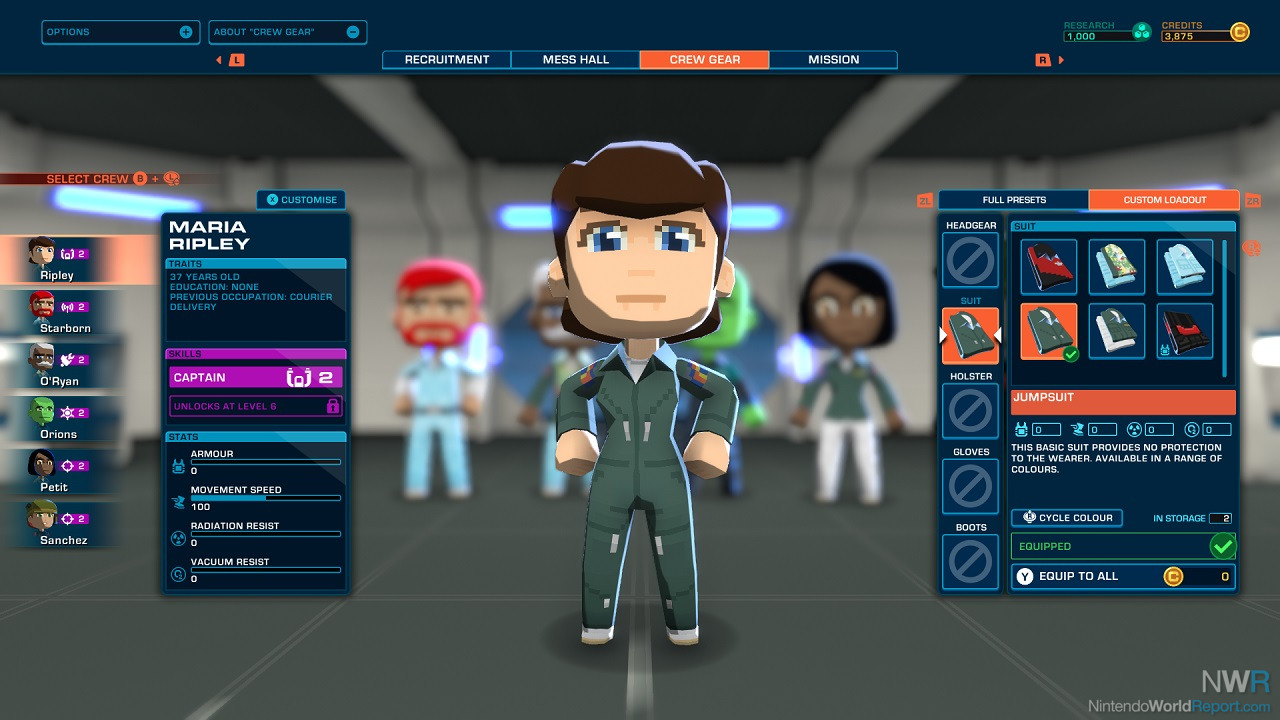 The presentation and Phasmid champions are two other positives. The chibi characters and faux-Star Trek aesthetic never astonishes but always pleases. There is a charm to the simple colorful look and feel of the world; this is especially true of the Phasmids. Periodically, a Phasmid champion will show up with a horde of starfighters to put a stop to your campaign and taunt you while doing so. Some are typical arrogant bullies, and others are sadists looking to torture you, but the worst has to be Valadu Appakutt, a particularly annoying champion that relentlessly torments you with pop culture references. Although these named alien characters’ barks are much worse than their bites, they provide just the right amount of Saturday-morning-cartoon villainy to make defeating them that much more satisfying.

Ultimately Space Crew does have some notable moments and gameplay ideas, and it’s astounding that Runner Duck, a very small team, developed a game of this scale. But the core gameplay loop loses its luster far too quickly and drags on for far too long to give a full throated recommendation. That’s not to say this game doesn’t have its place; if you’re interested in space sims, but the complexity or difficulty of other games in the genre has put you off, then Space Crew may be for you. If you’re a vet of the genre looking for another dazzling adventure, though, then stay far, far away.